It happened so fast.  The abrupt end of the Ramshorn Porsche Rally opened up the new chapter of this epic ride — Paula was flying in to Bozeman to go for a 5 day trek at Yellowstone National Park. 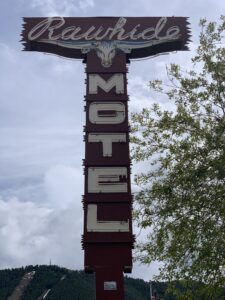 My Porsche was packed and shipped in the late afternoon of the last day of the rally, heading back to Boca Raton.  Igal was prepping to go back to Toronto.  I was organizing my gear for the next legs — split up the clothing and gear for the next leg of my motorcycle ride home to be stored in the Bozeman, Montana hotel.  This means that I had to pack enough clothing for hiking in Yellowstone with Paula.  Done. My beloved BMW R1200GSA bike is sitting in the hotel parking lot — waiting patiently for its next 1,800 miles of touring home after this Yellowstone leg is complete in a week.

Its now morning and almost time to pick up Paula at Bozeman International airport.  Igal is now gone on a flight to Toronto…  First, I have a mission to get my paperwork done, signed, printed and organized to get my China and Russian Visa’s for my next motorcycle trip coming up in July.  I had to go to Fedex to do the dirty work but anyway, I got it done — packaged my passport along with paperwork and photos couriered to the travel Visa office in Houston.

Anyway, let’s do it again — a new adventure.  Paula and I haul off on my rental car to our destination, the Yellowstone Lake Lodge inside the park — how exciting.  The ride is about 3 hours around just beautiful Montana and Wyoming countryside — but not just any countryside…. Seriously mountainous, snowy, rocky, aggressive and hard living, off-the-grid countryside.  If you’ve never been, go.  Its an experience to see two massive states with little or no people living there — just empty and beautiful scenery and roads.  We got through the Yellowstone gates, traverse through the much bigger than I could 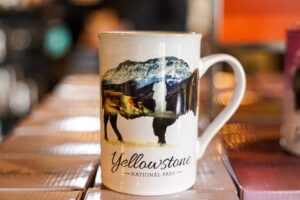 imagine park shadowed by dozens and maybe hundreds of bison — which is clearly the theme for the park — Bison rule Yellowstone — these massive and broad mammals  roam everywhere.  We did pass an area where traffic stopped, a large gaggle of people with cameras lining the road — why?  Well, a bear sighting.  Yah, that’s it.  I stopped, but honestly did not care much and moved on, but apparently it’s a big deal.  The park if your interested is about 100 miles long and probably 35 miles wide — its huge.  In fact, its 3,471 square miles… Big enough?  Not sure?  Well, its Three times the area of the entire state of Rhode Island!

So nobody told me one very important piece of information when going into a National Park…  At least Yellowstone.  NO Cell coverage and NO wifi and No data coverage.  Fuck that.  I’m a trooper, but not that big a trooper when traveling in the United States.  Sure, traveling in 3rd world countries, but not America — nope, I won’t be happy.  Four days without cell or data?  Forget it.  Even crazier, the nice lady at the reception said there were no restaurants open in the park other than the hotels basically and you had to pay a ton of money to eat at over priced garbage establishments… No fast food anything like pizza or whatever…  Just a few places open and I was required to book now for the next few days at hotels around the park.  After getting to the room of this very old and historic hotel that dates back to the 1800’s and finding out about our policy of no coverage inside the park — I had to tap out.  I called the reception, told them that I needed to bail tomorrow — I got Paula to agree that we would drive over to Jackson Hole, Wyoming and hike there.  The plan was to check 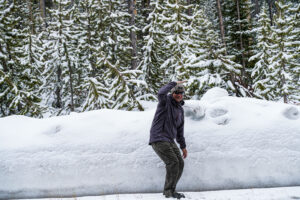 out tomorrow, drive the park over to Old Faithful and other big monuments/pools and springs —  and we did just that.

It was great to see Old Faithful and the park.  Most interesting of all, it was May 24th and the snow was piled up so crazy high along the highway — all hiking inside the park was closed.  What?  That was the point of going to the park.. Oh well, there is always Plan “B” — Jackson Hole. 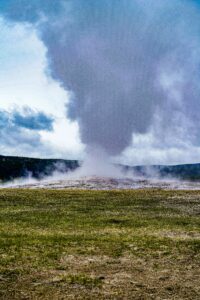 After visiting the Yellowstone tourist traps, and by the way, Old Faithful was a fun place, nice walk, no hike really, but the hourly spout was a bit of a disappointment.  Don’t get me wrong, it was nice to see by putting a face to the name, but it was a bit underwhelming.  The steam explosion was ok, but not like my vision of a giant water stream explosion — just fine.  I thought the GRAND Prismatic Spring was way, way more interesting.  We took a stroll over there – in Yellowstone terms, a 30 minute drive, parked and walked the hour trek over to the spring… So beautiful.  So beautiful — worth the visit for sure.

I will say that the drive between Yellowstone and Jackson Hole took us through the Tetons National Park and Forest.  Never heard of the Tetons?  Go look it up.  I think you will find them super interesting and 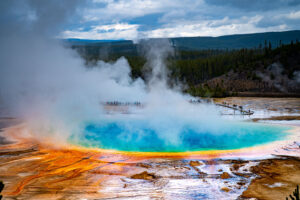 beautiful. Basically, its a national park but ended with Yellowstone, shadowed everywhere by a series of mountain peaks called the Tetons.  Apparently one of the more beautiful parks but as usual, Paula and I had a small adventure there.  We stopped at a Park Information Center.  Learned about some small hikes we could take before finishing our ride to Jackson Hole.  I bought a bottle of Bear Spray which is essentially mandatory — its bear season now.  After a few hours, we searched for some location which was supposed to be only a few minutes away.  We then took a leap and got out of the car, went up to start our small hike…  Very quickly, along the route we passed another hiker coming back to his car.  He told us that he saw BEAR scat.  It took me about less than 1 second that I was going to turn back — no chance I’m going to explore anywhere with fresh bear scat even though I just spent $25 on the bear spray and got a lesson from a snarky park ranger…  That was our experience hiking the Tetons.

Paula and I spent the next 2 days exploring Jackson Hole, explored, walked the quaint town, did a bit of hiking up the ski mountain.  Nice.  We got up the hill pretty well vertical which was only half fun — not, and when we crested, it was a super nice walk around the peak of the hills — overlooking the Tetons in the backdrop.  Just jaw dropping and inspiring.  Technically easy, but beautiful. 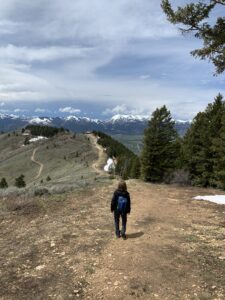 Checking out from Jackson Hole meant that we had a 4 or 5 hour drive back to Bozeman — backtracking through the Teton National Forest, through Yellowstone and finally the Springhill Suites where we stayed over and woke up the next morning…  I drove Paula to the airport where she flew back to Florida.  I dropped off the car, took a taxi back to the hotel – picked up my bike and booted to my next destination … Mount Rushmore in a couple of days.