I’ll save the best until the end.  Learn about UNESCO and this colorful mountain range below.  Remember you can click on any picture to enlarge.

North Western Argentina is like living on the moon.  So far from a nice hamburger with fries.  More like a plate of beans —  a desert environment with inhabitants scattered in towns who share the same beliefs as their Bolivian and Peruvian neighbors — Inca culture and Roman Catholic religious lifestyle.  Somehow, both mix when they should not.  I guess the Inca culture trumps the Catholic religion — but gosh, it has never made full sense to me on my travels in Peru.  People’s cultures are Inca and Religion is Catholic, there, thats it.

So let’s say you make your way to Salta in Argentina, which is the main city in the region in the north of the country.  Not sure of how many people live there, but its their version of a cosmopolitan city — my guess is 100,000 people.  But its not cosmopolitan.  Still, it’s virtually crime free, very poor and a hard life.  Our guides were definitely proud of their town so thats nice.

We stayed in Salta for a night after arriving in from a 2 hour flight from Iguacu Falls.  Woke up and took the 3 hour drive up north to Jujuy (pronounced hu-hu-e) province and past that city to a place called Purmamarca.  To be honest, not sure where we went?  But trust me, remote, yes.  We stayed at a hotel (sort of hotel) and it had NO television and virtually NO Internet.  Painful again.  Salta, just a few hundred miles south was like New York City compared to the town of maybe a thousand which we stayed in.  Houses in this region are as they were made thousands of years ago — adobe style at best, hand made mud bricks, mud roofs reinforced with a local kind of bamboo and a horrible example of cement floors which seem to crumble way too much.  Some houses seem abandoned but I’m told people live in them.

The idea is to enjoy the nature of the mountains which are unique.  The entire mountain ranges are both desert and colorful.  Real strange, but interesting.  Here goes my explanation.

The mountain on the right is called the 7 color mountain.  I guess if you see it in real life you would see more of a “pop” in colors 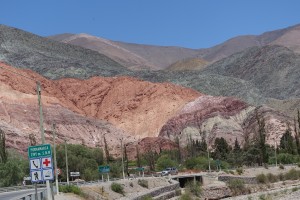 than the picture.  Ok, so big deal, right?  No, it really is a big deal.  Scientists from UNESCO have named this area is one of the 1031 most important and protected parts of the world.  Serious.  Check out the wiki on UNESCO.

What or who is UNESCO?  Its basically the United Nations Scientific and Cultural Organization.  Net of it, we Americans don’t care, but the rest of the world actually cares about this group.  They safe-guard along with the local inhabitants the 1031 most important sites and cultures in the world.  Invest money, but more important, they spend years to study and highlight and name these sites.  Many sites are named as the UNESCO World Heritage Sites.  Big deal.  Check out the region — Quebrada de Humahuaca along with Iguacu Falls.  If you want to travel and visit each UNESCO site, it would be like visiting the worlds best golf courses — one by one — but exchange that thought with the most important sites and cultures in the world’s history.

Anyway, has to be seen to be believed.

We spent the last days in cars and walking a bit — but lots of driving — to see these world wonders in the mountains. 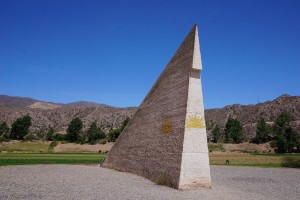 Another cool thing we saw was the marker for the Tropic of Capricorn.  I you’re not aware what that is, well let me explain from a Northern Hemisphere point of view.  Egypt, India, Bangladesh, Saudi Arabia, UAE, Niger, Western Sahara are all along the Tropic of Cancer, the northern equivalent of the Tropic of Capricorn which is in the southern hemisphere.  So the only difference is that we were in a high plateau which was about 5,000 feet above sea level so it was a bit cooler than those other countries I just mentioned although temperatures these days can reach 90 – 100 degrees and during the day in the summer in the valley here, it likely is stinking hot.

But lets not waste your time.  The highlight of the past few days.  I had just randomly read an article 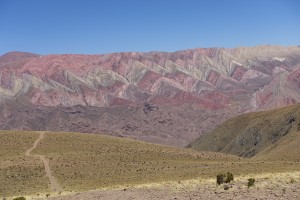 in a photography magazine about a UNESCO photographer who has taken pictures of virtually every UNESCO site in the world.  He heard about a remote mountain face where there were in fact, 14 colors — unlike the famous 7 color mountain and he said it was one of the most naturally beautiful sites he had ever seen.  This is from someone who has spent his life photographing the world wonders.  The site and location meant nothing to me while I read the article but when I saw where we were going, it was like, hey were in the same place as the article I had just read about!  One hundred percent totally random.   Only local guides know about this incredible geological find.  This UNESCO photographer took the 20 km trek over the most bumpy roads where only 10-15 trucks per day visit.  Shocking that people live there too.

Our guide knew of this very large but remote setting and insisted that if we were up to a horrible drive, it was well worth it.  Of course, I took him up on this.  How many times will I return to this place?  N-e-v-e-r.  Ok, so we did.  Let me tell you — a real bumpy and long ride to see this scene.  I held onto my seat with both hands to keep me steady during the hour drive up to the 14,000 foot altitude.  Paula slept.  I was sure the truck would blow a tire.  In fact, I did ask our guide if he had spare tires — just in case.  I don’t know how big it is, but I would guess 10 miles long or even longer.  Its hard to say since we were about 5 miles away from the range.   Huge is an under statement.  Again, you can’t envision the shocking colors but it was bright and sharp.  So sweet.  Click on the picture — its amazing.

A rare and real privilege to visit a place that very few in this world have seen.