So I was not going to write a blog for today because after reflecting the 6 or 7 hours of riding through Oklahoma into Texas.  The reason for this small few paragraphs is really for  me to remember this leg of the trip.

What can I say about Oklahoma?  I mean that literally, what can I say?  Cutting through I-40 on my bike for over 8 hours from Memphis, through Arkansas and then into Oklahoma, I saw a lot of nothing.  Flat, flat  lands, lots of cattle on that flat land, old beaten up farm houses, lots of pickup trucks.  Anything else?  Let me think… 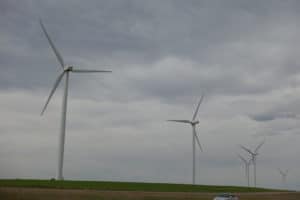 Oh yah, fucking windiest place I have seen yet — and I mean windier than any place I have been and I mean e-v-e-r.  I cant say it enough — just a fucking tiring day — and my ass was ready to take a rest from the saddle.  If I were the owner of GE, I would make life easy and just put all my investments for wind power here in Oklahoma.  Don’t bother going to anywhere else.  I’ve ridden through Yuma, California which I thought was high winds, but thats nothing compared to this place.  Big windy wastelands — but it never stops — just sustained killer winds.  I’m watching tons of trucks being pushed into the side of the road, only to fight their way back.  My head was like a punching bag thanks to the buffeting.

After passing Oklahoma City, which I thought would be great to see, I was pretty disappointed.  Like most American cities, its pretty old and I saw one large modern building, the Devon Energy Center building which at 52 floors dwarfs the next closest.  Otherwise, its a big yawn, from the highway anyway.  I cant imagine it to be much nicer inside the town.

pushed over and into trucks, I was happy to finally get to my resting spot for the night just outside of OKC.