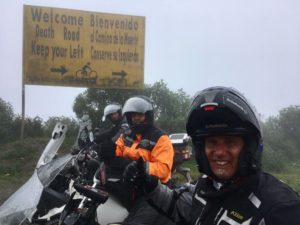 Feature image is of a rainy sign which says “Welcome — Death Road — Keep Your Left”.  Oh, on the picture to the left here are a bunch of wet people on motorcycles — including me.

Definition:  Sleep Deprivation…  sleep dep·ri·va·tion — noun — the situation or condition of suffering from a lack of sleep.

Where am I going with this?  Well, 3 days ago we were sitting at dinner and the guys were talking about the excitement of going to La Paz and then discussing about riding on the camino de la muerte.  What pretel is the camino de la muerte I asked?  They all looked at me kind of funny — It’s the Death Road!  Seems that the boys have been looking forward to this for a while.  I had no clue.  So they explained the Bolivian Death Road to me and I will help you. 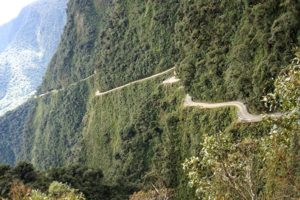 Its a road just about 120 km from La Paz, Bolivia and it is also known as the Most Dangerous Road in the World because about 300 people per year died on this road before they built a new highway which made the Death Road obsolete.  What makes it so insane is that it is a 50 km gavel road that hugs the mountain side and starts at about 3,000 feet and goes up to about 15,200 feet with only at most 20 feet between the mountain wall and the sure death.  Some areas apparently are as little as 10 feet wide or less.  The issue is that there are no guard rails so your looking down the entire ride — and its a big drop should you drop your bike.

So hence the sleep deprivation for the past 2 nights.  I keep getting the premonition that I will drop on the narrowest part of the road.  I’m pretty tired now. 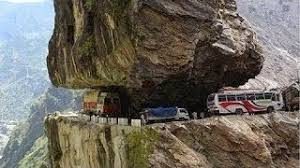 Anyway, I decided that I am 100% in.  I am going on the road.  No way I’m going to miss out on this once in a lifetime adventure. My skills are certainly there so its not that.  I do have a fear of dying for sure — and heights too, but this trip regularly goes up to 15,000 feet on gravel roads without guard rails, but most of the time, the drop is generally a few thousand feet — hahaha, like that makes a difference.  But it does.  My mind does not look down and see a massive drop, I only see a drop that will kill me but won’t take long —  On the Death Road, the drop is 10,000 feet and that would freak me out.  Its a long and slow death down.

So today was the day.

We took off our panniers (side cases) off from our bikes to lighten the load.  That made my bike into a killing machine — so to 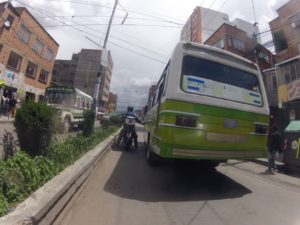 speak.  So much lighter without 50 lbs of tools and other crap and thats without my normal packings which were in the hotel room and add another 50 pounds.  We suited up and everyone was kind of quiet at breakfast this morning.  We departed at 8am.

The ride took us through the city of La Paz, or the city of driving in jello.  It is super congested with ride sharing vans, busses and cars.  Lanes do not exist so its like Jello jumping around to get where you need to get.  In our case, it took almost an hour.  Finally we were on the highway to the Death Road.  When we left La Paz, the weather was sunny although it did rain last night.  Along the ride, it was nice and clear for the first hour. 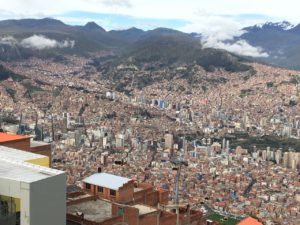 The city of La Paz sits between 10,000 feet and 13,000 feet altitude depending on where you are located.  Its like a valley surrounded by large mountains.  People live all around the hills and in the middle valley — or wherever there is an inch.  Its kind of like Lima, Peru.  It wants to be modern, but it is still a mix of psycho people, lots of indigenous rural people and a few lucky owners of something — or shall I say — dirty money people is my guess.  Not my issue, but it stares you in the face.  This country is real poor with an annual salary of just $6,750 USD per year.

Our ride took us up to just over 15,400 feet and it was just glorious.  The sun shined and the snow capped mountains surrounded us.  Again, remember, its summer time here.  The temperature at 15,000 feet is in the low 40’s.

We kept riding with a hopeful trepidation and happiness to achieve something neat.  But just 20 minutes later the weather 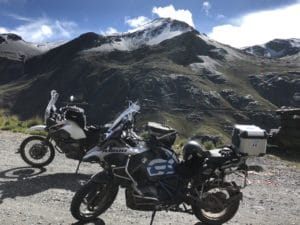 tuned bad — real bad.  The cloud cover was aggressive and very low.  The rain had settled in now and it was ugly.  Our riding slowed and we were all hoping that the other side of the mountain would be much nicer — but it never got nice.

We stopped and made a decision to go to the town of Coroico, the last stop before the Death Road begins just 40km away.  At that point we can go or no-go on the big bad road.  If its sunny, we go.  If its wet, we cant risk our lives.  The wet gravel and the almost zero visibility would kill you first probably and even more so, the view is gone in cloud cover so there would be no point.  So off we went to Coroico. 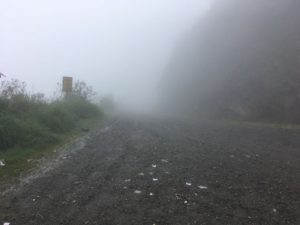 By the time we got to Coroico and climbed the more than 4km of wet and muddy cobblestone road uphill, the weather had stayed ugly.  Decision made, we back off.  I was honestly disappointed.  Once you make such a huge decision, your in and my mind was focused on finishing.  Others were the same but realistic.  Nobody was going to kill themselves just for the story.

So that was it.  What might have been.  Sorry to say that this time it failed to happen.  I will assure you that our future travels have similar roads, similar heights, similar stress with different names but none will have a 10,000 foot drop and that is just fine by me.