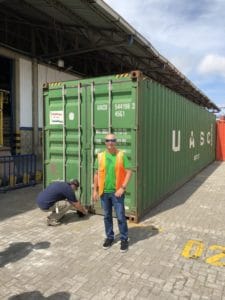 Working backwards, we all finally got back to our hotel in Cartagena with our bunch of freshly released BMW motorcycles.  Its now dark and 8pm.  The day started in the lobby to head out to the harbor at 8am.   Simple math; thats a 12 hour day of of stress, anxiety, apprehension, inactivity and then activity, then waiting, then activity and then nothing but killing hours — and finally, success. 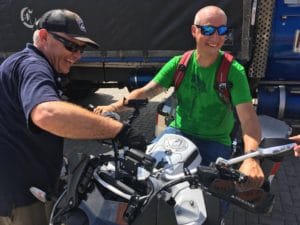 removing and piecing together our bikes, we started fist pumping because we were leaving.  Nope, wrong!  More paperwork.  In fact, 4 more hours of paperwork.  Columbians love papers and stamps and passports and phone calls and they do it non-stop.  I don’t want to pick on these nice people but they spin which  is like going on a roller coaster in a loop.  Up, down, up down…   Hard to imagine how these countries ever move forward — 8 fucking motorcycles and one chase truck clearing customs took almost 4 days of full-on effort and probably included more than 50 people.  Who cares now, we finally left the harbor at 7:00pm. 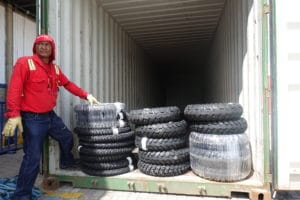 After getting through the harbor gates of hell, all eight bikes lined up and started our our journey through the city of Cartagena at night which means a party-time full of erratic and drunk drivers who think a 2 lane road is really designed for 3 or sometimes 4 cars wide diving irrationally in and out of these imagine lanes.  Interesting to watch — not to participate.  Equal amounts of 125 cc tiny motorcycles buzzing in and out of lanes without 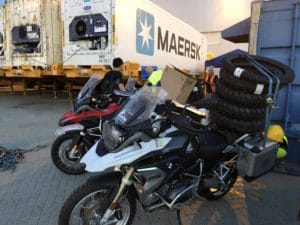 regard to others.  Our two Thai riders say its similar to driving in Bangkok and probably worse.  I don’t care, it was fun.  Our guides were definitely concerned for our safety from locals jacking us since we had stand out hardware —  so we huddled in a pack down as if we were driving Rolls Royce automobiles in Iraq down the crowded roads.

Did I mention that I fell at the side of the road?  Yah, I fell and the only one in our group to do so.  Sucks, and I would say embarrassing for day one but it means nothing and these things happen — unless I do it again. We all stopped at an intersection and the ground was raised about 4 inches.  When re-entering, I messed up, dropped the 700 pound loaded bike.  Lucky for me, I’m hanging out with the land of the giants and they got my bike up in a jiffy and off we went.  Lane splitting in Cartagena has a new meaning — instead of motorcycles splitting, here it means automobiles often getting squeezed and stopping quickly and finding the next hole.  Nobody goes straight.  On our way back, our lead rider hopped on a sidewalk to avoid traffic, so there we were, dodging along a sidewalk with these monster motorcycles which took every ounce of my concentration.  These German and Thai folks I’m traveling with are definitely well experienced guys — I will absolutely be the weakest link.

In the end, we all parked in the underground garage at the Radisson and tomorrow is packing day.  Getting everything ready to haul out — and I will definitely need the full day to get organized.  Its now very real — 70 days of intense and insane fun travel ahead.

I have to add one topic before leaving this post — Poor Jeff.  Jeff Ward from Austin was the only other sole guy who wanted to come with me on my ride from Los Angeles to Panama but we both thought it might be too risky alone.  He is an alpha and I can see has strong emotions.  For example, I first met Jeff a few days ago and he was pissed because he had to go to do this merry-go-round of paperwork bullshit.  I sat and just watched him brew about it because he brought his girlfriend to tour around while we were getting organized.  Everyone else in the group was very mature and understanding — not Jeff.  Look, Jeff could end up being a great guy, but for now, he is low man on the pole and I hope he tries to climb up — for everyones sake.  Anyway, Jeff was actually lucky in one way because his bike was released first and super quick two days ago.  Only one issue, he had to be alone because his bike was in a container alone in the port which meant he had to put his bike together by himself.  Seems that Jeff plugged the positive end of the battery to the negative — or reverse, and poof… blew his circuit board and electronics on his brand new 2018 BMW motorcycle.  He literally smoked his bike.  Net of it is that Jeff’s bike was shipped to Medellin, Columbia to the BMW dealer there — about 4 days away from us arriving.   He will be traveling with the chase truck and I guarantee, Jeff will be miserable, no doubt.  If it is a circuit board, Jeff will be leaving us to go back home quick.

Well, tomorrow I am going to fill you in on my group; Will and Tong from Thailand, Bernt, Bert, Martin, Katrin from Germany, Manfred is from Austria but lives in Germany, Oliver and Marc — our group leads from Germany as well.  That leaves Jeff from Austin and me.  I think the size of our group is perfect — for now.  All very quality people.