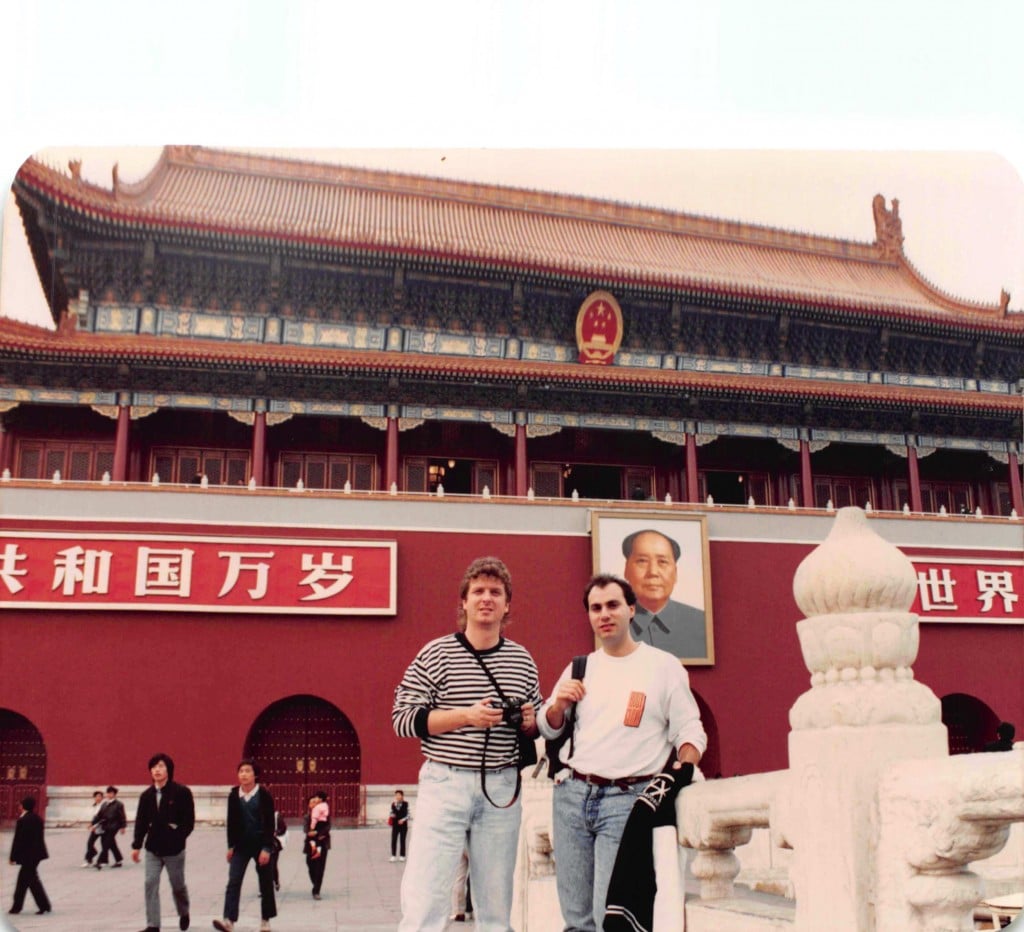 Back in 1990, at the early business career age of 29, our company was already 7 years old, had $14 million in revenue and about 20 employees.  I along with my friend and sole partner, The Po, we first visited China to find our pot of gold — green grass for hungry young business people.  Less than two short years after the famous Tiananmen Square tanks challenged the populous with red 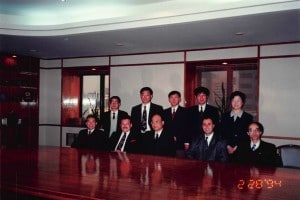 iron muscle.  Canada was wide open for business, while the United States and 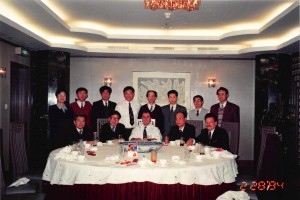 most of the world imposed trade sanctions against China.   Fertile ground for two aggressive young Canadians eager to sell large, multi-million dollar computer systems to the Chinese Government without much competition and with the full support of a very eager Canadian government — let’s say that those years were business-heaven.

The world was different then.  People could not make billions of dollars in a year.  Dot.com was not invented yet.  Social anything meant picking up a phone or setting up a face to face meeting with a real human — no hiding behind a computer.   Tech wealth meant hard work and years of grind with limited shortcuts.  Wish I had benefitted from the one-year rich plan, but I was not that fortunate.  So, Unfortunately (or fortunately) I put in the hard years and got some great experiences with it.

After the initial visit to China, and over the next 10 years or so, I went back dozens of times for business.  We traveled basically everywhere in the huge country — from the frigid northern Harbin and Daqing, near Mongolia to southern Hainan Island, just 100km from Vietnam to the soft-of civilized Hong Kong.

Travel to China was horribly difficult.  Just getting to Beijing from Toronto was often a 24-hour journey since airlines going to China were sparse and limited to Air China and United.   Movies on Air China were poorly dubbed and the stewardesses wore tacky Pierre Cardin outfits.  Amazing to think that way and comprehend how different it was compared with today’s open world travel scene. 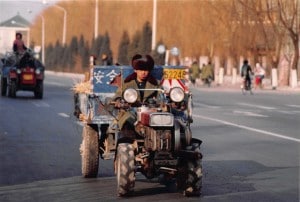 In China’s early years when I was there, often people were not permitted to leave their districts without permits because the government had such control.  Bullet holes were still scattered in Tiananmen’s concrete.  People did not talk about their experiences in the open public areas and in front of others. 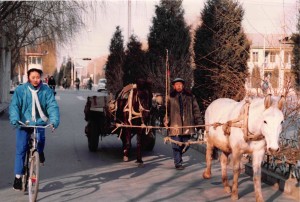 Travel within China and away from Beijing meant even sleeping in rooms without heat or hydro, in frigid temperatures.  No exaggeration, at one hostile/government building, we slept in rooms where it was so cold, the towels were rock hard and no running water in the toilets — all because the town government was having a fight with the local power utility.   We often had to go to the black market to get airplane tickets to travel.  Train travel was in a Russian made locomotive, built in the 1950’s, and meant sharing a filthy cabin with neighbors eating rotten eggs and spitting on the floor next to you – toilet means a hole in the floor exposing the moving track below and bribing the conductor with a new shaver to get the best of the worse seat and some food.

China was in a constant state of change and had great growing pains.  On one hand, huge cranes were constructing volumes of new buildings everywhere and on the other 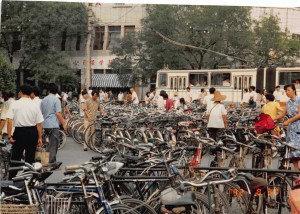 hand, a beautiful huge glass building like China Customs on the inside had no paint, just untaped drywall everywhere — a huge fake facade.  Only painted room was the boardroom for foreign visitors and the leaders.  I wish I took pictures.  I remember first going and everyone wore Mao grey flannel outfits.  Taxi’s all had pictures of Mao hanging from rearview mirrors.  When I first went to Shanghai in 1993, the streets were littered with bicycles and a few cars.  Picture if you can, thousands and thousands of bicycles sharing roads next to farmers driving home-made wooden carts powered by beasts of burden carrying exposed raw meats in the hot summer for delivery to the market in the city.  That was Shanghai.  Upon returning to the same place in 2013, it was like the old Shanghai never existed.  New and modern buildings replaced crumbled slums and thousand-year-old walls.  Cars have replaced my beloved bikes and wooden carts.  All this in 20 short years.  Seemed almost impossible

Those were really incredible experiences that only the Po and I will know.  Today, China is so different and while still follows the 90-10 rule (90% nice, 10% crap — can never be perfect in China).  My biggest regret 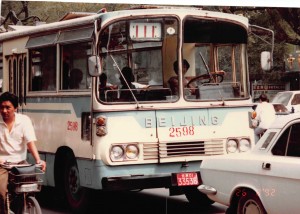 was that I did not document those experiences in a diary, a log, a website (which were not invented yet then).  I took some pictures, but not enough and it’s not organized.  Big regrets, but can’t go backward.

Moving on…  The story above is the impedes for this blog.  I would like to have a travelogue of our experiences.

Maihem Adventures are Phil and Paula’s Travelogue. After working like a maniac for 30 years, its now time to smell the roses and toss away the conventional life which says that you have to work every day and always chase the dollar.  I did that.  For now, I don’t care about more dollars — or at least not to interfere with my travel desires and life experiences in any way.  That could possibly change with circumstances, who knows, but in the meantime, it’s our reality.

This is the journey of two retired young at hearts and still able body folks — with an open schedule and an open mind for new adventures. I want to create some kind of a historical window of our travel lives for family and friends.  Better late than
never.

In 2015, either one of us, or both of us have been away from our home in Florida 2 of every 3 days. Over past few years, we have been to countless trips throughout the U.S — too many to count, went to Bahamas and Keys about 10 times on our boats, Asia twice on separate trips; China, Vietnam, Singapore, Hong Kong, Japan.  Spent time in Europe…  In September 2014, we spent almost a month in Peru traveling the southern Andes mountains as high as 16,000 feet as well as the most humid place on earth —  The Amazon (yes, worse than Florida). In 2014-2015, we spent over 2 months in California over 3 trips, with our last trip for a month living in Malibu on the beach.  I have personally driven the Florida — California leg (albeit the long way round) 3 times in last 2 years in a McLaren, a Porsche Turbo S and a Range Rover — Purely heaven.  Pinch me.  The last trip included crossing into 14 US states, over 6,000 miles and 3 weeks on the road including the highlight — visiting the Jelly Belly factory in Northern California. Love that!

We are not interested in just traveling to Europe or the US, although that is great too — and will continue to do that. We would equally rather explore new parts of the world or choosing paths which are not necessarily the normal goto — but instead, we are thriving active and energetic hiking, trekking, exploring as well as visiting places where tourists are few.

Best of all, we are unencumbered by the nemeses of most people — TIME.  We have no clock or a set timeline for any adventure, no work commitments or meetings to interfere.   Kids are a non-issue by-in-large.  Strange I admit, but it’s what makes our journeys so incredible.  Anything goes.  So lets Go Go Gecko!

I hope you enjoy the discovery tour we are sharing.