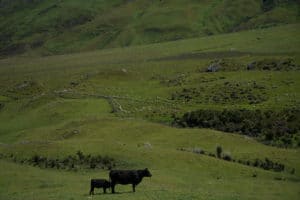 So this is a difficult one.  Which cover image represents our last 2 days?  Hmmm, hard, trust me.  Of course I could have chosen the cute calf suckling its mother in the foreground with hundreds of dots of sheep in the background as you see in the image on the left.  Too easy.  Click on it if you like to enlarge — its amazing. 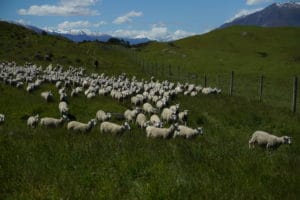 the right.  Again, so prototypical.  Yes, this was just a great experience staying at the Minaret Station.  So what exactly is a station?  Well, when we first got here by way of helicopter — the only way to get to the station — I thought it has to be because it is so remote and off the grid and I mean, literally off the grid.  Only access is via a 4.5 hour hoof on foot to the lower land or via helicopter which come to the station 5 or more times per day.  The Station is a 55,000 acre ranch which is just one of the most beautiful places on earth.  If I could count the amount of times Paula said “beautiful” along our walks or stay here, I would be — well, a good counter. 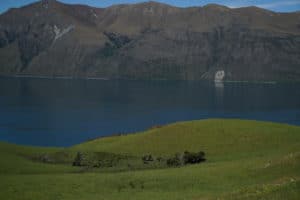 The Minaret Ranch has about 25,000 cattle made up of about 3,000 sheep, 20,000 deer and I cant remember the amount of cows, but enough.  Deer you say?  Why so many deer?  Well, it seems that deer meat — or wild deer meat known as venison is enjoyed by lots of countries of which Germany is the number-one importer.  And I can tell you first hand, I have had deer meat tons of times on this trip and it is spectacular.  Not fatty, lean and taste just like any other meat.

So for the interesting part — in New Zealand, the deer is basically at the top of the 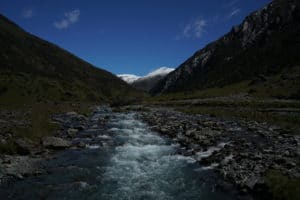 food chain.  Nothing, other than humans stand taller.  Why?  Their are no moose, bears, ox, … No other native animals in New Zealand ever introduced — shocking and still blows my mind.  Seems almost impossible.  In fact, their are no snakes, rarely spiders, or anything that can hurt a human.  Super strange right?  You can put up a tent anywhere — dead center in the middle of a forest and their are no mammals which can hurt a human — or deer.  So here lyes the issue in that since the deer have no natural enemies or predators, they propagate freely and lets just say too much — like rabbits.   Their has historically been way too many deer in this country.  So unlike the US or Canada where deer are more scarce and can only be hunted in season or with a permit limiting the number which can be killed, in New Zealand, killing is free any time and any amount.  You can even kill 100 deer at at time and its not an issue.  Deer are known as a “pest”.  But man, the meat tastes great!

Anyway, we took a helicopter at 3pm for our journey to the station from this cool town called Wawrinka.  Bumpy and windy, oh yah — but fun still.  We cross the mountain range 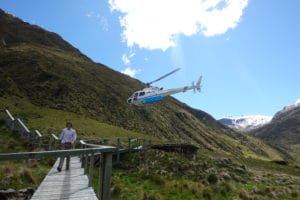 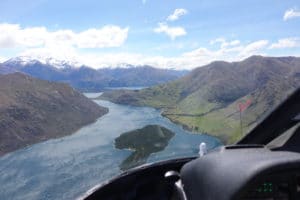 and the copter hangs around 50 ft above the mountain.  Its the only way to the station.

So the real neat part of this experience is that half the property of about 22,000 acres is the active “farm”.  But don’t think about this as a normal farm — its not.  Its mountainous, huge valleys and incredible pastures.  If you have not seen 22,000 acres, then you will surely be shocked on how big that actually is.  Now, the lodge is on the remaining 28,000 acres of the same.  Their are in fact over 385 kilometers of fence on this property — up and down the highest peaks.  The deer are on tops of mountains, sheep second highest and cows are on the low lands.  The lodge is nestled about 5km into the mountains — in between two mountain ranges.  And trust me its remote.  As I said, everything is done via helicopter.

So Paula and I went on a 4.5 hour hike from the lodge to the edge of the large lake which terminates the Station.  It was a pretty 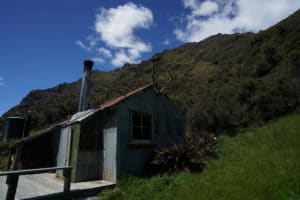 aggressive hike at points which took us through a forest not really marked, but more so, it was just lots of fun and I wish I could tell you how exponentially beautiful this hike was.  Over the top!  Streams upon streams.  Mountains, some snow covered, some not.  Vegetation in most areas, but massive rocks and boulders throughout.  About half way, we hit a deer hut — a place where visiting deer hunters hang out overnight when on the hunt. 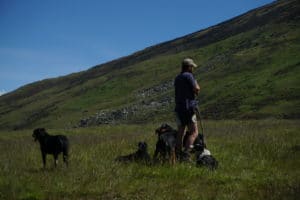 At the end of the hike, we met up with a Toyota Land Cruiser which was there for us to tour the farm.  We ran into a sheep round-up with a real cowboy, Ben.  He is the real deal.  We also saw cows and deer living in their real environment.  When it was time to go back to the lodge, we were picked up by — you guessed it — a helicopter.  Got our ride back and had dinner.

Anyway, I could go on forever.  This was a real expensive place to visit — mainly because of the need for the most expensive transport but I wish I could share my heart-felt desire to explode with happiness.  Great hiking, great scenery, great people working there and in the end, its all about the hike and nature.

Today we took a helicopter from the Station to Queenstown over even greater mountains — took about 25 minutes and was an explosion for the eye and senses.  Mark our pilot was real cool and we chatted the entire journey.