Feature image is of a great road ahead while I navigate on my BMW GS.  Scenery went from worst to best — and a hard day. 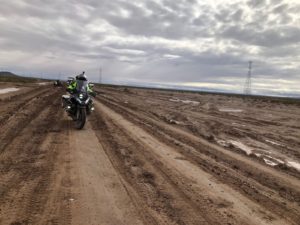 Today was to be a long and hard riding day.  It had been raining constantly since we got to Uyuni and in this part of the world — paved roads do not really exist so its either hard packed dirt, rocks or mud.  I chose anything but mud please.  But the rain was constant for the past 2 days and the real only opening was the day we took pictures at the salt flats — but the flats were flooded with water and it turned sunny after we left for only a few hours.

All this means that the roads on our days journey of almost 450km was going to be tricky.  Marc heard that the route might be 90 percent dirt road and that means at our speed, we might get to Calama in Chile by 10pm so we needed an early start — which we did — at 7am.

The day started by taking us through the dirty and disgusting town of Uyuni.  We got gassed up and left.  Before that, the town 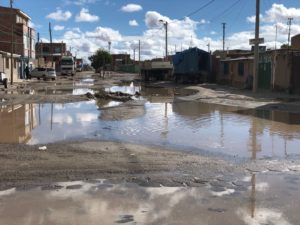 was under water and full of mud which we all realized that this may be the tone of the day and it was.  Now my BMW R1200 Adventure is a heavy pig.  3 of the 6 are riding this type of bike, the others are riding BMW F800’s which is a super tall adventure bike  — and it weights about 75 lbs less which in the riding on mud game is tons of weight savings.  My tires are also 60-40, meaning, 60% road and 40% off-road since I was told the first part of this adventure would be fine and the second half I needed more hard core tires.  Seems that the others did not get the same memo and they all have real nobby and hard core tires to start which grip on mud and gravel better than mine at a 80% off road and 20% road mix.  Net of it, on mud, I might was well be riding on black ice. 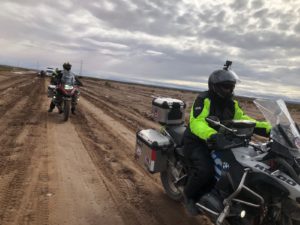 So Uyuni was bad navigating, but nothing compared to what was ahead of us — about 75km of slick mud.  I was using every bit of my ability to keep the bike from dropping.  Marc, our lead dropped his bike and broke the panniers.   I dropped my bike at about 3 mph but I had absolutely no control.  I could have dropped 5 or 6 more times but I was going to be super cautious and not going to lose focus.  I was exhausted for this stage of about 2 or 3 hours.  The pictures do not do the situation justice.  At certain areas it was pools of mud and fear.  I rarely drop these days but in a case like this, its a pain because it means a giant mess and a bummer to get upright and going again because you have no traction to lift the bike.  Moving on…

We got to the Bolivian-Chilean boarder at around 1pm after riding on some real nice hard packed ground.  The scenery was 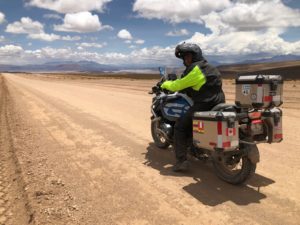 getting better, but the best is yet to come.  Still, the riding area became more and more desert-like and that meant much easier riding on gravel.   Even the sun started to participate in the game and all was looking up.

The boarder was closed until 2:30pm on the Bolivian side — don’t ask why?  Don’t waste your brain cells to understand these people — just accept that the boarder was closed until 2:30.  A lady had a food stall set up at the boarder and she was making a killing with her home made soup, chicken and rice and other local delicacies she had slopped together.  I ate cookies.  My stomach is in a good place these days and I know why — I don’t play the game of lets eat anything that looks ok and safe, because it never is.  Bad game.

Took us about an hour to cross the boarder because the Chileans are pricks and make you unpack every single bag and show them the inside to ensure no fruits or vegetables are come in from Bolivia.  That meant every motorcycle was inspected, the chase truck too.  No other boarder crossing could give a shit about that.

So after passing into Chile we were shocked to see that the roads were paved and pretty nicely done.  Even more so, the scenery was turning from decent to amazing — maybe top 5 best on our entire journey.  Seems that this part of Chile is home to dozens of massive volcanoes — so tall that they are all snow capped.  Our destination took us through an amazing two lane road, virtually no cars traveling on it — and I mean that.  If we saw 20 cars in 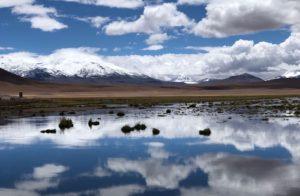 4 hours of riding, than that is a lot.  That means to me — NO SPEED LIMITS!  I was riding often at 100 mph on absolute straight roads into the horizon.  The curves were nicely shaped and not abrupt.  It almost felt like we were in the USA.  Chileans seem to think about how a road should be built for driver safety.

For the next hours, it was like a dream.  Manfred kept pumping his arm in front of me.  I’ve learned like a dog wagging its tail, when Manfred pumps his arms, he is happy.  Huge, if the physically perfect male specimen and head strong Austrian is happy — I’m happy.  The roads were great, at every turn or drop in altitude was another snow capped volcano with sun hitting its peak making for a bring light and generally clouds covering 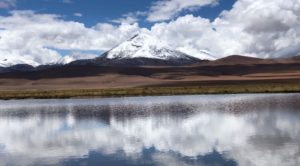