Feature image is of the not so famous Cuesta de Lipan, the 17km Argentinian version of the very famous Stelvio Pass in Switzerland.  I could have taken a hundred pictures, but I had to ride it too.  So sick!

Days to Post this Page:  Its taken me 3 days of overnight downloading to get enough Internet just to download these 2 pictures — So enlarge them, the scene is fantastic.  One thing I need to remember about this trip is the scarcity of Internet and how these people in the backroads of South America are so disconnected from the boundless information of the Internet. 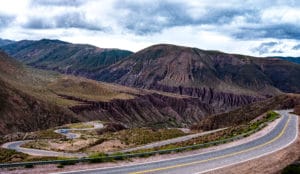 Todays post is really short and sweet.  We rode some amazing highlands today which really crossed through the Andes all day.  Roads mostly cut through passes of super high mountains and our journey ranged from 8,000 feet when we started to as high as an amazing 16,000 feet — mostly around 12,000 feet.  Views and vistas were breathtaking.

Around noon we crossed from Chile into Argentina and that took about an hour or more — just volume of people crossing and the lack of a good system to process vehicles and people — so what else is new?

Highlight of the day — and maybe the week was just outside of Purmamarca at around 4pm, we entered into the best road for sure I have ever traveled.  The strange thing is that nobody knows about this road and its virtually empty — a motorcycles dream road — forget that, a motor heads dream road.

Its called Cuesta de Lipan and it has 27 switchbacks carving into a few mountains and starts at 12,000 feet up and declines over 6,000 feet in those 27 switchbacks.  Now if I’m losing you because you could give a shit about switchbacks and drastic descents — listen to me — this is super rare.  My boys from Europe were pissing in their pants with excitement.  They have all traveled the Stelvio Pass, which is the most famous aggressive switchback in the world, and they say that this is a close second.

Nobody knows about this place.  Put it in Europe and it is world known.  Unfortunately that would clog it with cars and motorcycles which is the magic of this ride — you can virtually go at any speed because no cops and no traffic.  Pinch me.

I took some images — but not enough.  I was in conflict about taking pictures or riding it in all its glory — I chose the ride.  Wish I could go and do a re-do.

In fact, Manfred, the Austrian went back up after getting to the bottom just to get it all in.  Wish I followed him — it was that inanely good and fun.