Feature Image is of a truck carrying sugar cane — barreling down a dusty gravel road through a small Peruvian town we stopped and visited today. 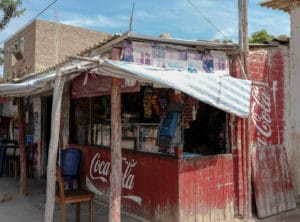 I’ll keep this short and sweet and just bomb you with some images of a small town we visited today for a drink break.  Don’t ask me were we were, but we left Chiclayo — wherever that is — and headed out through the desert but this time, some mountains were added and a whole lot of gravel roads, tons of dirty muddy dust flowing and a litter of crumbled houses and buildings on each side of the road.

Oh, one more neat thing was that we were headed off to Trujillo, Peru.  Who cares where that is, but today was special for that city.  Papa, the Pope came to visit that place — exactly the day we were roaming in on our bikes.  Funny enough, the traffic was actually lame because everyone was downtown watching the man in white.

So back to the small village, we stopped and just walked around, and I took advantage to take some pictures.  Here are some of 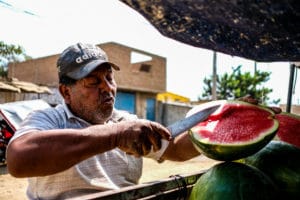 them.  The man with the watermelon drove the half motorcycle, half truck jalopy on the right and clearly has no money but he was nice enough to offer us a piece of refreshing melon. 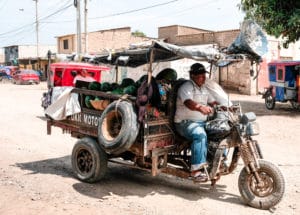 I also think from the front of the watermelon man’s truck, it looks like another Mad Max analogy.  He clearly built the truck from a real old motorcycle parts and some bald tires and a very nice seat.  But the best, yes, the best… He added a front big-ass bull-horn speaker for some reason — which I’m 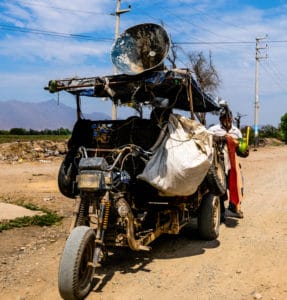 guessing is to let his community know that he is open for business.

I then wandered and took some shots of locals.  Generally I have pretty good luck at gesturing someone requesting that I take their picture.  I would say that my hit rate of getting an approval is over 85%.  If I don’t get approval, I beg in a nice way and that works another 50% of the time for those who turn me down originally.

So here are some the town people…  The old lady in the white hat was so cute because she fixed her hair after I asked to take her picture.  She was very nice and — have to love that hat. 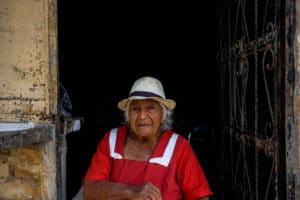 The next man right away agreed to a picture.  He posed happily while I took his shot.  I always find it interesting that he is wearing a New York Yankees hat and I would bet $100 that he has no clue what his hat represents.  Anyway, who cares, 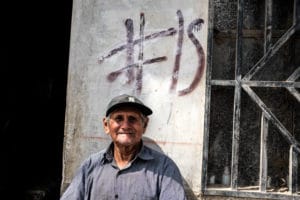 he is a cheerful nice guy.  I also like his backdrop with the concrete wall and the graffiti behind him.

The next lady was not so willing to get her picture taken.  I then begged.  Told her how beautiful she was in English.  Problem is that she did not speak a stick of english.  So I smiled and she still would not look at the camera — so I just took the shot.  She knew and was very friendly. 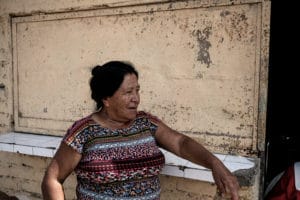 The next image below is of a typical building — in this case it housed a small retail store for tires and oil — with clothes hanging outside.  The road is super dusty and what we ride on.  If you click on the image and enlarge it, then look close, their is a young lady holding her baby in one of the dark doors.  I took a picture of her with her 2 very young kids as a family.  Again, very cute and curious about what we were doing in this town where nobody comes. 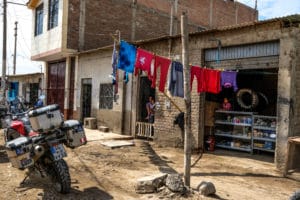 The next image is of a tuk-tuk garage.  As you can see, the motorcycle taxi is on its side.  A bunch of people hanging around the shop while few are actually doing the work.  I love the real life where these motorcycles, tuk tuks, trucks, cars or even bicycles break often at the side of the road.  I guess these vehicles are pieced together and constantly need attention.  Anyway, thats was fun.

After visiting the small town, we rode to another sea side area for lunch and then hauled butt to get to our hotel.  So what is significant about todays ride?   Well, tomorrow is a day off — and I plan to chillax the entire day and enjoy my quiet time. 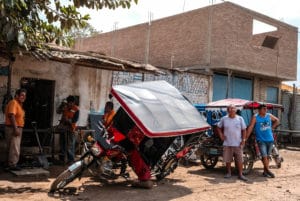 We had our 6pm briefing and it seems like Monday will be a hell of a day.  Lots of travel kilometers to go.  Lots of gravel and broken roads.  Lots of tunnels which were hand carved and the beginning of gaining altitude again — and cold weather.