Feature image is of our luxury 1-star hotel in Banos.  Very rough around the edges and of course — no decent internet.  But, its a bed.  The ironic part is that they gave themselves a 4-star rating — on what rating system, I’m not sure?

Today started off with so much potential — You know where this is going. 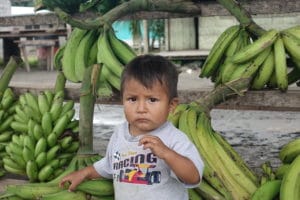 Except for the sounds of a dozen rabid dogs barking at 4am, I had a pretty good sleep.  The shower was rough, cold but did the job.  Seems like nobody in Ecuador pay their heating bill or something.  We all were prompt as usual and ready to depart at 8:30am for a long 380 km ride.

Leaving Banos which was about 6,000 ft and in the low 40’s, we rode the morning down to about 1,000 ft above sea level through the Ecuadorian version of a rainforest — locals call it the jungle or amazon.  I had no clue that Ecuador had such lush greed foliage but I will say that it was raining at a decent clip so the group put on their rain gear — not me — I did not bring so I get wet again.  Mr. GoreTex, please explain your fabric again because I paid extra for GoreTex Pro and I still get whacked and wet.  Anyway, the super green surroundings mixed with rain means a concoction which make tons of bananas, cocoa and other fruits in massive mountains and  lower lands.  The kid in the image to above has no clue what Formula 1 Racing is — they probably make the shirt in Ecuador.

Regardless, it was just one of the best rides of the trip so far.  Although it was raining, the cloud cover was so low and hovering 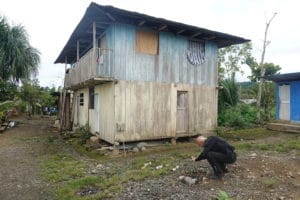 around the larger mountains it was so picturesque — too bad stopping was infrequent.  Honestly, I was on cloud-9 riding through the rainforest — scenery was just so intense, massive and eye-popping dark green.  By mid-day at low altitudes in the valley, the temperature rose to about 85 degrees which felt nice for a change — not to last.

The roads were fine, but were unpredictable.  You never know whats around the corner — maybe a drop in the tarmac by a few feet and boom, my motorcycle shocks hit bottom.  That happened too often.  On occasion, an entire section of the  road was missing out of the blue — You could be coming into a blind turn and there is no road.  That was not so cool.  Other times, your going 70 mph on a 30 mph zone and the road my turn to rubble and you ride through that hopefully without wiping out.  My heart dropped a few times.  But all in all, just a beautiful ride because it is just so fucking scenic with mountains and hills and flowers and just no visitors around us — just real life going on. 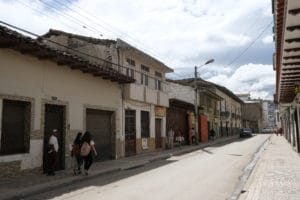 We stopped for lunch at around 1pm and a half hour later the second leg had even more surprises.  At one point, I had the typical shit-in-the-pants feeling.  We were riding and noticed that big time construction had taken out the road — a good quarter mile of the road was gone and just a pile of wet mud elevated about 10 feet and no real path filled with tire ruts everywhere.  We all stopped and I would have been happy to turn back to Banos.  At first, a car coming from the opposite direction came our way and it had 4 wheels and it was sliding horizontal and trying to grab traction and I’m watching this go down and I’m thinking — no fucking way!  We have 2 wheels.  Can we go back to Banos please?  Nope, after the oncoming car passed us, Marc drove the slippery mud track leading into heavy gravel and finally on the road again which took him about 2 minutes.  I stared in disbelief that I had to do the same as Marc.  Next to take on the long mound of uneven and rutted mud was Bert and he made it — barely.  Then someone else did it.  I 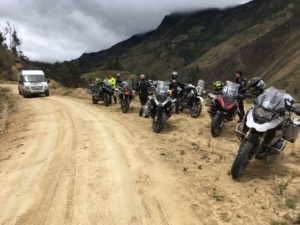 watched them slide all over the place plant their feet and hold the bikes up while listening to their engines scream —  and then it was my turn.  Shit, I somehow got the nerve and adrenalin hit, sweat pouring and went for it.  Some how, some way I muddled and balanced myself, used my feet and all my muscles lots from dropping — enough to get through the quarter mile of hell.  Marc came over and gave me a high five.  Good, I am having a great day.  I am an official BMW rider.  I should not have been so cocky.

We then took off for the last 100 km of the day and Marc pull off to the off-road track.  It had been raining and the ruts from older trucks and lots of muddy holes with water.  I am never overly comfortable with off-road riding after a rain and today is no exception.  I followed a couple of guys but my bike is real heavy and I barreled directly through some mud baths and let me tell you they were slippery.  My heart was through my mouth and I was sweating like I was in the shower.  Just washing through the mud pool and stone is never a great combo, added to that is my lack of traction and what do you get?  Slide, Drop!… and Fuck!  I dropped my bike again.  Oliver and Martin came over to lift my bike.  He took off about 50 lbs of luggage from my bike, put it in the safety van to lighten my ride forward.  I hate dropping my beast.  Of course nobody else dropped but this time, everyone was close at one time or another to slide out — made me feel just a bit better.

I gathered myself and my super muddy clothes and kept a positive attitude.  We barreled the last 50km through the road and towns along the way to our hotel in Cuenca, which we finally got to at 7pm in the dark wet heavy rain.  Should have been a perfect day but eh, everyday is more leaning in just spectacular surroundings and everything else is just noise. Time to sleep in this four walls with a bed room.