Feature Image is of the first minute after leaving my garage at early dusk — It seemed like a Kodak moment, a picture of my bike, a bright yellow light and my home in the backdrop — to start this new adventure which will take me from Boca Raton to Toronto — Flight for me, Paula and my bike to London, UK. — from London to Russian border in Tallinn, Estonia (through France, Belgium, Germany, Poland, Lithuania, Latvia — maybe some other countries) — from Russia to China (through Turkistan, Turkmenistan) — from China to Laos to Thailand.  Thats about it. 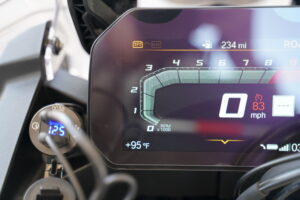 The stench is building up on my jacket and pants.  What a crazy statement to start a new post outlining a new adventure — not just any adventure, a massive one — even by my standards.  But anyway, the statement is accurate, this ride in the past couple of days has been fucking hot — like regularly between 90 and 100 degrees according to the LCD screen on my motorcycle — and let me add humid too — thick like a sauna.  Hours and hours non stop extreme heat.  My clothes at the end of the day are drenched in sweat.

This ride started yesterday morning at 6:30am at dusk and without much drama, I took my bike out of the garage, drove down my normal route to get to I-95 and started riding north.  The fact of the matter is that I will be riding my new bike for a real long time, for a real long distance — I guess about 30,000 km (20,000 miles).  So far 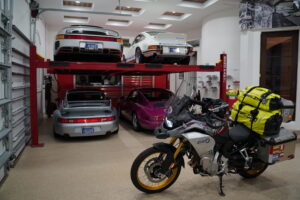 — so good, but not without some confusion, problems, issues and deep thoughts about things I still need to get completed along the way.

Even though I just finished a 7,500 mile ride just a couple months back crossing America — up and down and sideways, that was on a different motorcycle — my faithful 2018 R1200GS Adventure the same bike I rode on my South American adventure a couple years back.  What I learned on the South American trip was that the R1200 is a pig — comfy, strong, confident and reliable — but a heavy pig.  When riding on mud, sand, dirt, gravel or any obstacle, I am just not a competent enough rider to manage the beast which comes in at a svelte 600 lbs when loaded – Oprah when not photoshopped.  I decided at that time that if I were ever to go on another hard off-road adventure, I would get a lighter bike — enter my new F850GS Adventure, the baby 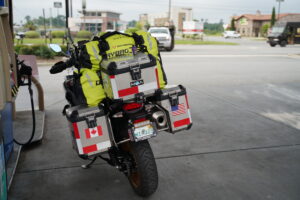 brother.  Not as strong or tight, but a solid choice saving about 50 pounds.  Doesn’t sound like much weigh savings?  It’s a lot when riding into crap.  So that’s it — New bike.

I’ll save you the boring details, but the new bike has its issues and I’m still learning about the shortcomings.  All in all, its fine and on balance it was the right decision — but I am giving up a lot too.  Its like moving from a large solid Range Rover to a less sure footed and certainly not as comfortable Jeep.  I’m not picking on jeeps, but I think you get the idea.  The engine is smaller, louder and rougher — the suspension is a bit soft and shockingly scary at times on the road so far — but off-road is where this new bike bites and shines, which is ultimately where I need the safety.

Anyway, yesterday I rode for way too long by myself — like almost 9 hours.  In car equivalent hours, thats like 24 hours of focus driving time.  I should say that when riding a bike with a group, its pretty normal to ride for 8 hours each day, but you 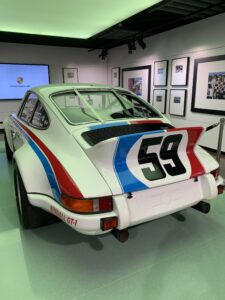 have stopping time, relationships, laughs, communications and comradely which recharges your brains battery.  When alone, its all about a extended focus, dehydration and a bit of loneliness and lots of thinking which sucks the heck out of me so I should really only ride for 5 hours a day.  I ended up in Tiften, Georgia.

Today I started at about 9am to give myself some time to chill before starting although I was up at 4:30am.  Along the ride, I decided that I wanted to stop at the Porsche Experience Center in Atlanta.  It gave me a sense of oncoming fun and an adrenalin hit which helped my frequent blackouts while riding — I get so comfy and relaxed, feel the vibrations and it really puts me to sleep while riding — yes, its true, it happens often sad to say.  I have to seriously fight off the demons that wants to put me to sleep with 5-Hour Energy drinks, Red Bull cans of caffeine and coffee.  Whatever, the idea came upon me while about 2 hours outside of Atlanta so the plan was in motion.

I pulled off the I-75’s Porsche Drive exit and continued just 1 mile from the large highway which houses the Experience Center  —   along with the head office for Porsche of North America.  The impressive modern structure also 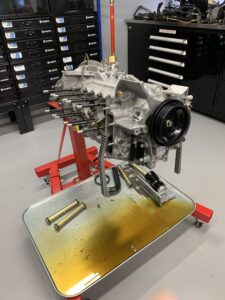 houses the Porsche Classic Restoration Service (restores old 911’s for anyone with a deep pocket) and also houses a small Porsche museum.  I’ve been there twice before.  First time, a couple years back was on a track experience day, learning along side a professional driver next to me in a current model 911 Porsche.  The second time was at a weekend event held for an auction full of classic Porsches — which Paula and I attended.

Anyway, I got to the facilities gate — the guard would not let me in without an appointment.  I told him that I was just going to the restoration center — no luck.  Forget about telling him that I just wanted to mess around the massive, modern and fun building.  I know someone who works at the Classic Restoration Center so I said that I would call him.  Lucky enough after 20 minutes of trying to track him down — I got him to call the guard house and let me in.  I spent about 2 hours there and its like a kid in a candy store — or in my case, an adult in a candy store.

Let me show you one little picture into the restoration process without putting you to sleep — all you car haters.  The images here are first of an engine block (left) for an old Porsche which has been cleaned, repainted, rebuilt with 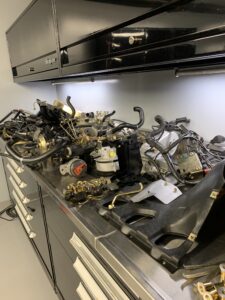 fresh nuts, bolts, springs, valves, etc.  Just a beautiful piece of engine mechanical jewelry — not a computer thing — a mechanical thing.  I asked my buddy about the counter next to the engine if they were spare parts scattered in a seemingly messy pile with tons of components?  He said no — its all the pieces that have been restored, cleaned and repaired as new — to be installed in this same car.  Wow, take a look at how many parts have been touched to rebuild this masterpiece of moving art.

From Porsche, it was now on to Chattanooga, Tennessee — my stop for the night.  Checking in, showering off the mounds of sweat accumulated — I felt so much better.  Its now time to get organized, have a bite and sleep.

Oh, don’t worry, when I get to Toronto, I will clean my jacket and pants.