Feature image is taken of a bench supporting concrete wall with Nazca figure of Vulture carved out, in Nazca, Peru. 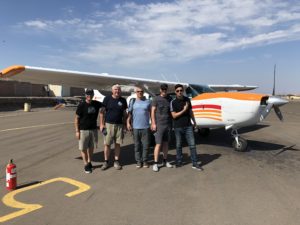 Not sure if I’m going to yak or not?  Just got off a small Cessna plane with Will, Bernt, Manfred and Oliver — first three very veteran pilots, one pilot in training — and me.  The ride was to showcase the Nazca lines and figures from the air.  The idea is fun, we left at 8am today, our rest day and took a bus to the local tiny airport.   We all squeeze into the little Cessna 207, 6 passenger tin plane and it got real interesting when we had a “tail strike”.  What is a tail strike you may ask?  Its when the plane has so much weight on the rear, the back of the plane — the tail — keeled back and we were sitting facing up with the tail on the ground.  The guys had a good laugh but I was not sure about that.  The groundkeeper lifted the plane right-side up again and apparently no FAA to review the damage.  Anyway, the ride was about a half hour of real steep turns, altitude gains and drops.  Will slept, Bernt took pictures and Manfred wanted to take the captain 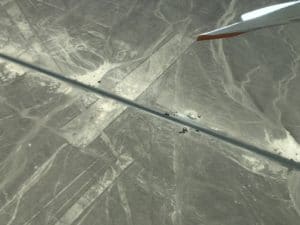 position.  I was located in the very back — and I was getting a bit nauseous.  Not crazy bad but another half hour and that plastic bag everyone was joking about would have been full.

The area with the Nazca lines and figures is pretty large and the figures are fairly spread out.  Often it takes some time to focus on the image and then you realize it seems like the picture.  Close up earlier yesterday we got to see them and its really unimpressive in that the sand is carved out maybe an inch or two only.  It 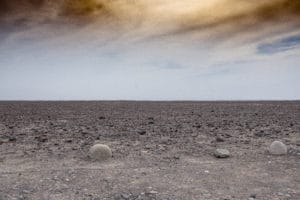 also seems like when a wind storm hits, it would wipe out the image and thus, someone has to be managing the figures in the sand and keeping them alive.  How that could happen for hundreds of years is anyones guess.

The last few days have been pretty easy riding.  Nothing to write home about or even a post.  Yesterday we left the garbage town of Chincha Alta which really is a few hours outside of Lima and a place nobody will ever visit, nor would I recommend on TripAdvisor.  It’s literally a town full of trash. 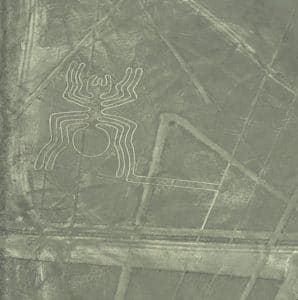 Funny enough, it had a “Mega Mall” so we popped in and even funnier, it had a Scotia Bank branch there, which is a Canadian bank headquartered in Toronto.  The reality of the mall is that it was a dump.  I saw a kiosk for frozen yogurt which certainly caught my attention so I went over to see the details.  There I saw a girl churning the yogurt mix by hand in a very large dirty bucket in the 85 degree heat.  I stared, thought about it — left.  But I had to come back 10 minutes later and yep, the girl was still churning the milk mixture in the heat of the day.  Not exactly what the frozen yogurt machine does?  Anyway, nah, its not worth it.  Apparently the term Mega Mall in Peruvian means a bunch of local stores with appliances and inventory from 1990.  I needed a $5 connecter for my GoPro and asked the girl if they have GoPro parts — she gave me a blank stare, GoPro?  Forget it.

In the morning, we rode through the typical local towns, mostly flats of sand, some agriculture, but not much since we were in the desert region.  In the background were mountain ranges, but that seemed to be a hundred miles away.  After a while, the 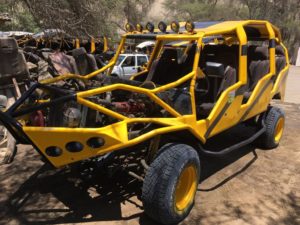 towns kind of look the same — super poor, super dirty living in absolutely horrid always broken down buildings or huts of straw or metal and people walking around in erratic directions — both on foot, in cars, on tiny motorcycles and in tuk-tuk motorcycle taxi’s.  That pretty well sums it up.  The agriculture was dry and if the owner was working it — it was not going to be easy.  Mostly looked like weeds in fields. 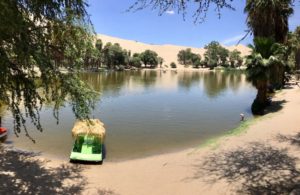 At lunch we got to a town which the name escapes me which was the Oasis in the desert.  It kind of was that.  We were really in the sand desert and there was a small lake in the middle.  They made it into a small town with buggy rides in the sand dunes and a walk around a real dirty lake and park-ish area.  We had lunch and moved on an hour later.

The rest of the ride was the usual dodging traffic mostly in the desert.  We finally hit a small mountain range and that changed things up where we gained some decent altitude in the range and had some twisties and curves carved in the mountain.  About 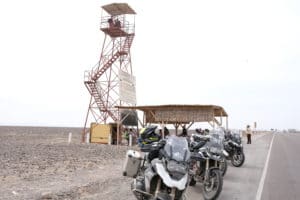 15km outside the town of Nazca was a tower really out of nowhere which was the viewpoint for 2 of the famous figures; the tree and the hand.  To be honest, I had to use a cheat sheet to figure out the design, but after looking, yah, it kind of looks like that.

Then off to the one street town of Nazca.  That’s not really fair, it has more than one street, but you need a 4×4 to traverse the rubble.  The main street is about a half mile of local shops and there are a hand full of foreign tourists.  We did meet a group of bike riders from San Paulo, Brazil who were staying at our hotel.  They were mostly riding BMW’s as well.  It seems 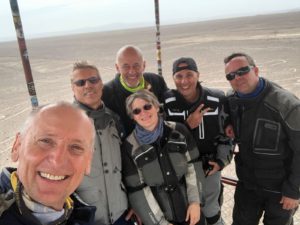 So back to the age old question; are the Nazca lines and figures bullshit?  My vote is yes, its bullshit.  Do some reading about this and next time we meet, we can debate.  I dont really care, its just a place to see and if real, then its super cool.  If hogwash, then the inventor did a crap job of trying to fool us but I for one am a non-believer. 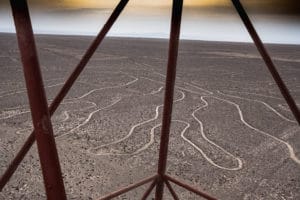