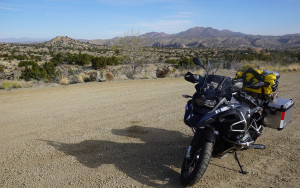 So traveling by motorcycle is pretty liberating — sure we all know that.  It also has some drawbacks, although few.  Where am I going with this?  Well, the past few days have been pretty cold.  The afternoons in the past few days are in the low 60’s, mornings in high-30’s to mid-40’s.  Sad to say that I’ve even seen high 20’s to start in the morning and that is insane.  Try riding at 65-75 miles per hour in that cold weather and I will assure you — one might get unmotivated for a long trip even though I dress for success.

With that preamble, I looked into the weather at the Grand Canyon — south entrance in northern Arizona — the best location — and it was supposed to be around 18 degrees Fahrenheit in the next couple of mornings.  Lets just say politely, its was going to be fucking cold!  Time to bail and revisit my plans.  After talking to my Jedi Master, Paula, who said that she would go with me on a future date to the canyon.  That to me is great — more than enough to bail at this time and revisit later.  I hate to say that I also had to bail on my dream day and night trip to Alamogordo, New Mexico, The Pistachio Tree Ranch, home of the largest man-made pistachio monument in the world.  I was dying to see it.  Rats!  Too cold.  Rats! 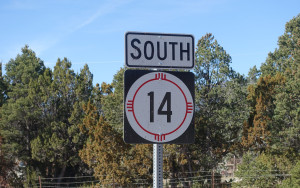 So at 8am I decided to go directly and take the ride to Flagstaff, Arizona and sleep 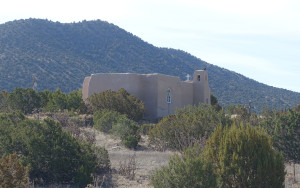 there — then go the next day to Phoenix.  So on I went on my run for the day.  I had talked with the check-in girl at my hotel and she mentioned that she went on a 6 month motorcycle trip to India a couple years back.  Amazing conversation.  She told me to take I-14 down to I-40 for a beautifully scenic ride.  In fact, its passes Madrid, New Mexico, the location for the movie Wild Hogs, that classic mid-aged biker movie, among a few other cool towns and adds about 90 minutes to my ride to Flagstaff.  Ok, done, I’m in.  if your into it, click on the adobe church just above on the right — its just beautiful and in the middle of nowhere.  Looks like it’s built into the environment and unless you look hard, you would miss it.  Just beautifully New Mexico. 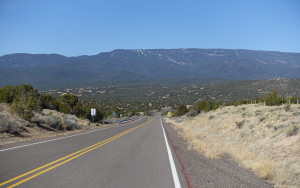 Little did I know that the ride was kind of epic.  Not only was the ride curvy and the 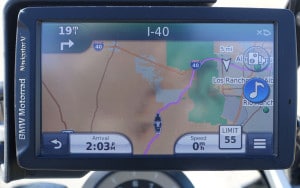 scenery beautiful, the route was virtually empty of any souls.  Almost no cars or pickups anywhere.  I guess we are in off-season in Santa Fe.  Well thats good and bad.  Why you ask?  Well, one of the things I like to do on my rides is pull to the side if I see a nice scene, pull out my camera and take pictures.  After all, this is a ride to remember and I love my camera.  So I pull to the shoulder, turn off the engine and put the kick stand down.  Well…. I happened to see a great shot, so I pulled over… and crap, I didn’t notice that the shoulder was steeply sloped downward.  One… two… and three, bike down on its side and I was helpless.  I got off the bike and thought that its not a choice, I have to lift the bike, right?  I try once, nope.  I try again because after all, I had watched youtube videos on how to lift my 700 pound BMW 1200 GS bike.  Nope.  Then the luckiest thing happened in this barren area of the world, a pickup truck came and pulled over within 10 minutes.  Out comes this large guy and further a nice guy.  Before I could blink, the guy lifted the bike.  Nuts, he did it so easy.  What?  I tried to help but it was a lame attempt.  Seriously, he knows and I know that he did all the work.  I admit it, I’m a bit of a sissy.  Anyway, I mounted while he held the bike and I was on my way — another lesson learned.  I added the image of the navigation above to show that for 100 miles, on I-14 their were very few towns and mostly solitary road.  Someone was watching over me. 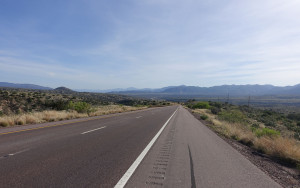 Of course I then hopped onto Historic Route 66 for another iconic ride.  It feels great to ride the tarmac of that awesome old road — that meant so much to the

U.S and me.  One of the first major highways anywhere in the world, period.  The Los Angeles to Chicago run was huge in the day.  Also, my Porsche bro, James Dean did a number on himself on that road in California.

Anyway, I sadly got onto I-40, the lame 75mph highway to Flagstaff and on my way.  About an hour outside of Flagstaff at around 4pm, I decided to go for the gusto and just skip Flagstaff and go for the warm weather in Phoenix.  I looked on my weather app and saw that Phoenix as 85 degrees.  I am weather whore.  I hate cold.  So sure, its another 3 hours there, but I had tons of energy after buying a 5-hour energy drink —  Lets do it! 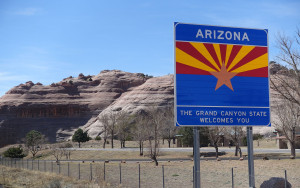 Best ride ever!  Instead of the major highways, the navigation took me through the B
and C highways to Phoenix.  O-my-G, it was so nice, so nice.  Curves, quiet, scenic, lots of hills, warmer and long.  In fact, I didn’t want it to end.   So sad, it had to end, but really, its why I did this trip.  No rules and open highways and a bit dangerous.  Just thinking about it again makes me happy.  What’s also incredible, the solitary ride did not really hit traffic until possibly 20 minutes outside of Phoenix.  Sadly, it was over, I hit Phoenix 3 hours later.

Now to pick a hotel.  While in Phoenix, I parked my bike at the side of a road, brought out my trusty hotel 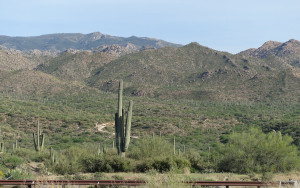 app and chose a winner.  Thirty minutes later and after almost 10 hours of riding I was whacked.

Extra bonus round:  I also had to include an image of the first cactus I saw on my ride to Phoenix.  Just like I still get kick on the first palm tree when driving down from Toronto to Florida.  Here is my favorite cactus in Arizona — the first.

Long day but one of the best of my trip yet.