Memphis, Tennessee is certainly the home of Rock ‘n Roll — No dispute.  That is my next journey and gosh, it was a full day of music experiences. 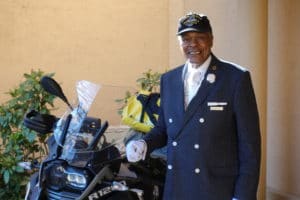 But before leaving Nashville, I had a fun interaction with Robert Johnson, my interesting bell man who took my bags downstairs.  Robert was huge and fragile — in fact, I loaded the bags on the bag cart because I thought he would fall over on me.  After some chit-chat, I learned that Robert was in both Korea and Vietnam wars.  He told me that he had taken-in Agent Orange, the deadly and famed chemical of Vietnam.  I thought that if so, he would have been dead 20 years ago — but I let it go for the high entertainment factor.  We dropped my bags by my motorcycle and before I could twitch, Robert came back with his Vietnam hat on.  I asked to take his picture.   What a character and memory from Nashville.

I blew out of Nashville this morning around 9:30am and on a mission to get to Memphis in the allotted 3.5 hour ride.  That would put me into Memphis at around 1 pm or so.  Great ride — wind was down and the sky was so blue the entire trip, with not even a single cloud on the ride.  I also was rushing out to see amazingly iconic  music tours at the Gibson Guitar factory and SUN Studios.  Both gargantuan opportunities that one can only go if your unlucky enough to go to Memphis.  Sorry, the town is a not-so-great place, but its a stroll though, to an ends for me.

First, I checked into my crazy hotel.  Normally along this trip, I’m good to stay at 3 star hotels; the normal Hampton Inn, Holiday Inn, Garden Inn, Drury Inn…  But last night I found online a single 4 star hotel in Memphis and it was the BASS Pro Shops owned Big Cypress Lodge and it caught my attention.  A bit of an interesting name for what it is…  A tacky hotel along the dirty waterfront of Memphis.  Basically, Bass bought out the white elephant sports arena shaped like a 10 story pyramid, known in its day as “The Memphis Pyramid”, used by the Memphis 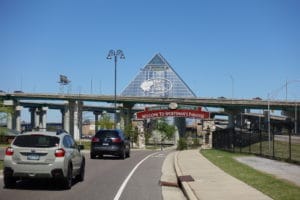 Grizzlies basketball club until 2004.  After which, they had moved to the FedEx Center down the street and this pyramid has sat dead and empty for 10 years collecting dust — that is until Bass Pro Shops came along with a BIG idea.  How about gutting the entire inside and putting in a massive Bass Pro Outlet store on the ground floor?  Similar to Luxor in Vegas, the upper 3 floors in the 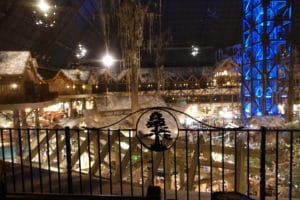 pyramid are hotel rooms around the perimeter.  And to boot, the theme is a make-belief lodge.  Every room has a balcony overlooking the store and all of its bright and shiny lights.  So after an hour or so, the novelty wears off.  The rooms are clean enough so eh, its fine. 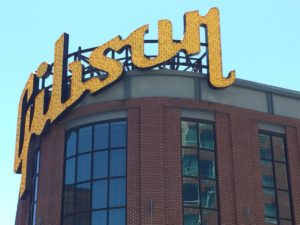 After arriving at the hotel, I quickly split to my first tour at Gibson Guitar.  Let me say that this was an incredible insight into the lost craft of hand made woodworking craftsmanship.   I don’t really know the entire history of the Gibson, but it, along with Fender are the lion share of the guitar world and they are owned by 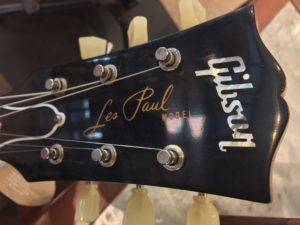 the same folks.   Apparently, the Les Paul guitar is the thing that started it all…  And they still make them.  Basically, every famous guitarist has a Gibson in their collection — either recorded with or played in concert.  Hanging on the wall of fame is Dave Grohl’s Blue Diamond bla bla bla.  Nice.

The facility is much, much larger than you think.  Like, its real big 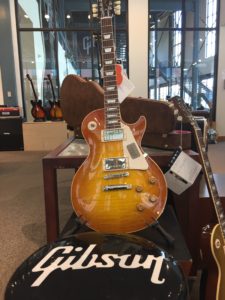 while I was expecting a much smaller plant.   Gibson owns 3 of these factories; Nashville, Memphis and Bozeman, MT — each making different models and parts.  The output for the large Memphis facility is between 58-65 guitars each day.  I’ll try to explain why such a low production later.

First point on the tour is that no cameras are allowed.  What?  Yup, no cameras and that sucks because the tour was great.  Each and every guitar takes 7 weeks to complete because they seriously are made by hand  each step of the way and virtually 100 percent of the materials of the structure are hard woods and glue.  Nothing is made by a machine.  That is mind blowing for me and while on this tour, I kept thinking how amazing that notion of a hand made anything still exists.  Even the painting of the guitar is by hand, by an artist — no robotics here.  And it takes a tremendous amount of tasks and time at each station to complete the guitar.  If you’ve never held one of these puppies, well they are solid and heavy pieces of music making machinery.   I would pay the $5,000 just to have this custom piece of art on my shelf.  I left the factory tour shocked and happy.  I now have a real respect for Gibson guitars — the tour accomplished its job. 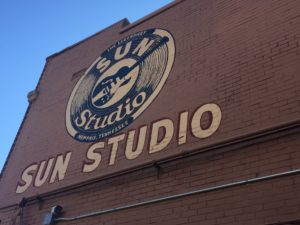 From there I walked about a half hour to my next stop — the Super iconic and historic SUN Studios.  That’s the place where Rock ‘n Roll was born by its genius steward, Sam Philips.  So my walk did come with a bit of fear because downtown Memphis is a ghost town.  I was not sure if I was walking in a safe place — but I figured that I was ok — still scared, but on a mission. 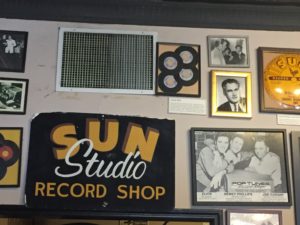 discovered such important talents as Elvis Presley, Johnny Cash, Carl Perkins, Jerry Lee Lewis and more.  Others who played at the SUN Studio were Roy Orbison, BB King, Little Richard and the artists of the time.  Most people reading this do not have a clue who these folks are, but let me tell you that they represented the birth of Rock.  In those days, it was meshed along with the Blues and Country.  Just amazing.  Sam Philips was the visionary — almost unequalled because he was not in NYC or LA and he was not a big executive at a big label, or he was not bankrolling with big money — no he was in poor and uneducated Memphis and more so, he got his talent transformed into worldwide names.  Now show me an equal to that feat. 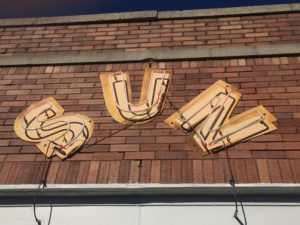 By 1968 the studio and its label had closed down.  In the 1980’s someone bought the old building and turned it into back into a historic site — which it is.  They brought it back to the old studio atmosphere —  along with the equipment and lots of props from the old studio days.  This all equates to a real emotional 40 minute tour.  I’m not saying that I care about Elvis or others, but when you go there, first thing you notice is that each day starting in March until September, probably 1,000 or more people visit this small storefront and studio.  The place is packed all the time and I had to wait one and half hours for my tour time so I saw hundreds of people pass by.  More interesting is the amount of merchandise sold — what a business.  The studio is real old looking — exactly as it did in 1960, but it is still an active studio for locals or even celebrities posing.  In 1986, U2 recorded 2 songs there for its Rattle and Hum album.

Back to the tour, it was super interesting and really brings you back to the day — a simpler time, that represents the era before I was even born, but still, I appreciate it a ton.  So cool.

Back to the hotel at 7 pm and pretty beat up tired.  Tomorrow, OKC.