Well, we finally arrived in Rio at noon.  A bit more gritty than I had imagined, but lets lay off the judgement for now since we have arrived on no sleep and  at 5pm we crashed in bed for a few hours so we could rest to get out in Rio at night a bit fresher.  We did get out for a few hours today to get some urban flavor by hoofing it from our hotel in Copacabana — the famous beach — to Ipanema, a local district with shopping and character.

I will say that the first thing that hits you when going from the airport to the hotel is the vast amount of Favela’s.  Look it up.  Its without a doubt the biggest slum area that I have ever seen in my life.  Its hard to ignore, well, impossible to ignore.  Along the drive, it goes on for a very long time.  Our guide tried to excuse it and was embarrassed to talk about it — but you just can’t miss it.  It’s everywhere.  I had a million questions.

I’m told that metropolitan Rio is just over 6 million people.  In Rio, I see no middle class so far.  Its pretty gloomy except for the landscape.  Its just a spectacular landscape — ocean surrounding for miles,  huge beaches — and I mean huge, green areas and small mountains surround the city.  Its whats inside the city that is a bit more…  Lets just say harsh.  That is unless you like metal bars surrounding any building that remotely looks nice.  Also seems like their has been no new construction here since 1970, however that said, they are doing some infrastructure changes for the Olympics this summer.

Again, lets not confuse the city scape with the surrounding beauty of the city.  Tomorrow were off to the notable tourist traps.

Nightime in Rio on a Friday is a different world.  As I said, our hotel is in Copacabana Beach which is a busy area for tourists and locals alike.  It’s a mix of locals in public bars and home-made street bars which are described as a bunch of bridge tablets, small bbq’s, plastic cups with lots of local booze.  These street bars are like those in Vietnam or the poor areas of Peru – meant for those who can’t afford much more  all this next to the Main Street along the ocean.  Other outdoor restaurants are on the beach or on the hotel side, across the beach.  Food is Amazing!  And even better, super inexpensive for great seafood and meats.  Nothing is fancy.  In fact, I don’t see fancy anything.  If I were in my early 20’s, this would be heaven.  Tons of people just living life – without the excesses most people enjoy.  Now not to be confused with a Barcelona kind of living which I think is much, much, much more modern and comfortable.  Rio is stripped to the basics. 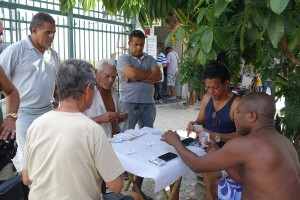 I did get out to take some pictures during the day.  I  Saw these guys playing cards in the park.  I loved the onlookers.  They were so much into the game.  Looks like the game has gone on for at least a year. 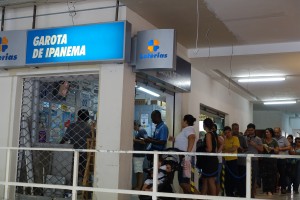 Today seems to be lottery day.  We passed at least 3 locations with line-ups.  Hey, if I was staying in Brazil longer, I would have bought.

Anyway, hope to beat up this jet-lag and move on to bigger and better things in coming weeks, starting with tomorrow.  Oh, I did see something that blew my mind… 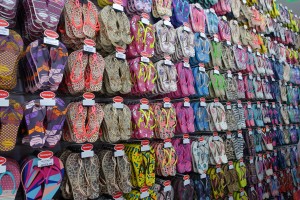 If you were ever curious if Brazilians really wear Havaianas?  My investigative reporting says… Yes!  I just can’t believe first of all, the amount of stores that carry these flip-flops.  And the selection is enormous.  The picture on the left does not do this specific store justice.  Their must have been 5,000 pair of flip-flops hanging in a pretty large store.  Prices range from a low of $6 per pair all the way up to $10 per pair in USD.

The people of Rio really do wear these things everywhere.   I need to meet the owner of this company.  Its like the restaurant that only sells french fries.  One product and only one product.  The dream of any business.  Well, Havaianas are the real deal.

One last funny thing.  You’ll notice the picture of the sand castle on the header.  I took the picture walking the beach.  It seems 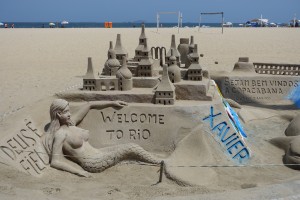 that some dirty and slimy entrepreneur creeped up to me after taking my shot and told me  that I owe him money for the pictures.   Like, am I an idiot?  Falling for the oldest and stupidest trick in the book?  I guess so.  Problem is, that their are so many poor people here, giving hand outs would get old fast.  So I did what anyone who has ever given to Mickey, Mini, Tron or some topless chick 0r any character in New York City’s Time Square after taking their picture…  Well, maybe not; I told the guy to Fuck Off! and I walked away.  I’m a prick.