Feature image is of a Manfred eating me on the Bolivian Salt Flats — Now lake because its rainy season.

Yesterday was a long day riding from the Capital of Bolivia, Sucre which really makes no sense since it is not much of a town —  to our final destination which is a salt hotel on the fringe of the Bolivian Salt Flats.  The flats are about 200km x 100km of salt ground.  Probably most famous for the pictures you can take in various perspectives because there really is no end in sight to land.

The ride was pretty uneventful.  It took us up and down mountains and generally it was a beautiful ride.  Some dirty places and towns but thats Bolivia.  One step up from Peru, maybe equal to Columbia and all in all — beauty is what you make of it.  The highlands and mountains are breathtaking.  Yesterday 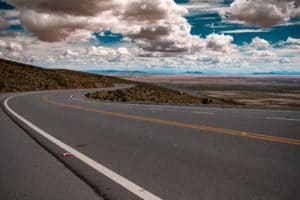 took us through lots of grazing lands for Alpacas, South American lamas.  I caught some images of the alpacas and that was fun.  They are rare and not really used to humans watching them.  We rode with some spirit on some winding roads through the mountains and that is getting more fun and my skills are certainly sharpening.  I can pretty much keep up with everyone — except Will.

During the later parts of the ride, the weather was threatening and in fact did rain for a bit.  Means we have to stop and put on rain gear — a super pain in the ass — taking off is worse.  But it did get sunny again so we did take off the gear.  We stopped for lunch at a real remote truck stop — well, not really a truck stop — more like a shack where local truckers eat at one of the 8 tables in middle of nowhere and I mean nowhere.  No gas stations or towns within 100 miles of this place in mountainous Bolivia at around 12,000 feet.  I’ve learned the hard way not to trust remote restaurants food — and I didn’t.  Especially since I can see dirty clothes hanging on a string around the corner of the kitchen and mounds of garbage within an eye shot.  I was the only one not to eat but thats just fine by me. 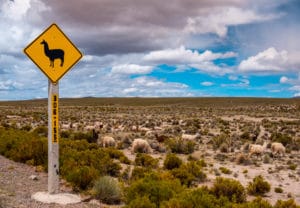 The remainder of the ride had dark and upset clouds following us.  It was a race to skirt the rain again and it was looking ugly.  For hours we were riding along side of huge rain storms which we could see easily.  We ended up in probably one of worst towns we have been to since entering Bolivia, Uyuni.  It is a shit dirty place but it has a purpose — it is the last town before the salt flats.  Will and I ran to get $30 from an ATM to last us the next couple of days.  It started blasting rain.  We also bought some snacks because we were told our hotel — the Salt Hotel is remote.  To be honest, I was looking forward to the hotel — seemed very cool idea.  Anyway, we all blasted out of Uyuni and I hope never to go back — I think I caught some kind of desease just visiting.  Rain pounding and muddy and gravel roads ahead we finally made it to the hotel. 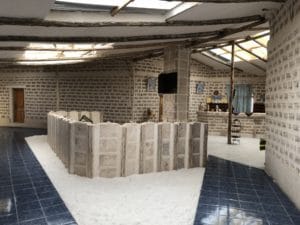 Disappointment does not start to explain my feelings when we finally arrived at the salt hotel.  Will and Manfred were in shock.  The hotel is a dump.  There are 2 other Salt Hotels right next to us and sadly, they are real nice.  Fuck Edelweiss for doing it again to us.  We unloaded and made it into the lobby and hotel which in fact is actually all made of salt.  The bricks, the walls, the chairs, the beds, the floors — check, check, check… made of salt.  That is neat but its dirty and we know the drill.  Hair from the former inmate of my room around and no hot water until 6:30pm until 8:00pm.  I wear my flip-flops so I dont have to touch the bathroom floor.  That said, the shock is over and I no longer am upset — it just sucks.  The pressure from the shower is 4 measly streams from the shower head which has about 100 holes — so 4 our of 100 is real hard to get wet.  But as usual, I play the limb game and wash one limb at a time so I dont go into cold shock.  It 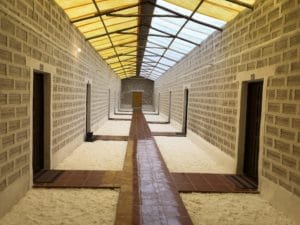 The next morning we woke up, got dressed and I’ll spare you the breakfast — n0t.  We got ourselves ready for the 2 jeeps to take us to the salt flats.  Everyone got a pair of high rubber boots and we were off.  The drive was 7km on the wet lake.  The morning stared off real cloudy and dark and that sucked.  The good news is that when we were leaving, the sun came out and it was incredible — for those after us — so timing is everything in this case  — our loss.  I really was so psyched to get a great picture and this was not going to be my day.

Peter, the Bolivian salt lake expert took my iPhone X with its great camera and put me out of focus on each and every shot he took.  The 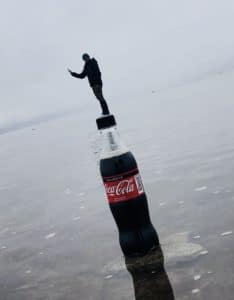 idea was perfect — big coke bottle and little Phil.  I brought the diet coke bottle with me as my prop — but Peter could not execute.  He constantly took pictures with me blurred and the coke perfect.  Peter, your fired!  I should have read about taking pictures and the use of perspectives.  I would have fixed the issue with one single aperatuer setting on my Fuji camera.  But unfortunately the iPhone X automatically focuses on the foreground and blurs the background — serves me right for totally trusting Apple.  A wasted opportunity.

Anyway, I got some images, not great and sadly, that sucks, but thats life.  Below are some pictures… 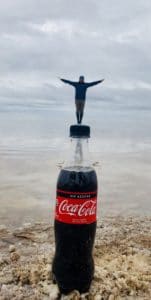 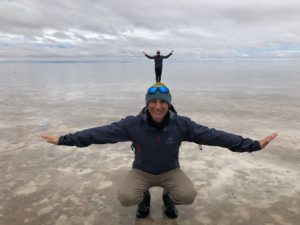 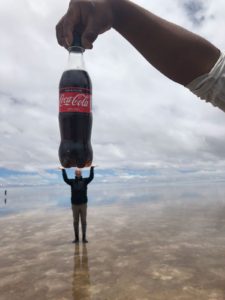