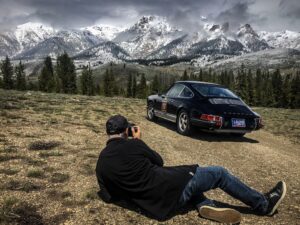 Feature image is of my purpose bought for rallies, concourse restored, 1971 Porsche 911S — the fastest production engine for Porsche in that era.  My bud, Igal and I went out one day while driving on the Ramshorn Rally to take some pictures of the car.   Igal is the best possible partner to do some scouting and then shooting to make this delightful Porsche looks its best.  In fact, Igal is so good, he suggested some amazing spots and although I can’t remember, he probably chose the middle of the road.  I took the picture — so I would say we made a great team.  I like this shot of my car.

So its been quite a while since I finished the rally when I took my 1971 911S throughout Idaho, Montana and Wyoming — I think about 1,500 miles in all.  I’m here back in Boca Raton for almost a month and that means I’ve missed the opportunity to give a first hand view of my feelings at the time of the rally — but then again, I was having so much fun and it led to so little time to rap on a blog.  Then I got lazy.

Lets go back a few steps from where I left off last, I was in Los Angeles visiting my buds and Luftgekhult, the cult-like affair held in the Universal Back Lots for over 10,000 Porsche loving evangelists from all over the world.  Ok, so that event was over so now moving on to the next bike ride, ending in Bozeman, Montana — starting point for the Ramshorn Rally. 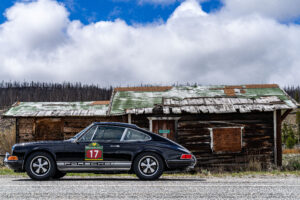 First stop was a night in Las Vegas again — this time I stayed at the RedRock Hotel off the strip because I thought it would be easier to get in and get out of dodge easier with a motorcycle and find less traffic.  I’ve always wanted to check it out and shockingly, the cost is about the same as a strip hotel — so I got there around 4pm from LA, checked-in, grazed over the dinner buffet which was not bad, went to bed and on to my next location — Park City, Utah.  By the way, if your interested, I had a bad experience with the RedRock… Housecleaning sucked and I found hairs, plugged sinks…  Never again, thanks and too bad.

My trek should have taken me through Salt Lake City, Utah, but this trip was never going to be just a major highway trip.  Park City got me to a smaller market and some nicer B-roads.  Next stop 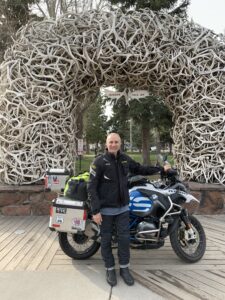 was over to Jackson Hole, Wyoming and I loved that stop.  I found the town to be small but very touristy — fun of sorts but more important, the ride there was through those much welcomed C-roads, meaning winding, small and no cops.  By this time, my riding has solidified — while I’m never the most confident on gravel or sand or mud — but these are not those — these are nicer roads boarded by huge mountains, rich in green — but in this case, white snow and trees.  More on that later.  Its Mid-May and yes, the snow is still deep at higher altitudes — I’m hanging around 5,000-7,000.

Ok, so from Jackson Hole my goal is to get into Bozeman and get settled one day prior to everyone else coming into t0wn.  My ride took me through some fantastic scenery — who knew that Montana is really mountainous and snowy?  I skirted around Yellowstone National Park without ever breaching the park — although one would never know — there is no real towns around, no traffic and yes, no people in Montana — huge state — no people. 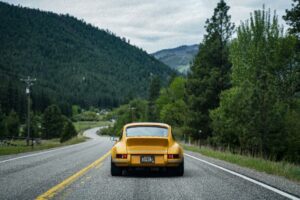 Getting into Bozeman I get settled — and in the afternoon meet the large transport carrier which delivered my car into town from my garage in Florida.  After unloading, I bring the car to the hotel and its now time — I see a scattering of other cars ready to rumble.

The day of the rally is kind of quite — opposite to what I expected.  I met the organizers but nobody really is there to fill you in but the first step in feeling like I’m in the rally is when one of the staff put on the rally decals on the front hood and side doors — Its now official.  Igal’s, my co-pilot flying in from Toronto is late due to tons of delays.

Sadly, the rally in the middle went fast although it was a 5 day event — my recollection is good enough, but the idea is that you wake up in the morning, have breakfast, sit through a briefing of todays route, weather, road issues, lunch location and info on cops, etc.  That is virtually every day.  While the location of the evening may change 3 of the nights, while the others are really day trips within the game town — the process is always the same.

How about we focus on the highlights instead of going day-by-day.  First, its now May 17th and there is snow everywhere in Montana, what the fuck?  Makes no sense to me and its hard not to stay away from that thought during the rally — snow?  Next is the roads — perfect.  Picture long 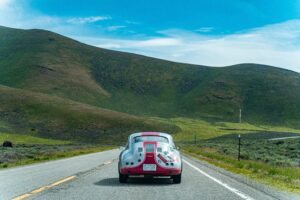 and endless winding roads weaving through and around the altitude of mountains, tons and tons of rivers and streams — just picturesque — no cops.  Let me repeat — no cops.  That means 35 cars, each a Porsche with drivers that want to take advantage of everything the location has to offer.  I can go on about that for hours — Just amazing and lots of smiles.   The 71 911S smoked and did well.  We had mechanical issues of course — but Igal and I both had the same attitude — just go with it and not to focus on the negative.  Perfect.

Food was average, but thats not really what this thing is all about.  Participants were interesting.  My read is that many are super wealthy — many are wealthy — and many are above average.  Only a few touted their wealth — most were just guys playing car games without a stupid LCD monitor, but real life. 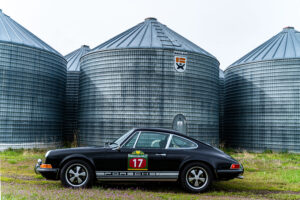 A small fun story happened just after lunch in a small town in between Bozeman and Sun Vally, Idaho.  Our route should have taken us 3 or 4 hours to get from the lunch location on to Sun Vally, but nope, that was not to be the case.  Apparently we missed the cut-off — and that was not good.  Worse, we had no gas and missed our opportunity to top-off the tank hours prior.  So we kept driving and got into Idaho but not the right part of Idaho.  Continuing on we rode a few hours and realized the critical error — so now what?  Like we really had no fuel in the tank.  Turning back was not an issue since we would certainly have run dry of fuel.  LUCKY enough, we were at the top of a ridge — so our best bet was to coast down the very steep road — and we did.  Almost 22 miles of downhill in neutral — yes, 22 miles of super steep and curvy cliffs at about 70 mph without much breaking power.  Keeping the story short, we finally rolled into Salmon River, Idaho and got the much needed fuel with just a drop in the tank left.  Thank the lord we did not have to backtrack or it would have been a long night.  Finally rolled into our hotel late — just before dinner.  Fun day — Igal was a hoot which always helps.

The rally ended with a dinner — some awards — I along with Igal got “Best Neighbor” award.  The transport was ready to pick up the car and was well on its way by the time dinner was held… That was a bit of stress relief…  Rally over.