Running away from the rain is not a bikers favorite activity.  While it’s been a fun couple of days — its also been a pain in the ass trying not to get wet while riding to my next destinations.  The good news is that I only got a few sprinkles on me in the past  2 days so that is a win.  Thanks to my trusty radar app for that.  No thanks to the weatherman on morning television who has the best job in the world and Accuweather that said there was no rain on the horizon.   Can I file a grievance with anyone about that?

So two days ago I rode from Jackson, Mississippi to Dallas.  A pretty painful ride in general — nothing much to see along the country highway route.  The land was flat, the communities were poor with broken houses and the sky was grey.  I really didn’t care much — really, I went into a trance and listened to Fox News and my music in my helmet along the ride.   As I got closer to Dallas, man the world changed.  All of a sudden the city became lively, modern, clean and really nice.  I have to say that I stayed in Plano, Texas and not inside of the city core to avoid traffic, but I was really impressed with the livability of this part of Dallas — as nice as any clean and modern city that I’ve seen.  Settling into my hotel, I then rode my bike to a Whole Foods for dinner which I happen to see riding in — just 5 minutes away.

I decided not to wander in Dallas since I’ve been there before many times and I’m not sure it has anything super special to offer in the limited time I had.  If I felt like doing something, I suppose that I would have gone to Fort Worth and to the cowboy area there — something totally unique.

Yesterday, the ride took me from Dallas to Amarillo, Texas.  Another very boring supposed to be 6 hour, 360 mile ride.  Running from rain was the theme of the entire day and the radar was red hot alive.  I really timed my ride as I saw holes in the radar and the actual ride took me almost 10 hours because I stopped quite a bit to avoid getting beaned by rain.  The lightning was also active — but very cool — lots of horizontal lighting for an interesting but shit-in-my-pants show.  I brought out my rain pants and jacket and grinded through the pissing rain at times.  Worst, the biggest fear is hydro-plaining with only two tires and think about that often — Slow is Pro — fits this scenario well. 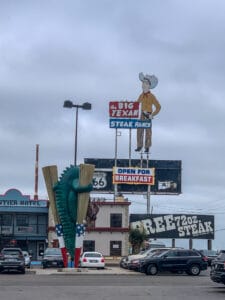 Got to Amarillo around 7pm, went for dinner at The Big Texan, home of the Free 72 oz Steak if you finish it in 60 minutes.  They picked you up and drop you off at no cost to and from my hotel with the cheesy long horn limo along with an incredibly dirty interior full of junk and a super-character limo driver.  I shared the car lift along with 5 other guys who were also bikers from Slovakia on holiday –  whom I will spend some time tomorrow during my ride to Santa Fe.  If your interested, The Big Texan is massive with seating I would guess to be in the 300 person range in the dining room, maybe more and its packed with tons of staff and a massive amount of visitors.  Outside the dining room is a massive souvenir trap shop stuffed full of the masterful marketing of everything Route 66, Texas, cowboy and anything these guys can stuff down dumb fuck tourists.  There is also an ice cream stand, a fudge counter with tons of varieties and hallways full of fun stuff to see.  I had a laugh when passing a 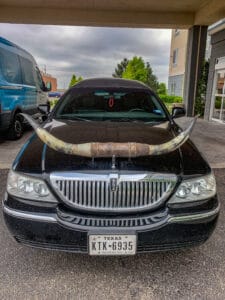 series of pictures on the walls which are 3D Holograms when you walk past  in one direction and see an old lady or an old man or a farmer or a little girl in ponytails and when you go in the other direction, they are shockingly realistic skeletons inside the same persons head silhouette — seriously cool — I walked in each direction at least 3 times through the 7 or 8 pictures.  This place is just packed full of stuff to intrigue, or sell wares to unsuspecting visitors.

Why on earth is The Big Texan so busy with guests?  Route 66.  Amarillo is parallel to US 40 — Part of Old Route 66.  You cant imagine how many people track the old Route 66 from Los Angeles to Chicago or parts thereof — tons and tons daily.