Feature image is of  view outside my window in our 16 seater prop airplane from Kathmandu to Lukla, Nepal — traveling through the Himalayas — often the altitude of the plane is only a few hundred feet higher than the mountains surrounding our path.  Bumpy but fun ride — somehow I know that the pilot has done this trip thousands of times before me — if thats comforting.

It’s so cold in my room tying now that I almost cant do it — write this post.  My hands are freezing just touching the keyboard and my body is frigid.  Of course were here at the lovely Yeti Mountain tea house in Phukding, Nepal at the steps of the Himalayas on our way.   Im guessing its 10 degrees F outside and I’m  sure guessed it by now, no heat in the bedroom — or the entire compound for that matter.  All is not lost, two things that I can’t complain about; first, the water to shower is real hot, check.  The second good thing is that we do get a heated mattress top pad on the boxspring.  Its good, right?  No, I’m wearing 3 layers — wool shirts and sweaters, flannel pants, shoes, wool socks under the cover and still, it’s not right. 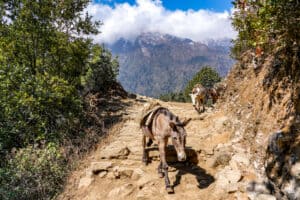 I don’t care, its only a place to sleep I suppose.  Well, not really… I need to move my 192 images I shot on my camera to my computer and a backup drive, then review them.  I need to write this blog post.  Today we showered although as we get closer to the top, we won’t be doing that — that’s a luxury for the elegant class.  Oh, dont tell anyone, but I’m wearing the same clothes tomorrow — including underwear.  I dont think it smells to much.  More about that later, but clothes are limited on this trek.

We’re now at the end of day 1 of our trek to Everest and back so I will suck it up.  All else is even better than I could have 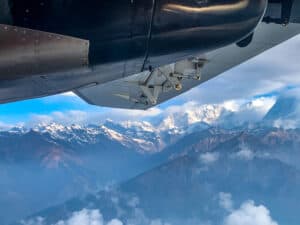 imagined but I will now go backwards to how I got here.  This morning we woke up at 4:30am after spending last night repacking our bags for the 20th time in Kathmandu.  Our guide Prickass told us that we only have 15 kg to bring and our daypack.  I talked about this before, but the essentials like soap bars, sleeping bag, shoes, camera gear — I cant break the 19kg mark.  Paula is at 12kg so we did some sharing such that we both could get exactly 15kg in our bags.  It appears that my bag was actually 17kg after dumping underwear, long sleeve shits, pants, camera tripod, you get it — I dumped.  I said to Paula, fuck-it, I’m going with 17kg and your at 15kg and were done.

We met with Prickass in the lobby of our adequate hotel, the Shangri-La in Kathmandu at 5am to leave to the airport.  Prickass looks at our bags.  He picks 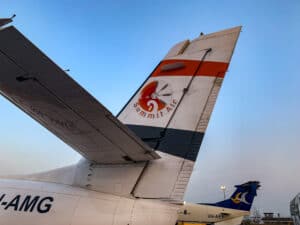 them up, one by one.  He assesses the situation and I can see his head is burning some kind of thoughts.  Could it be that my stuff is overweight? Maybe.  He then sits down next to me and says in a very polite Nepalese way, “Phil, your bag is heavy — maybe should be 10kg and its much heavier — I told you yesterday that you can only have 10kg”  Huh?  Ok, so  he says, no problem, maybe we can leave stuff in Lukla and pick it up when we come back at the end.  I’m thinking, no, not a good thought, but Prickass is so kind and nice and I can see he is not stressed, so I was the same.  In another conversation while waiting for our puddle jumper at the airport, I asked him how do photographers only pack 10kg when the gear alone weighs that.  I seems that you can hire a second porter to carry your bags.  I asked the amount and it was like $250 for the entire 17-day trek, done!  I ordered a second porter and all was good — I can keep much of the contents in my bags after drastically paring down and we move forward — but still tons are left behind in Kathmandu. 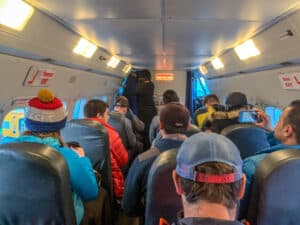 Loading onto our 16 seater twin prop plane, it looked pretty small, aged and used well.  The flight was only 30 minutes so I was happy to get a birds eye view of the Himalayas out the window.  6 Aussies were going on a similar trek and they were great guys so we chatted during our short haul.  When we got around 10 minutes until landing, the air all of of sudden got unstable because we were threading through a serious narrow channel between two huge mountains.  The turbulence dropped us aggressively down probably 100 feet and sideways — its all part of 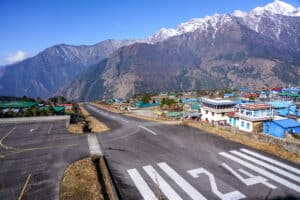 the experience.  Even though I hate flying, this did not bother me although the Aussies ate it up — something to talk about.  Our landing was equally interesting.  The runway in Lukla, Nepal goes up a mountain, meaning that you land at the bottom and the runway goes up the hill at a strangely high angle I would guess about 30-40 degrees — real aggressive incline.  The reason is that we come into the strip at a pretty high speed to fight the winds.  I actually liked it and took a great picture which you can sort of see the runway angle if you focus on it.  When departing, you need the speed on the downward angle so you don’t drop like a rock at the end of the runway which is about 100 feet down at the end. 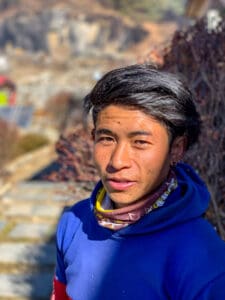 A quick meeting with our two porters, young tiny boys, early 20 years olds who were going to carry a ton of weight up and down rubble filled paths, steps and suspension bridges.  At first you look at the boys and say it’s impossible.  Two boys are carrying Prickass’s bag, Paula’s bag and my bag totaling almost 100 lbs up from 8,000 feet to 18,000 feet in altitude — no way.  These guys cant be more than 5 feet tall – but more like 4 feet-something and 80 pounds soaking wet.  After the initial shock, we moved on and I really did forget about that and focused on the matter at hand, getting to our first nights stop — Phukding and our tea house there.  Phukding is easy to remember; if you remove the “d”, you get phuking.  Easy.

Our trek for the day took us through some very cold temperatures, like 30-40 degrees F and then 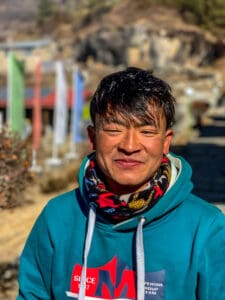 it warmed up to about 50, then back to 18 degrees, with a wind-chill of 8 degrees Fahrenheit where it sits right now.  Along our route we passed our first round of beasts of burden either carrying goods to Lukla airport or picking up goods from the airport and distributing the goods throughout the farm side up the mountains. Donkeys were first and they come in caravans of 20-30 and sometimes even 50 all with bags strapped on their backs.  When on the trail, you need to stand away from the charging animals that come at a decent speed — generally you stand against the wall and not against the open side facing down. We probably were passed by 15 or 20 caravans during our journey today and each time I have to say was more fun than the last to watch.  Another animal carrying goods were Jokypa, a cross between a cow and a yak.  They were massive beasts with large horns like a bull.

The trek was pretty easy although navigation meant to really shuffle for hours around stone blocks, stones, and unorganized material which made walking difficult.  Surround us was a a pretty river coming from a glacier which flows all the way from 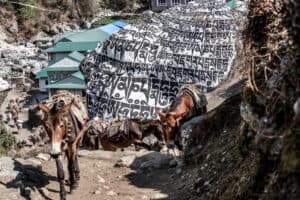 Everest as well as large snow capped peaks — not like the ones in North America, these are real rugged and peaked, covered in snow.  There were real small towns, homes and stores — all very simple and could be dated back hundreds of years while some are newer but rudimentary.

One such store was sort of a restaurant.  We stopped there just for a second to take a break.  Prickass asked us if we wanted to use the restroom.  I walked into the cement covered floor room of the restaurant thinking the restroom was inside.  Nope, look outside, down the stairs and to the back of the brick building.  I see what looks like a hut and open the door only to find a wood floor with two planks spread about 8 inches each looking though you can see the ground.  In this case, this outhouse did not bother to dig a hole or anything, whatever material, be it liquid or sold, is getting deposited about 2 feet below 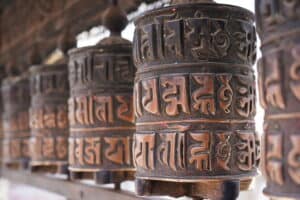 and whatever our past guest had for lunch is still probably sitting there in plain site.  Another fine experience.

We made it to our tea house, checked in, got our bags and then Paula and I decided to do an additional hike for another couple of hours to towns ahead.  It was great and we passed the Aussies again.  We finally got back to our freezing room with no heat, took a shower, and got dressed as we had before the shower and got into bed under the cover to keep warm.  Dinner followed and we will meet tomorrow at 7:30am to start our 6 hour hike.  The weather is looking a bit chilly, so what the heck, we truck on.  Looking forward to it.