Feature Image is one of the literally dozens of massively hight mountain peaks — largest in the world.  Prickass is constantly pointing out mountains and their heights — but it goes over my head — the names are so confusing.  Take the largest mountain in North America, Denali in Alaska and that is the ante to get into the Himalaya club.  So when we see peaks, they are like 25,000 feet to 29,000 feet high — so impressive. 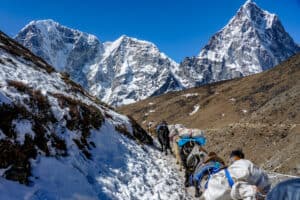 Last night was pretty hard to handle here at the Pheriche Resort.  The so-called Internet had died, it was dark and the altitude really gets to your soul — your head is heavy, your eyes feel the burn and you just don’t want to move.  Add to that the fridged temperatures inside and we decided to leave the pain in our beds under our sleeping bags at 8:30pm.  Lights out. 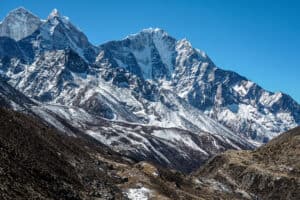 It is kind of impossible to think that you can sleep from 8:30pm until 7am the next day, but I did — off and on.  Around 5am I wanted to take a piss but it was just to fucking cold and the thought of getting out of my comfy sleeping bag was not going to happen.  So I waited until 7:30am and then let it loose — but strangely enough, it was a trickle.  I could not drink either.  You’re supposed to drink 4 liters a day of water, but I find it hard — just too exhausted to drink, oh well.

Today was another acclimatization day in Pheriche.  We went for a 3 hour hike pretty much up hill for the first hour and half or two hours until we got to around 15,375 feet high and then back down.  Everyone does the same procedure on this day and we saw tons of trekkers going up the basically vertical hill — zig zagging along a 2 ft wide path.  I think the idea of this exercise is to go higher and get use to the breathing at over 15,000.  To be exact, we started at just shy of 14,000 feet so we did go up about 1,400 feet pretty quick and it was all zig-zag on very narrow, sandy and rocky paths littered with little pebbles — those pesky little pebbles.  It was a good experience and generally my breath was heavy — even on the light inclines and declines, and on the tougher inclines most of the time, baby steps help tons.  The air is thinner and I feel it.  I can say that we did go higher than Prickass suggested because Paula was not content with his designated altitude — so we went up another 500 feet or so. 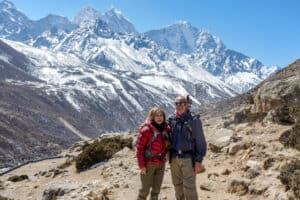 We came back to the tea house, read, cleared a backlog of images to manipulate and really from 1pm its been just sitting and letting our bodies get ready for the next 2 days when we will to up to base camp and then ultimately up to 18,000 feet.

Along a walk out of the tiny town towards the mountains, we did pass Prickass on a little patch of land across the path from the tea house and he was with the two cooks.  They were getting potatoes from the ground that they had stored over the winter in a hole around 4 feet deep, collecting them in a burlap bag and that is going to be the lot of potatoes for the upcoming trekking season.  Pretty amazing that you can burry the potatoes and by in large, they stay fresh in the cold ground.  That was fun for 10 minutes watching. 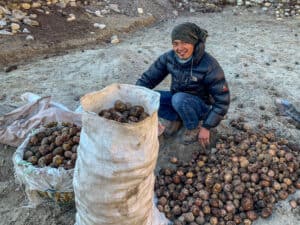 A group of Israeli hikers are now setting up in the tea house, they are coming down from Base Camp and seem to be like the 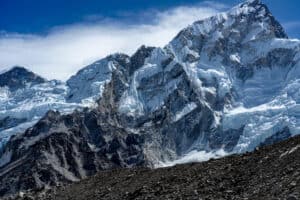 hearty soldiers you would expect from Israel.  This is a walk in the park for these four boys.  This will be a packed house here with lots of groups sharing the main area also a group of 12 from Turkey, and a nice couple from Alaska.  The guy is a doctor in his late 20’s, early 30’s hailing from Missouri through Texas and medical school in Alaska by design.  His wife or girlfriend is a cute young lady, native Alaskan, in her mid 20’s, she just graduated from University and they are now traveling before she starts her new life journey working.  All of the 20 something people here are coming down from Base Camp and have had the experience.  Interesting enough, although the couple from Alaska don’t mind the cold outside, but they are equally suffering the non-heated tea houses inside along with the altitude.  I don’t feel quite so bad now. 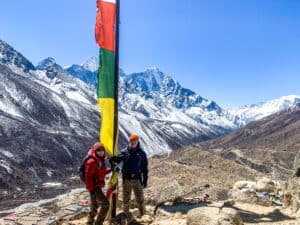 I was secretly hoping that it would be quiet so when I have to take a dump, the dirty slimy hole would not be clogged with others turds — no luck, its going to get ugly since I did not shit today.  You have to think about these things when trekking in the middle of nowhere and your only option is dropping your drawers in a freezing cold box with a hole in the ground.

Ending the night, I hate to report that my first attempt at squatting a dump was unsuccessful.  It looks easy, but my leg muscles were burning and no activity — I tried.

Bed time again at 8:30pm since the lights are basically out and temps have dropped to beyond human ability to fight outside a sleeping bag — and a normal breakfast at 8:30am.