Feature image of this Porsche Carrera 550 Spyder – race warn in the Mexican competition, Carrera Panamericana where it took first place in its 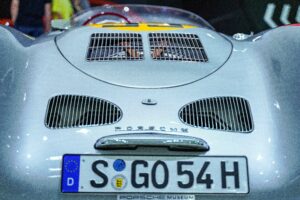 Its been an action filled couple of days since checking out of my hotel Heidelberg, Germany.  I’ve been to the world headquarters for Porsche and then today to BMW Welt (World).  Well, that sounds like no big deal right?  Well it is because nothing is close and I seem to run out of time — all the time. 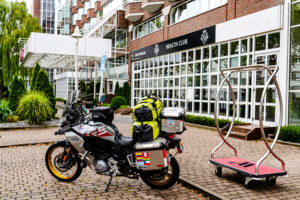 Ok, so first things first, yesterday leaving the hotel, I rode the 45 minutes in a soggy morning — in fact, I waited for the rain to stop which was coming at a good clip until about 9:30am.  I was of course up early but by the time I ate, organized maps, packed, brought up the trolly, loaded it up and brought everything down — I waited until I thought the rain was drizzling enough to ride safely.  I did put on some Gore-Tex pants over my kevlar riding jeans to protect me.  I still dont have a Gore-Tex jacket but that’s fine — It was a cool morning in the mid-60’s, fine for riding — George seemed happy.

I got to Porsche Platz (Plaza) which consists of the main manufacturing area, museum and offices in Stuttgart, Germany by 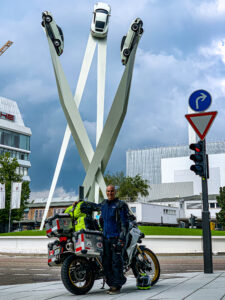 10:30am.  The area was abuzz with tons of visitors to this epic site — home of the worlds best automobile — not negotiable, it is.  Parked George, got up to the lobby and paid the nominal 6 Euros to visit the museum.

For me, the home of Porsche is really like my bro Craigy said, its like the Indians going to the Taj Mahal, the Jews going to the Jerusalem wall, the muslims going to Mecca.  I feel like at home.  I think, not 100 percent sure but pretty sure that the museum owns about 600 cars and they display many of the most prestigious models all the time and the rest are circulated.  Their is always an exhibition on display and this time it was showcasing the 917 Race Car era — a time when Porsche owned GT racing in the 1970’s.  I spent a good 2 hours weaving and dodging the museum full of colorful and awesome cars.  I had a great time and 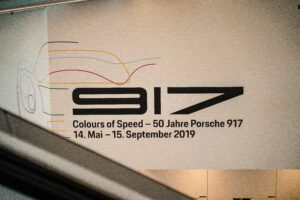 it hits my soul — I left confident that I am in a happy place for the time being — being able to visit at will this place.

The rain had now stopped and it was time to get back onto the Autobahn and play stupid Phil and George – and I did play.  Riding at ridiculous speeds on George, the raw emotion of getting on a never ending road at any speed I want or can comfortably (sometimes just a wee bit uncomfortable) navigate.  The next exit was a two and one half hour ride to Munich.  I just want to say that I really could spend hours on trying to expel my feelings about the fact that the autobahn seems like a real good idea.  I have yet to see traffic 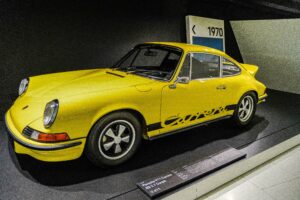 or an accident on my long route since leaving Belgium.  It only makes sense because nobody needs to weave and dodge lanes — because you can go at any speed you like — outside lanes go fastest and lanes moving towards the shoulder get slower as you move in lanes.  It works.  I also yet to see a police patrolling the highway in the past 3 days.

Anyway, riding into Munich I had chosen to stay at a Marriott hotel branded Aloft at a hefty 118 Euros per night ($140 USD). I think its their hip brand designed as a minimalist architecture — concrete floors and modern fixtures.  Breakfast is free which is always good.  I checked in, went to

my room and just hung for a minute so I could get some food.  I went next door to the traditional German pub.   I wanted to order bratwurst (sausage), sauerkraut and whatever.  My server talked me into getting Munich chicken schnitzel — Ok, I’m game.  It arrived with cold potato salad — tasty for sure — washed down with a pint of fresh beer — smoooooth.

I had dinner with a Kuwaiti, 71 year old man.  He was sitting across from me so we hitched up and spent the dinner chatting about life.  A heavy set – but not fat – man, somewhat rotten teeth which I had focused on for the first few minutes — but he had lots to say about his life in Kuwait and just generally a super nice man.  He lives in Kuwait for half the year – no taxes there so I could possibly add it to my approved list of places to live?  The other half of the year, he lives in London.  He bought his London home in 1972.  Can you imagine buying back then and the value it is today?  Well, he told me, its worth $10 million now and he paid something like $100,000 back then.  I cant remember his name so lets call him Fahad, is in Munich because his wife is having surgery for her shoulder at the local hospital and he is with her.  He does not like German people — they are cold hearted.  He loves London people — wonder why?  But he is not your traditional Arab in that he is well westernized in most aspects except his super duper thick accent which only about one in every 5 words are clear enough to understand — I tried hard.  Fahad lived in Los Angeles for 4 yers in what he called the Black area.  I said Compton?  No worse he said, in Watts — oops, yah worse.  Why on earth did you live there I asked?  Well, its next to the Kuwaiti oil refinery — ah, makes sense.  But I had a ton of questions about a semi-white guy living in Watts, one of the worst areas for crime in maybe the entire world — a bit of an exaggeration, but not far off — Headquarters for the LA gangs.  He shrugged it off, but laughed a lot.  Farhad is into horses — he currently owns 16 race horses.  That was a 30 minute discussion in itself — Oh, I loved Farhad.  Last and most shockingly, Farhad Loves, Loves Donald Trump.  No shit — he loves Trump.  He thinks that Obama was “soft” and Trump is strong.  He cares, the Americans are still in Kuwait protecting them from Iran and Iraq, Kuwaits neighbors.  Anyway, Farhad had 2 beers (which he drinks every day for past 50 years — exactly 2 beers) and I had my one and it was time to move on.

My hotel is across from the Munich train station and there is a huge bustle of action with people, cars and general activity within steps of my hotel.  I’m not passing judgement Paige, but it seems — only seems – that many of the people taking trains need a wash.  I took a gander at the inside of the station, walked in and to my shock and surprise, it was filled with incredibly nice food stalls and grocery shops — very, very clean and appetizing.  I walked around a bit — bought a 1 liter of Diet Coke and went back to my room — it was already late.

This morning I woke up at 4am, did some writing and picture processing, had breakfast and ran out to the BMW World 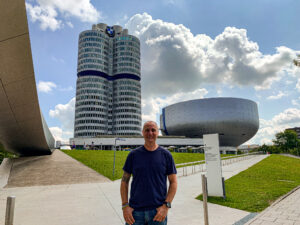 Headquarter, Customer Center and Museum — known as BMW Welt.  Its a humungous campus where they do plenty of manufacturing of automobiles.  The Customer Center is probably ten times the size of Porsches facility — super modern and welcoming to visit, see onsite virtually every production vehicle from BMW, Mini and Rolls Royce brands.  As well, their is a sprinkling of BMW Motorcycles everywhere.  From a visitor point of view, I would say that this customer center is in the top 3 places I have ever visited for size and interest — even though I really dont care much for BMW automobiles.  I like them, they make a great product, but emotionally, they do nothing for me — although I love the motorcycles. 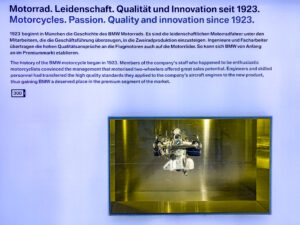 Across the street is the museum as I said, and its equally large — again, at least 5 times larger than the Porsche Museum and probably 10 times more expensive to build.  Its funny to me, I believe that Porsche is the most profitable automobile company on the planet — which is remarkable given its size.  It was profitable for the shareholders enough to buy VW, the worlds largest car company.  But when it came to building the facility, Porsche gets a 7/10 and BMW gets a 9/10 and maybe even a 9.5 — its that nice. 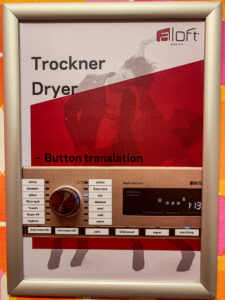 Germany on Sundays — wrote some blogs, catching up – and decided to do some laundry which is free here.  The hotel has machines that cost nothing to run.  I went down to the lobby, got a detergent pack and did my laundry thing — all good.  When it came to drying, I just could not figure it out.  The machine was not working.  I went downstairs to ask the reception how to work the dryer.  The nice guy came up to the laundry room with me and told me that I was trying to dry my clothes in a washing machine — oh.  Not my fault, they both looked the same.  Anyway, were in drying mode now.  I’m not ashamed or anything, but I have been down to the laundry room 7 times to check on the dryer — lets say its not my thing.   Im writing this post and all is fine, its now 5:00pm — I’m pretty tired.

Tonight I will haul my lazy ass out to the Munich Beer Garden and get a beer, brat and 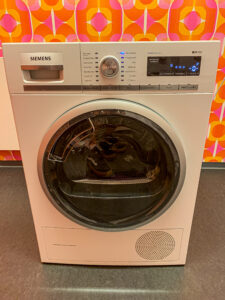 pretzel.  Its my last day in Germany and fuck it, I’m eating and drinking German!

Tomorrow morning is a visit to the worlds biggest BMW Motorrad (motorcycle) dealer which is located just in the middle of Munich – 3km from BMW Welt — and then onto Prague, Czech by late afternoon.