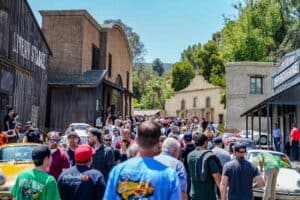 I’m going to work backwards on this post and save the reason for coming to the biggest, baddest and hippest Porsche event in the world, Luftgekuhlt in Los Angeles — this year at the Universal Back Lots as its artful setting.  No, I’m not going to talk about that first.

I really want to talk about the images I shot at the show.  I came with no game plan, but I suppose I brought my favorite mirrorless camera with a 28mm-75mm — F2.8 — bla, bla, bla…  so I could catch my 85 mb super high res image files of cars, then clean them up and… Do something with them in 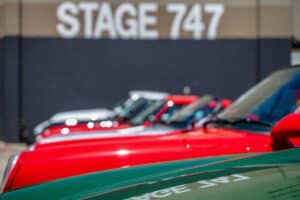 BORING and who gives a fuck! — I would get bored quickly.

Before I get too far into this, I passed a few Porsche loving celebrities along with the other 10,000 or so visitors, but none more important to me than our favorite, Jerry Seinfeld.  Its actually funny, I saw a friend of his who is a car guy which I have followed, an ex-writer on Seinfeld and I then looked for Jerry because the two are Frick and Frat hanging out at the coffee shop in Malibu on Sunday mornings — but no Jerry in sight.  Then a 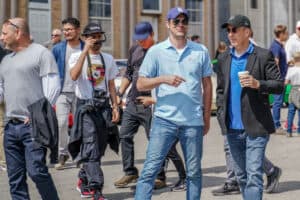 second later I hear Jerry — You know that voice?  I turn around and yep, its Jerry.

And the sad thing was after getting into the backstage compound, my Porsche fever started to amp up and I did take 30 or 40 pictures of cars and the super duper cool Hollywood setting before I had an epiphany.  What pray tell came over me to make the day a bit more fun?  Look, I’ve seen Porsches, more than many people.  I know basically all of the important models and the not-so-important models that are just as awesome.  But how many Porsches can you look at and take pictures?

Well apparently, after watching the people around me, I would estimate that more than 50% of all onlookers take pictures with either a 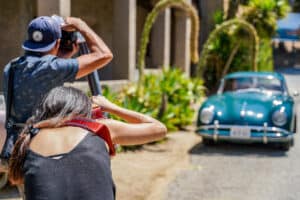 DSLR/Mirrorless or iPhone camera.  This photo revolution is real — everyone shoots pictures — and I mean everyone, old and young. So I thought to myself, what about shooting people who are shooting the cars.  Hopefully I could get some creative slant to this.

So it started off with my brethren, those who shoot larger mirrorless cameras.  Yup, I walked around, and it was like fishing in a stocked pond — way too easy.  I got tons and tons of those because its all around you — like everywhere.  And that was fun for a while.  I would find someone about to shoot, then I would trot over like the creepy possessed guy that I am and I would 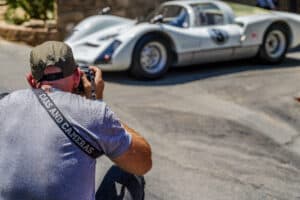 shoot them over their shoulders — trying to get the same shot they were getting.  I did that for about an hour believe it or not and I was seriously having fun.

But as we all know, if you put yourself out there, opportunity always creates more opportunity if you keep your eyes open.  I had an epiphany — I watched everyone around me with iPhones shoot, but the best part was I could see what they were shooting in the phones’ screen.  New slant… — let’s hunt down iPhone shooters and fuck them mirrorless losers.

The new goal is to seek out them iPhones while they are in the midst of shooting and catch the image on the phone.  Not as easy to 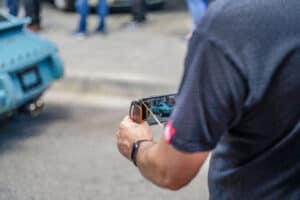 do, but thats the fun part — it amps up the game.

I now wandered like an insane creep looking for people while in the process of shooting.  And let me be honest, its not as easy to capture because getting the images on the iPhone in focus at the exact right time is difficult.  More so, I also tried to get pictures where I could see what they were shooting in the same shot as the image on the iPhone.  Wow, I was busy. 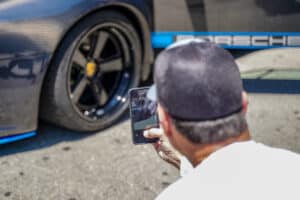 I know it sounds stupid and a waste of time traveling across the entire country — coast to coast — just to track like a maniac people shooting cars and think thats a fun Porsche day.  But it was worth it.  I got tons of those images — more than I can use for this post — but who cares, it’s always great to have a project for the day.

So let’s talk about the show called Luftgekuhlt, meaning in German, “air-cooled”, referring to Porsches manufactured before 1998 which are generally the most prized for collectors and custom outfitters — really pieces of art.  In L.A. speak, the air-cooled Porsche lover is hip and dudish — 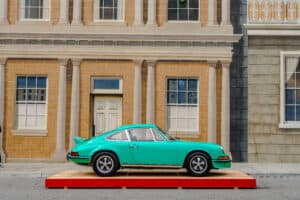 while Lamborghini’s, Ferraris and go-fast cars are not so cool — just Duds, not Dudes.   This leads to the audience of this specific show attracting over 10,000 sold out car lovers.  The best part of it all, I would say the average age of participant was in their 30’s or 40’s — with tons and tons in their 20’s — which is a bit of a shock — compared with Miami where its some Cuban or South America, 50 year old guy who is annoying — zero cool.  L.A. Rocks for car culture. 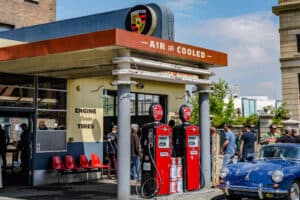 carry on to my adventure leading to Bozeman, Montana, starting point for the Ramshorn Porsche Rally where I will meet up with Igal and drive my 1971 911S which is now in monition to meet us there for the week long rally along with 35 other Porsches.  Prior to knowing the date of Luft, I was just going to ride from Miami to Montana and back — but with the timing working out, I could do a triangle and go to L.A., then to Montana, then back to Miami — perfect.

Now in 100 words or less, I will describe the setting of the Porsche Show:  The Best show ever.  The organizers took the Universal back lot and flooded the massive area with cars of every age and color — 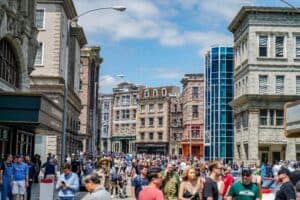 possibly 500 cars invited to participate and a thousand of other Porsches outside in the general parking lot — Only in L.A.. Different fake settings of buildings, streets and locations were represented on the lot; Mexican town, Cowboy town, old New York neighborhood, glass buildings…

Most cars attending fit a specific gap in the Porsche evolution and all were perfect — either weathered paint, best-in-class restorations, customized and personalized models or all original examples.  They even built a Porsche gas 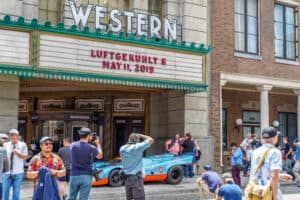 station and garage backdated to the 1950’s which was fictional with a garage where Porsche gave out crap.

So much fun for a day — People watching with a purpose.