I’m going to give you all a lesson on how to rate what I will call a very good hotel.  After traveling around the world for years, I am pretty good at scoping out decent hotels.  Certainly we can assume that having air conditioning is a good thing.  A clean bathroom, bed and dust free room is 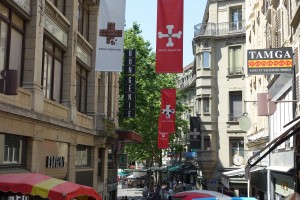 key.  Television works well without headache — If they have Fox News then they get an automatic upgrade in status.  Anyway, you get it.  I’m into clean, safe and happy.  Location is great for sure, but I can walk or taxi if need be.

But to become one of “Phil’s TOP HOTEL AWARD” winners, that’s something else — that is the best of the best.  Rarely do hotels achieve such status.  Almost impossible.  It takes that extra special achievement from the management of the hotel to provide the guest.  Certainly, it is not limited to one hotel, but not many can get there.  Lets say that their are a million hotels in the world — I going to guess that only less than 50 in the entire world get the PTH Award.  It’s all about the customer.  I’d be a liar if I said that I don’t want to travel only in 5 star hotels, but we all know that this applies to 5 star, 4 star or even 3 star hotels — I don’t care. 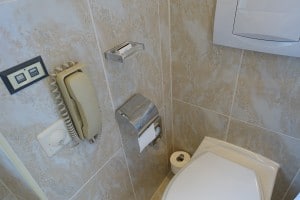 So last night, I stayed at such a hotel.  What on earth could the hotel have done to prove such huge value?  When I saw it — I knew that this hotel was extra special — An Award winner!  So here goes, let me tell you…  A box of matches, along with a match box holder next to the toilet.  So simple.  So inexpensive to implement.   Unique?  Absolutely!  Needed?  Oh yah!  A life saver?  Quite Possibly!  I love the idea folks.

I wish I could have met the brainic who invented and implemented this small but over the top device.  I would thank him or her personally.  And to that person, you are the reason that my hotel won the Top Hotel Award.

Ok, we did some usual goofy and lame visitor stuff in Lausanne.  Won’t bore you.

That said, saw one place which was kind of neat — Le Musee Olympique.  The guy who actually invented the modern day Olympics had the idea in the late 1800’s.  Seems strange, but Baron Pierre de Coubertin invented the entire thing by himself.  Born in Paris, then moved to Lausanne, Switzerland because it was a neutral country.  He wrote the entire case study and charter himself by hand and got the world to accept his idea of Olympics.  Fucking crazy notion, but to execute this strange idea to have people compete in a sport event for no more than 16 days every 4 years in a different city on all continents.  He developed the 5 rings logo. He developed the idea of gold, silver and bronze awards.  Pierre thought everything out.  Wow.  Smart dude.

Anyway, the headquarters for the IOC is still in Lausanne on the beautiful setting overlooking Lake Geneva and the Alps in the background.  The IOC seems to bleed money.  We went to the Museum which is more like a modern hall of fame mixed with history of  Olympics starting 1896. 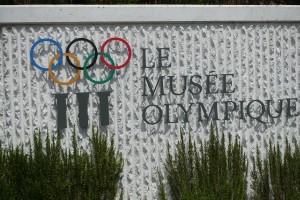 Just a beautiful and large modern building in an over-the-top park setting.  (IOC marketing many locations in city — Image on right is of Lausanne train station)

Truth is that I got bored after the first 45 minutes even though the place is packed with neat stuff, great multimedia  displays everywhere, tons of interactive showcases, all beautifully implemented and lots of it.  Some mind blowing.   But… I can only take so much olympic talk.  I started getting sleepy.  Had to go. 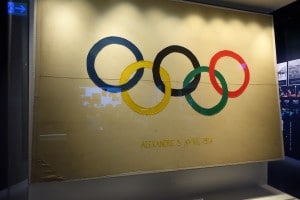 One neat thing that I would point out that was totally amazing — the first Olympic flag from 1912 as seen on the left image.  The extra cool part is that the flag is not perfect at all.  Interesting to think that at such an important event and representative flag, the circles seemed to be cut out like an 8th grader had made it and hand sewed imperfectly.  Circles are not round at all — real flawed.  I like that.  Shows that the process was evolutionary to grow the Olympics.

I will add that Pierre de Coubertin died penniless in Geneva, buried in Lausanne by the will of the Baron .  He put his heart and his family fortune into the Olympics to get it off the ground.  We see fat bureaucrats and probably as honest as their soccer FIFA buddies today running the IOC.  But when it actually was invented and prior to the money printing machine days, the idea was pure and real interestingly clean.