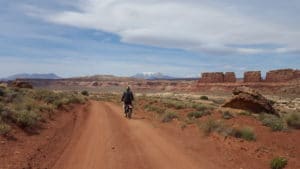 So today was the most horrible and the most incredible and the most exceptional.  What does that mean?  Well, it means that I don’t have a tone of images, nor did I take any videos because it really was the day that I had taken 5 leaps forward in my skills as an off-road motorcycle rider.  Basically, it was the cumulation of everything I had learned in the previous four very full days of riding and learning. 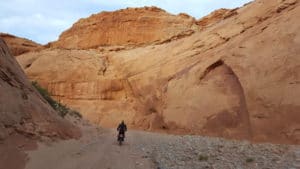 Chris and I left the camp site at 8:30am to meet up with Britt Barton and his wife Nan.  Who are these folks you ask?  We met Britt and Nan at the burger joint the first night we got to Blanding.  Britt saw our bikes and he brought up a conversation about KTM Motorcycles and most important, he rides the same bike as me, a BMW R1200GSA.  Chris and Britt struck a chord about bikes.  I tried to chirp in when I could add value, which was probably just wasted air. 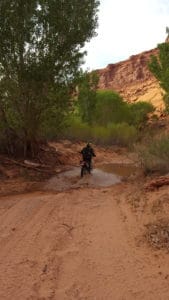 Turns out that Britt is probably the nicest person I have ever met — No, let me rephrase; Britt is the Nicest person I have ever met.  He has worked with Chris each night after I go to my room to map out routes for us to travel the next day.  You see, Britt is an exceptional off-road and likely on road rider.  He handles the massive BMW like I handle walking — its second nature.  Anyway, Britt is super normal and owns his own mortgage brokerage firm in Durango, Colorado and Moab, Utah and super nice.  He has a few bucks to put into very good quality toys — man toys with engines.   I’ve just never been around anyone who just barely met someone new and is so giving.  Might be his mormon upbringing or his nature, don’t know, but it’s strange to me.  No strings, he is a saint.

In fact, the first day of my riding lessons, Britt came along.  We all

rode together for an entire day.  Chris is incredibly patient — Britt was equally patient and I don’t even know the dude.  That’s just him.  He never got pissed when I had to stop to catch a breath or drop the bike.  In fact, he was always there to lend a hand to pick up my bike or show us some scenic backdrop or even the cabin where his great, great grandfather was born — now a local tourist site in the area manned by mormons.

So back to the ride; Britt and Nan met us to go on the ride at the gas station in Hite, Utah at 10:45 after Chris and I running about 2.5 hours.  Well, as a gas station, it’s strange in that its open 24 hours, but most of the time, not manned — just a credit card will get you gas and if you have a problem – suck it up.

Britt had brought a trailer to haul our bikes back to Blanding after the ride which was about 70 miles.  He also brought a full breakfast and lunch already packed up for us.  He just wanted to go on this ride because he had never done it before.  Nan was his passenger and she is a willing passenger floating around these maniac bumpy hills.   Not sure if she understood the entire Phil thing — like taking tons of time to manage me — but she was mostly quiet and patient and I did not feel too uncomfortable.  I believe that she is a 75% Britt.  One thing for sure, she never lost her cool.

Anyway, enough of the backdrop.  The first three or four hours of the ride, I was doing super well.  It was a bit gnarly in stages and I was shocked that I never fell — well, not until maybe hour three.  I was in heaven — for a while.

Then came the realism.  So after about the fourth hour we hit much bigger rocks measuring about 5 or 6 inches each and some were very big rocks and holes and lots and lots of hair pin turns with sand and large verticals and drops with these rocks.

Then came the falling phase of the day.

I fell, got up and fell again.  I was lost.  This went on for hours.  Chris and Britt would help and I would do it again.  At one point, I sent Paula a note through my Sat GPS messenger telling her that I am really scared and over my head — not scared for my life or anything — but we need to travel about 40 miles in this stuff and I don’t think I can do it.  I had not text Paula previously, nor after, but at that time, I was seriously snapping my neurons to figure things out.

Christ stuck with me emotionally and he was just the best — Baby steps.  We would hit a rough spot and he would ask me if I was comfortable and I would attempt it 99% of the time.  Only one time, Chris rode me on his bike and dropped me off at the end of a large and long stretch of maniac rocks and ruts and twists uphill where I just could not do it.  Then Britt followed with Nan, dropped her off with me.  Then Britt and Chris would buckle back to pick up my bike.  Chris mounted my bike and Britt followed up.  What a mess!  I hated that.  Everyone was so understanding, but I hated it.

So I trekked on.  I was not going to give up for nothing because I knew the reason I was in the badlands of Utah was to learn and I had two incredible resources who were there only to help.

Net of it was that the second part of the day, starting at about 5pm, I was getting better.  I definitely attempted everything except for the flowing river crossing — even Britt, the man’s-man, had never tried that before.  The water was about 15 inches deep and muddy base, Chris and Britt were not going to let that go down without a fight.  Britt actually carried Nan across.  I walked it and Britt rode my bike across because Chris cant get his bad leg in that flowing water.  Then Britt went across again in shorts (he took off his pants and boots) to drive his 700 lb BMW to cross.  High Fives everywhere — all three bikes crossed the river.

We then had another 16 miles of all that crap ahead.

The best news and all honesty, I went almost the entire 16 miles without dropping — or maybe once, I cant remember.  I don’t know where it came from?  I think that I just did not want to give in and keep everyone waiting again and equally, I needed to gather whatever I had.  I know I sound like a dick — but its true.  I was so proud of myself.  I was so focused that I never saw anything around me and I’m told the beauty was surreal.  I don’t care, I’ll wait on Chris’s pictures.

How did it all end?  We loaded our bikes in Britts truck and trailer that we had left at the unmanned gas station in Hite and drove the highways the required 70 miles or so back to Blanding.  We got back to the motel at 11:00pm and no dinner again.  I was drained, smelled like a skunk (poor Nan had to smell us the entire ride back in their truck) but at least I left super content that I got through it — a huge step and accomplishment which made it all a great leaning day.