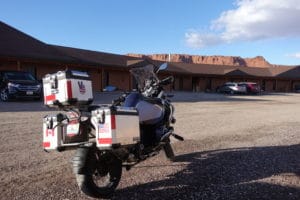 I’m now in Torrey, Utah by myself after getting reacquainted with my luxo and techno BMW R1200GSA — missed my baby after riding the Honda off-road hard core, very utility and purpose built enduro bike.  I settled into a bit of a iffy motel here just outside The Capital Reef National Park, but it has running water, heat and a ceiling — fine.  What was not cool was that the coke machines outside just ate $3.00 of my money — first time I put in money, then it gave me zero, nada.  The next outdoor soda machine was nice enough to take my money and after pressing the Diet Coke button, I got a Coke.  Fuck it, water.

So why did I come to Torrey?  Chris told me last night  it’s one of the most 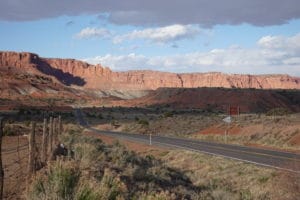 beautiful places in the States to visit and equally, the ride there from Page, Arizona was to be epic.  Chris did not lie — Epic is not descriptive enough.   My ride was for 6 hours and I didn’t want to stop when I finally got to the motel, so I kept riding for 90 minutes until settling into my makeshift home-away at around 7pm.  It’s just one of those happy days.  I loved the ride.  I loved the scenery.  I loved the music coming from my helmet speakers.  I just loved everything.  I also get to think a lot about tons of things…  All without any pressure or concerns.  No Internet throughout most of the ride though — which is a massive, massive  bummer.

Anyway, I came to Torrey, Utah because I can. 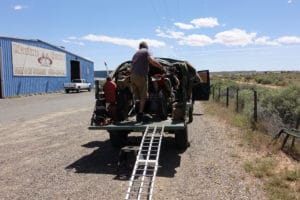 Working back, a couple days ago, Chris took his van, trailer and the two bikes in tow, and I rode my BMW to Page, Arizona, about a 4 hour ride from Blanding, Utah, to change the scenery and trails.  For those who are not aware — which is likely anyone not from the west coast, Page, Arizona is home of the bottom of Lake Powell and the Glen Canyon Dam.  Who cares, right?  My take is that its like another cheesy Niagara Falls-ish kind of place except it has an exceptionally  beautiful backdrop and the lake is full of house boats and yucky motorized stuff in season — and the town is much smaller than Niagara Falls. but still has the same obligatory 2.5 star brand hotels.  Sorry for the insult, but its true.  It’s tacky.  Too bad, because the artificial lake is massive and ubera scenic.  I will say that I stayed in a Hampton Inn and it was new and very clean — Thanks TripAdvisor. 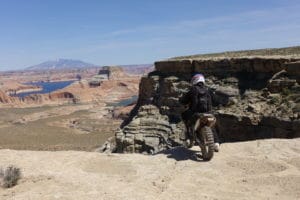 It was also the last day of my training on a pretty short ride — just about 4 hours.  I know that its getting old, but again, the payoff was that we ended up at a location which has to 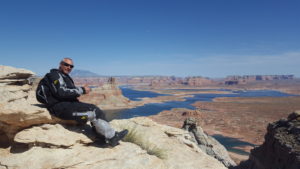 be seen to believe.  Its a plateau with a drop of probably a mile absolutely straight down.  Check out the pictures and click on them if you like to enlarge.  It is real and yes, that is Chris on his bike at the edge of the drop.  My hands were sweating just watching.

On the ride to the edge, I was cautious, but did drop twice.  I know what your thinking…  Phil is still dropping his bike?  Yah, yah, yah, I am.  Its just not easy to ride on two wheels over the crap on these trails.  The elevations are 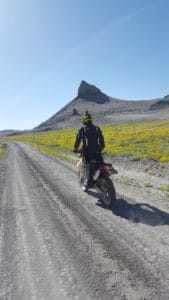 aggressive and the changes in the track and obstructions that can hurt you —  just can mess me up.  One thing I can say is that the drops were not at speed which is a change.

However and this is a big however, not just a little one…  On the way back to return to the trailer, I rode way above my skill grade!  No kidding, I drove at a great speed and never dropped once.  I just kept telling myself that I’m tired of dropping and I super focused but also was relaxed and in fact was able to check out the scenery.  Best of all, Chris really did not have to chirp in my ear through the intercom his editorial — I was really on my own and it all seemed to come together.

I went excite-bike and thanked Chris a ton when the ride was over.  Oh yah, I went ballistic and was so happy.   From the first day of lessons, just a week earlier, to the last training day in Page, we had logged about 600 miles of riding and I went from tripping on my own legs (aka wheels), dropping the bike pretty regularly on a basic run to building confidence and riding over real crap elevations, twists, turns, ruts and rocks and off-camber tracks without incident.  Sure, I have the battle scars; my helmet has a few nits and scratches because of the two hits — unfortunately with my head still in it — and my jacket and pants are battle warn from the 30+ drops over the week.  Thats ok, I have improved for sure ten-fold.  I also believe my road riding has been enriched.

I do know that I’m not ready to ride from Los Angeles to Ushuaia yet, but its a start.  I have overcome the fear and uncertainty of riding off-road.  Now, next step is to go to BMW training in South Carolina on a much bigger, R1200GSA and that should be interesting.

Anyway, I am now finished the training leg of this adventure.  I still have a longer trip terminating in Los Angeles and meeting up with Paula.