Featured image speaks for itself.  Today we crossed the border between Columbia into Ecuador. 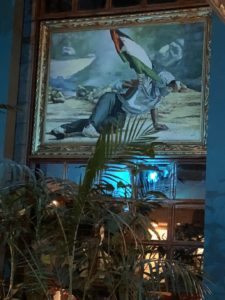 The Saul hotel is not recommended.  If your ever in Pasto, Columbia maybe look elsewhere 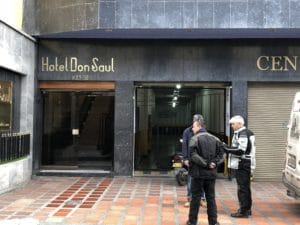 for a raty hotel although admittedly the choices are limited.  No heat in the room last night although I heard that others got hot water bottles — a true luxury when the weather drops in the low 40’s.  No internet and breakfast was not going to happen although I did get some small amount of fruit pulled from the back otherwise it was going to be some meat package in some sort of Arabic soup — the owners are Palestinian and have a huge portrait of warriors to prove it for some reason.  And by the way, don’t go for the coffee, they will make you beg for it.

Ok, so we had a long day ahead of us, but again like many days, it’s not the actual distance, its the obstacles we have ahead that suck up the time we need to get to our destination just  before nightfall.  In fact today we got to the hotel in Otavalo, Columbia, just at late dusk from our 275km journey.

Dressing warm and expecting a cool day riding since the temp started in the high 40’s, leaving Pesto we crossed the town which took only a few minutes and nothing special but I still like watching the people around us and their lives.  Immediately and abruptly the scenery changed to dark green forests and mountains entering the PanAmericana road.  Cant call it a highway really because it never has more than 2 lanes and looks like a normal country side road to me.  Again we started the process of dodging and weaving past truck, cars, small motorcycles, animals and other stuff.  Nothing really changed there from the day before.  Scenery was pretty constant. 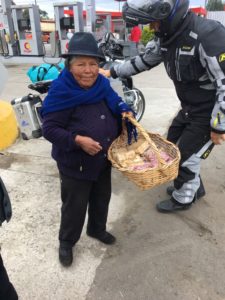 Our first stop after some spirited riding was at a gas station just a few minutes from the border.  We actually hung there for a while killing time because we were ahead of schedule. Old lady on left begging for our money.  Last night Marc said it could take 3-5 hours to cross at the border but he would try to find a “fixer” to smooth it out.   We really expected 3 hours tops.  So we killed time since it was only 10am and we were close.

By the time we got to the border it was 10:30am and what I was about to see was little more 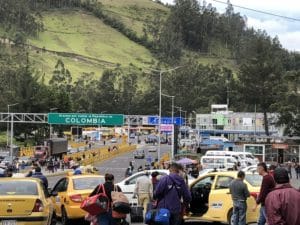 than a shock.  Hundreds of people waiting in line on both the Ecuadorian and Columbian side.  The actual crossing is only about a quarter mile and wide open.  We secured good parking spots in front of the Columbian side and Marc was to do his magic.  We waited and laughed and messed around.  15 minutes later Marc approaches, “we have to wait in line with everyone else”.  Huh, you kidding me?  That line is hours and we have special powers.  Nope, get in line.  So we stood, shot the shit and were all in good spirits for the better part of 3 hours to get our exit stamp. 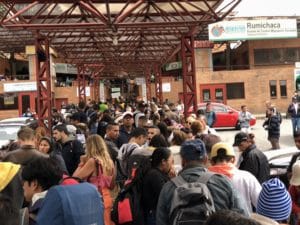 Right after we got into line I started a game while in line to kill time and have some laughs.  I told all that its called; closest time without going over to get the last stamp on the Ecuadorian side is the winner.  Everyone is to give a time and we bet $1US each.  Lots and lots of laughs guessing a time.  I chose 3:45 thinking this is a slow process, Katrin took 3:15, her husband Martin took 3:00.  Manfred, 3:35 and so on.  We didn’t have a piece of paper so Bert recorded everyones choice on his iPhone.  Done, we now are invested in this bureaucratic waiting game.

Now to the Ecuadorian side to the the bikes registered and ourselves stamped into the country.  We got on our bikes in 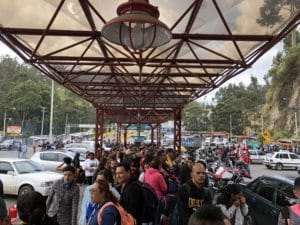 Columbia and rode to the Ecuador holding area.  Got into line an started again the same crazy wait in line.  There were no Americans on either side and in our time I talked to all foreigners which included four individually traveling guys from Germany and one middle aged woman from England, each traveling on backpacks for a year or so.  Ok, so another 2 hours later we were all cleared and who won the bet?   Well, I’m not being bragadocious, but it was moi — 3:38.  Manfred was a close second at 3:35 and he thought that he should get honorable mention for being closest — move away dude.

Bert had a good idea.  He bought a penguin at the shop — no clue why a Columbian shop sells stuffed penguins, but anyway, 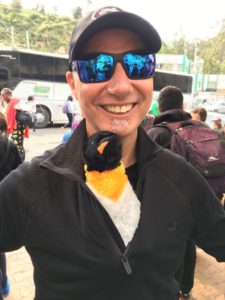 Bert and took a picture of each one of us at the border with the Penguin.  He will then take another picture of the same penguin when we get to Ushuaia.  I thought that was creative.

Now here is the craziest thing starting to drive onto the Ecuadorian roads continuing on the PanAmericana, the roads got virtually perfect — first time since leaving the USA.  All new roads and not only that, they were 4 lane roads carving the mountains.  We were now heading higher than ever and it was getting colder.  Were certainly in the Andes.  The guys took advantage of this new found raceway on which their are no speed limits.  It’s the Ecuadorian version of the Autobahn!  They booted it and I sit my pants.  Of course I could go my own speed and its no issue, but I was holding my place in the middle of the pack and that meant that I was going to keep up.  We were going 135kph through zones posted as 60kph along the scariest heights with generally no guard rails protecting.  At a few cures which were sharper than I had expected, I came in too hot and put on brakes hard — got a few doses of adrenaline and sweat pouring out.  Most the time it was fun but I had to keep focused real good.   This time it was not the traffic which was the obstacle, it was my only desire to keep up with these guys.  Traffic in Ecuador is almost non-existent.  Most beautiful brand spanking new highway and no traffic.

Coming into the town where our hotel was located, they guys kept that maihem going and dodging through the town which was actually busy and congested.  I am not a huge fan of weaving and lane splitting, but apparently that is the way with Germans.  I am not bad at it at all, but we were in a bit of a time limiter since it was getting dark.  Finally we turned into some kind of side street which look as if there should not be a hotel on it. It was off the, off the, off the beat and track in a dilapidated area.

The street had major rocks everywhere and was not finished.  Seems like the people handing out road money forgot this street.  It was gnarly and uncomfortable.  It was like Utah on the worst day but real extreme inclines and turns in the middle.  Not an expertise that I nailed in Utah and that was on a small motorcycle.  I’m hauling a 700 pound animal.  Anyway, if you don’t know by now where I’m leading, I’ll tell you…  I dropped my bike hard and I flew off a few feet.  Not sure what I did, but I surely bruised my ribs and broke my heart since I was 75 percent there.

Manfred and others came back down on their bikes and lifted my bike again from its bad drop sideways.  These giants lifted my bike and got it back upright — and almost impossible feat in my world.  Tong rode my bike up the hill and I walked.  I was upset with myself, but on the other hand, I am not them and this proves it.  What is ahead of me on my trip is a mystery not to be concerned with now — but its reality about my skills.  This is hard riding.  Everyone is so kind and generous here but they have to be thinking the same.

The hotel was an oasis in this small town on the tallest hill in the town. The town known only for its famous market.  Unfortunately again, no heat, no internet at about 8,000 feet high.  I’m thinking about the ride down the rocky hill in the back of my head, but thats for tomorrow.  I wore full on clothing during the night and that included long sleeve shirt, pants and socks.  Its real cold up here in the mountain.  Kind of surprised that Ecuador is this cold but then again, who knew anything about Ecuador?  Fact is, were smack in the middle of the Andes and it will only get colder and higher.