We woke up early to get a fresh start on a quiet Sunday in Quito.  Our goal is to hit Quilotoa Lake, somewhere in the middle of 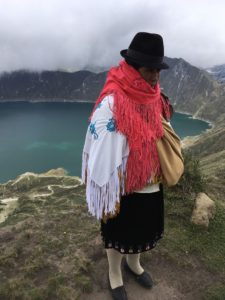 nowhere, Ecuador.  Although traffic was super quiet, it took us a good hour to leave Quito because our bikes and support truck was a half mile away in a garage.   Anyway, after our quiet day off, it was time to move on.

Oh, one other thing, the other Thai rider, Tong, had some kind of business emergency and had to leave back to Thailand.  He was probably our best rider and always was there to lend a hand to help me in need.  Super nice, but his communications skills were abysmal.  I think he understood everything, but he could not really speak English without a giant stutter so it kept him from participating too much with others.  Every single German except for Bernt speak English very well.  Anyway Tong was nice.  Now there were 6 motorcycle participants on this trip. 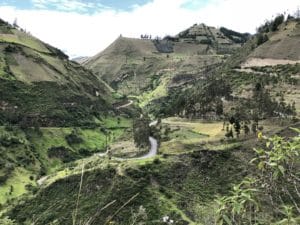 The ride took us about 5 hours after getting started and as usual, through just dramatic inclines and declines carved into the Andes.  Although we were over 9,000 feet of altitude in Quito, this ride would take us to over 12,700 feet and that means its cold.  Clouds covered the sky most of the ride, but thank heavens it did not rain.  My new strategy now is to hang in the back of the riders and do my own pace.  I’m never a minute behind or anything but I just don’t want to hold anyone up and I really need to think about my safety and ride within my own ability.  I am definitely getting better at turning with speed, but with no guard rails at 12,000 feet in the sky, fuck it… I’m last.  Again, the group are super, duper nice and nobody cares or judges.  Its all good. 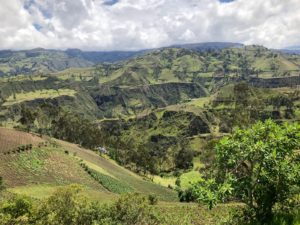 I did hit a patch of sand on the ride and that gave me a dose of reality because my back end slipped out and I think it was the ABS that save it, but I woke up after that one.  When riding in the US or Europe, safety is considered the first and most important consideration in designing a highway or road or mountain pass — anywhere.  Curves are consistent and at safe angles and designed for safe speeds.  In South America, its the opposite, the design of a road is based on the least path to get to the top.  That means some of the curves are real tight, even if I slow down to 15mph, they then turn 180 degrees and go straight up and that move is hard to keep the motorcycle stable.  In the end, its a lesson to learn or not, but in the mean time I have to learn and am in a good place plus I get some serious scenery and interesting people.  I need not say it again, but the mountains are real amazing and our cutting through these passes are what a motorcyclist dreams — especially those coming from flat and straight Florida. 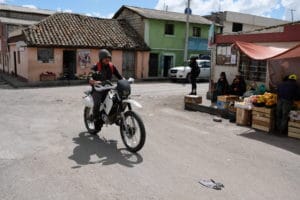 We stopped in a village along the way and it was real rural Ecuador.  The people are small — average there was well under 5 feet and they are very dark skinned like an original native Indian.  Crazy enough, I found a bakery that a couple of kids, no more than 6 and 8 year olds were putting pastries in the oven and filling an order for a local.  But the kicker was the pastries were out of this world fantastic — I bought two small bite sized blasts of happiness.  20 varieties of different and very professionally made —  and all to serve a town of maybe 1,000 people and that is pushing it — not even in the middle of the earth nobody will ever find.

We finally got to the Princesa Hotel in Quilotoa Lake.  We parked our bikes and almost everyone in the town came over to take 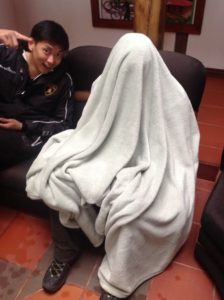 pictures of our motorcycles.   As usual, these towns do not see 7 motorcycles as large and equipped as ours.  Its fun when that happens — usually on a daily basis.

We had lunch at the restaurant next door while we were waiting for the rooms to be ready.  For $25, we had five full-on meals, soup, coffee, beer and whatever.  The chicken Soup had almost a full breast in it and my beans, corn and home made cheese were amazing.  The corn kernels were so big and starchy that I could only muster a few bites, but its simple food and hearty.  That said, Will and Manfred had a full fish platter and others had beef or whatever along with the soup.  All were great and cost almost nothing.  I wonder if that very, very and did I say… annoying Rachael Rey would ever come to Quilotoa Lake for her stupid $40 a day meal — how about 5 eat for $25.

We are at an unbelievable 12,726 feet to sleep and hang.  Now if you’ve ever skied at altitude in say Vale, Colorado, you would know that the base is at 8,120 feet and that is where the hotels reside.  The peak of Vale is 11,570.  We are sleeping at 1,000 feet higher than the peak of Vale.  I do feel altitude sickness right now and while typing, the weather is cold rain which started an hour after we got here — and to boot, its now about 0 degrees Celsius or 32 degrees F.  I’m in my room and I have no lights, no power, no hot water and no heat.  I’m wearing a marino wool hat and a neck warmer along with 2 shirts and wool socks.  I can’t shower here because I have limits — its so fucking cold and the thought of taking a mega cold shower and getting out into a mega cold room just sucks.  We did have power for an hour or so but it died again.   Not sure about sleeping but I have a blanket so what else do you need?  A bed, deck out in full-on wool clothing, a hat and a blanket.  Tomorrow we are going down into the valley and the temperature will rise.  Thats me under the blanket — freezing.

Still, everyone is in good spirits and laughing a lot about this horrible surroundings and situation.  Nobody really cares, but its pretty bad — probably as bad as I though it would get.

Possible field trip tomorrow thinking ahead — is a visit to a cocoa plantation when we get to the bottom.  Marc is feeling the pressure and brought up that he will look for a plantation.  Good, I’ll keep beating it into his head — Field Trip, Field Trip, Field Trip.  I’ve been know to be a bug and why stop now.  I dont really know, but I think Ecuador is contrasted by the low lands and warm weather — enough to be one of the largest producers of cocoa and coffee.  On the other end, the one I have seen most is the high Andes lands where its colder of just plain cold at high altitudes.  Equally interesting is that the country has no winter or summer since it is in the middle of the earth.  One season.

Going outside into this town of 10 shops seems futile.  I tried before and I got a soaker and came back to the hostel/hotel and I was so cold that it was painful.

Thats it.  We are all meeting for dinner at 7 and then back to my room.   I need to go back under the covers.