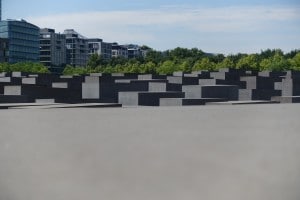 Nie Vergessen or, “Never Forget”.  I think this headline for this post says it all.

So it would be unconscionable not to share the feeling I had when visiting the Memorial to the Murdered Jews of Europe in Berlin.  Now I am not one to have a religious overtone.  I am non-secular by in large.  But with that said, I have been to 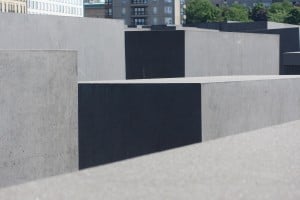 quite a few Jewish Holocaust memorial sites in my day.  Certainly they are always built to create a high shock value and a personal experience.

I will say that when visiting Prague last year, I had a heavy heart visiting the Jewish district synagogue and cemetery which included a holocaust memorial with all the names of the Czech Jews killed by the hands of the Germans on a giant wall covering multiple rooms — Just Heartbreaking.

But that is nothing compared to this unique memorial in Berlin.  It took the German government until 2004 to erect this very large monument sculpture landscape, better late than never I suppose, however they did an incredibly outstanding job.  This site is absolutely moving and breathtaking.  Anyone who visits this monument gets the point.  And if you don’t — well, you probably have Vulcan blood.

First and foremost, the location of this 4.7 acre site is immediately next to the United States Embassy, the German Parliament buildings and the most famous Brandenburg Gate.  Second, the land surveyed to construct the 2,711 concrete and very large slabs representing various sized grave tombs took 2 years to construct and is perfect.  The tombs are randomly located and sized as well as plumbed in uneven land.  The idea is the leave the visitor in a confused state.  Nothing is even or organized. 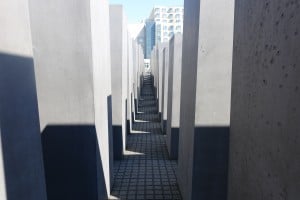 Always leaving the visitor wondering how on earth this could ever happen?  Well, it did.  To that end, people must always remember this event, along with the Rwanda genocide and other peoples plights, to ensure it can’t happen again.

Below the monument is a very large tourist cavern which shares the story of the holocaust complete with letters from the dead and the entire European story and how it relates to the horrible condition of the Jewish people living in Europe from 1938 through to 1945.

Ok, there I did it.  I generally don’t want to spend boring time giving site reviews about monuments, buildings or else.  Nobody cares.   This one, although not the biggest in Berlin relating to the holocaust  is just that good and important.