No kidding, its mine.  And yes, that’s Paula carrying it.   We’re in the Lake Tarawera Forest.

If you look on the other picture here on the left, I’m wearing a petite 15 liter pack.  So how does this happen?  Ok so I will work the day activities backwards.  Our last ambitious activity was to hike 5 hours along side this absolutely picturesque lake surrounded by rolling hills which are probably 2,000 ft high.  Not sure of the definition for a mountain, but this was a tweener — in between mountain and a large hill side.  Constant up and down hill hiking.  Now, when I say 5 hours, I mean 5 hours.  No messing around.  No long breaks.  No stopping, just full on hike up and down.  Serious business.  After all, I’m with a Marine Sargent.

Well, for some crazy reason, I though that I could pack up my 25 liter bag with a large Mirrorless camera, huge lens, binoculars, and on and on and on.  I was somewhat confused or stupid.  My bag probably weighed 20-25 lbs.  It was as heavier than my dog Woody, plus some.  I thought that I would have some fun.  Well, the first couple of hours kicked my ass!  Of course Paula and Kath are trotting up the inclines, gliding down the hills and I am sweating, pushing and breathing super heavy.  But I honestly did not complain and only really stopped a couple of times…. But I was thinking….

Look at Paula — She is like a mountain goat (as Kath called her) and she never looks back to see if I’m ok.  Yah, the sorrow kicked 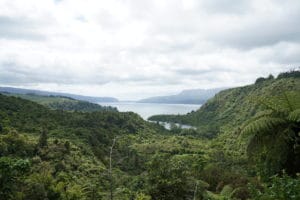 in, I wont lie.  I felt like the two adventurers ahead of me were on their own when traversing these stupid hills — some long, never ending and steep.  I’m falling behind but I was convinced that I would not complain, suck it up and move forward.  Oorah!  Yes Sargent Paula.  Anyway — to the Sargent, this is just another outing where those who drop, slow down or complain are weak and humiliating.  Push, push, push and don’t be a man-bitch.  Ok, so I push on.  After all, this is work and we might protect our house one day.

After a couple of hours, I guess I could not hide the fact that my body was dripping of sweat.  We stopped for a small break and my darling Sargent asked if we should switch bags.  Hahaha, Noooo.  After all, who is the strapping man here?  I have been working out on the elliptical for a month now — I’m strong!  Well, it didn’t take much more coaxing to convince me to switch bags.  Look, the Sargent loves the extra weight, its a better workout.  You sure My Dear, I asked?  I am happy to keep kicking my ass down the path — but I want to make you happy so sure, you can take my bag.  Enjoy.

The happy ending of this story is that I did breeze through the remaining 3 hours without any issue.  Paula was just a bit slower but still, never a peep from her other than the fact that she wanted to know how much the bag weighed and asked to take a picture of the man-bitch with the small bag.  Ok, I deserve it, fine.

It was a challenging hike and real nice.  Its almost like a rain forest in a sub tropical environment but, a big but, it is cool and in the 50’s-60’s.  Super nice for hiking but the weather does not match the scenery.  Ah, New Zealand.  Nice.

Lets now start at the beginning of the day:

Well, today we woke up and left the Treetops Ranch in Rotorua region which was just amazing.  One of those out of the way 5-star lodges that you cant imagine how they exist with such luxury and scale and size.  One thing to note is that people come to that lodge to hunt for deer.  Apparently you pay $6,000 USD for a large buck and get this, you can pay $80,000 USD for a diamond buck — super rare and huge I guess.  Crazy idea to come and shoot deer in New Zealand, but its big business.  One unique fact is that their are no limits to how many deer you can shoot in this country.  You can shoot one or one hundred — no limitations.  Further, no seasonal limits either.  So its a deer hunting wonderland here.  Anyway, we left the lodge along with Kath who picked us up.  We then headed out to the Rotorua Hot Springs, yes, in Rotorua. 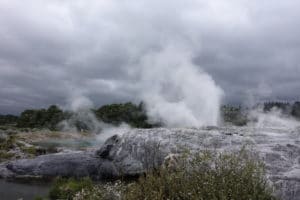 The Hot Springs are basically a geothermal geyser which erupts once per hour for various amount of time.  The area is owned by 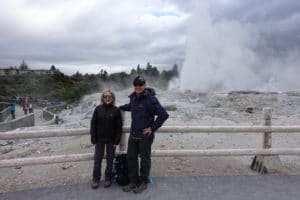 the Maori People of New Zealand which are the equivalent to the native people of Canada.  They have the same stupid thing going here as in Canada where they have rights to steal back properly and land from the Europeans who settled here.  Lots of native land here.  So thats a long way of saying the geysers and hot springs are on their lands.  One interesting fact is that in the North Island at least (not sure about south), 20% of all electricity is generated from these geothermal hot springs and its growing.  I had no idea. 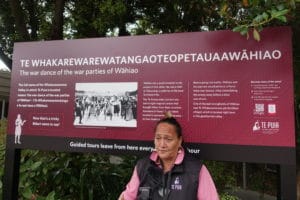 We did that thing which is kind of interesting, but not too much.  I like cultural stuff, but limited I guess.  I really wanted to head out hiking — which we did by 11:00am or so.  We got to the lake region an hour or so after.

After our hike, we drove another couple of hours to our next accommodation, The Poronui Lodge.  Again, another super kool lodge — very rustic, but food and atmosphere is a 9/10.  Were literally surrounded by hills, green trees, green grass and more green everything.  Lots of animals; cows, deer and stuff.  Had a late dinner.  Met some folks from Arizona — father and son — who were great, some dick and his poofy wife from San Francisco — yuck.  All came for fly fishing for trout which is I guess renowned here.