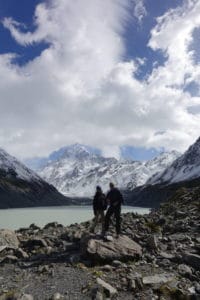 Mount Cook is the largest mountain in New Zealand at 12,217 ft which is not the biggest in the world — but its base is about 2,460 ft — so a good 10,000 ft elevation from base.  The token picture of Paula and I in the foreground of Mt Cook [with the clouds carved out for a second] to the left.

Not sure where to start, but we just went up the biggest and highest hike of our trip yet — Mt Cook range of mountains which are pretty dense and plentiful.  In fact, the featured image is taken from the top of the first ridge and if you look at the base of the mountain in the picture, that is where we started.  There is kind of a round circular road in the bottom of this picture and that’s where we parked.  Even when looking down in person, the distance down was daunting.  Suffice it to say — it was a tall task to hike up to hundreds of tight steps and steep incline.  My legs were fried when we got to the top.

So the day started by Paula, Grum and I leaving the super historical Hermitage hotel in Mount 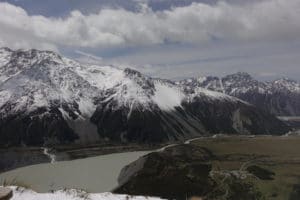 Cook.  It has so much history that it was one of the first mountains that Sir Edmond Hilary climbed when he was in his 20’s.  The hotel has been there since the mid 1800’s and is now in its 3rd iteration — mostly slimy Asian visitors on volumes of bus tours who are out for a walk in the flowers — wearing stupid hats, inappropriate clothing and clogging the most disgusting buffet room with their aggressive moves, pushing, burps, farts, picking teeth at table — need I add more?  Its actually kind of interesting in that I think this must be our first tourist stop in our first few weeks because we really have not seen the Asians on our entire trip.

The first 2 hour walk — not exactly a hike — was seriously picturesque and full of Asian groups, young adults, families and the like.  The weather was a bit cool in the mid-40’s I would guess — but the typical windy periods add to chill.  Very nice walk.  Graham of course wearing his shorts and long wool socks.  Nice.  We walked through a very defined boardwalk mostly and it took us through marches, rocky sections, a nice suspension bridge….  You get it — a nice national park walk terminating at a scenic Kodak moment picture area of Mt Cook. 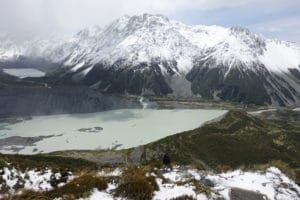 We next went on to the hike that Graham had discussed with us as tentative the day prior because of the height and was weather dependent.  Snow had a accumulated on the mid way of the mountain we were going to tackle as well as avalanches had been active — in fact we learned when we got to the base that the day prior had an avalanche and fresh snow which stranded some people on top.  Of course the wind plays a huge role in the safety too.

So the Sargent is revved up to go.  I am willing and love the concept, but I’ve learned that although I would say that I’m a 7.5/10 for speed and competency to hike these inclines with time and a few sections where I just need to catch my breath and give my legs a break, the Marine Sargent is of course a 10.  And when I say 10, no shit, the Sargent is a 10.  She has now dusted 2 of our current guides; Kath and Grum — they need brakes to catch their wind on occasion, but the Delta Force Marine Sargent never stops.  They have both looked at her as some crazy phenomenon.  Paula said to me that she does not know why Grum has to stop?  Maybe because he is just human? I would add.  This guy just finished 2.5 years of travel on a bicycle — up and down mountains of Tebet and Nepal — and he needs breaks when hiking these long vertical outings — Paula never, ever stops for a break.  She is a freak of nature.

We start the hike and I can see the big picture after the first hour — this is going to be straight up.  Not a lot of breaks where it flattens out and you can kind of catch up with your bodies need for some fresh oxygen — nope, just up and up and up.  Now, while their were 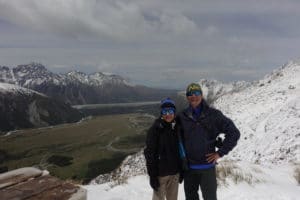 hundreds of people taking the 2 hour walk to the lake where Mt Cook lies and the physical ability required to do the beautiful walk is that you can’t weigh over 275 lbs I guess — on this hike, we seriously weeded out the common folk to less than 50 people in the entire 4 hour hike.   And many of the 50 were local Kiwi’s while many were also tourists.  I did see some idiot Americans who wore running shoes and I really wish I could stand in one spot over their shoulder to get a great POV and watch them struggle in their equipment.  Dumb cant be a big enough descriptive word from those nuts.

I would say at half way a few things changed.  First, I was considering how far I have come with my physical abilities from even the start of this tour — hiking hours and hours daily in all sorts of terrains and second, the snow had started to accumulate on this trail as we got higher which meant it was slippery and sketchy.  In fact, it started to get a bit dangerous and I slowed down to make sure that each step was planted. 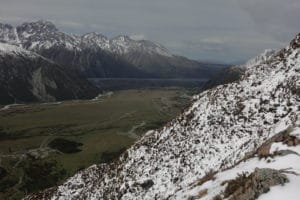 It took a couple of hours and we finally got to the top of the first ridge which was as far as we could safely go.  The Sargent kept asking questions about going another 2 or 3 hours up and Graham kept saying that its just not safe.  Already we were in a level of packed snow.  The people heading up were going to hike to a hut, up top a few thousand feet which in my mind is which separates the safe from the stupid or very well equipped and skilled.  Watching the hikers who left us to go up with their crimp-ons, poles and I suspect much deeper knowledge of mountaineering, I was super happy to stop here.  For Paula, the hike was not enough.  For me, it was a huge and massive accomplishment.  When I did get a chance to cool down, I did get some pictures of this pretty high scene surrounded by mountains and a nice valley.

Heading down, as always, is sometimes a scarier time than going up.  Twice on the trek down, Graham lost his footing and bumped into me.  I didn’t like that notion to be honest, but I was happy to help I guess as long as he didn’t fall on me too hard and take me out.  Paula was long gone down.  Each step for me took super concentration and thoughtful footing which also included finding a rock or something to hold on to.  Graham, I noticed was not any faster.  Generally I’m not a fan of heights anyway but add slippery snow and its just a pain in the ass.

In the end when we made our way down, I felt a sense of deep happiness that I had done something not natural for my soul.  Felt good.  The Sargent needed more activity for the day since we only walked/hiked 6 hours, but I was content.

Check out the images.  None have been worked and it was a very dull/cloudy day, but hopefully you can see the beauty and diversity of New Zealand.