Yah, yah, of course I could have chosen a beautiful range of mountains for the main picture for today, but what the heck. 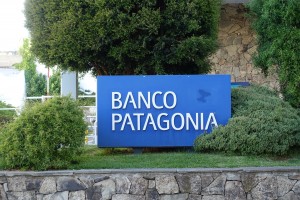 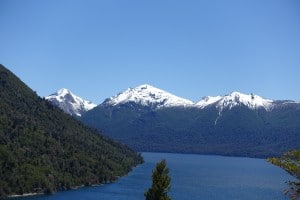 The place Patagonia for me always conjured an image of great white mountains and a hinterland in the furthest southern range of the earth — connected to the Antarctic.  That is not far from the truth except, their are some factual differences.

Patagonia is vast.  I guess the best way to think of it is similar to Alaska — except on the other side of the earth.  Sure, its shaped different but we are now in Northern Patagonia (so still warmer), a place called Llao Llao, Bariloche, Argentina.  It’s the last resort area we will see before heading down south to our next stop where humans will become a rarer sight.  On the left you see a picture with your typical snow capped mountain ranges which you can find anywhere in the world — although rarely in the summer — these ranges border onto Chile.  We are close to the west coast and Pacific side of Patagonia.  Remember, Patagonia is surrounded by the waters of both the Atlantic on the East and the Pacific on the West in Chile.  With that said, much of Patagonia is flat hinterland — cold and windy.

You can’t see the rage behind where I took the picture above, but it features a close mountain that is over 21,000 feet high.  Think 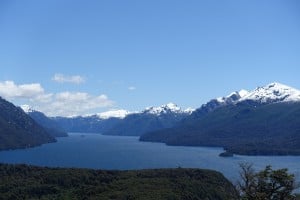 of it this way… The tallest mountain in North America is found in Alaska called Denali and that is just over 20,000 feet high.  The mountains in Patagonia are vast and large.

Temperature here in late November is about mid to high 50’s during the day and 30’s at night.  So that’s not bad.  Late November in the southern hemisphere is akin to late May in the northern hemisphere.  In less than a month, it will be the same as June or summer solstice here.  Another huge issue is the wind-chill which kicks up, depending on the side of the mountain.  I’m told that all bets are off when the winds pick up — I had a taste of that and its not pretty.

Bariloche is a very simple ski resort town; hiking and mountaineering is huge, climbing, even bird and condor watching.   The area has a huge lake with fiords traversing throughout where people kayak and has a few older boats (although I had not seen anyone kayak yet and only one boat moving) — in some ways similar to a western American ski village except for one main thing and lots of smaller differences.  The first difference is something that the USA or Canada will 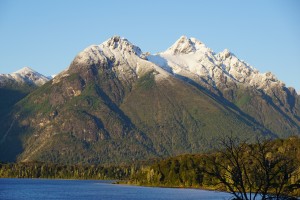 never see agin.  Almost 100% pollution free.  Yes, One Hundred percent.  Imagine a huge lake, 130 miles long and you can drink out of it safely.  Case closed.  Water comes from glaciers.  The air is pure and you actually feel that in your lungs.   No factories or industry within 1,000 miles of this area.  The other differences are mainly in the economy and lifestyle.  While Bariloche is a wealthy village by Argentine standards since it has summer homes for the northern Argentines, its not wealthy.  In fact, tons of young kids hanging out in the small town wasting time surrounded by lots of closed and abandoned shops.  Their certainly are two active tourist streets, but eh.

Paula and I went hiking today.  Great hikes.  Just great.  Our guide, J.J. was born in Patagonia and he leaps like a mountain goat.  What can I say?  Views were great.  Air was great.  Temperate was very good in the 50’s however when the wind chimes, as I said, the wind chill drops to real cold.  Anyway, if you like hiking, today was a 10. 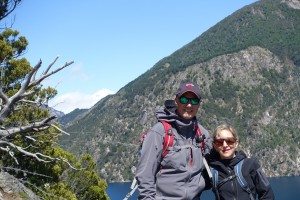 Of course you have to picture this:  At one point, we are going up a trail which is pretty vertical for about 45 minutes.  Each time we turn, I see another path which is vertical.  This goes on what seems a real long time.  I’m trailing J.J., the mountain goat and behind just a half step is Paula, the Marine Sargent who never loses fuel and thinks its fun to never stop.  Following in last place is Private Phil at boot camp.  I do not want to stop the momentum, but after 35 minutes, I’m sweating hard.  You know when you hear your own breathing?  That was me.  J.J. says, if you need to stop, just say something without turning his head to see his team behind him.  I don’t want to be a spoil sport and these two lunatics seem to be having fun trotting up this vertical.  If you read my post when Paula and I were in Switzerland going up the near 45% grade hill for a few hours where others took the train to get to the peak, you’ll get the idea on how the Sargent loves to exercise. She does not understand that the reason people take the train is because the vertical hike is too hard for the masses. Anyway, finally, I peeped and a little embarrassed….  “we can stop now”.  Disappointed the two in front stop.  After a short breath — we troop on.  Bottom line, hiking is not hiking.  I was put on the wrong team.  But I work hard to put on a good face and love it anyway.  Really love it when its done.

We did one thing in which I almost shit-my-pants.  Yesterday, J.J. asked if we were up to Rappelling.  I thought that meant the same as a Zip-Line ride.  “Sure”, I said.  Paula asked what that was?  I told her the same as we did in Costa Rica — it was fun. 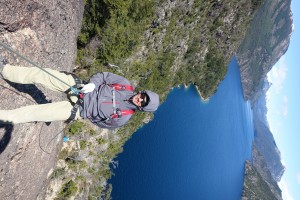 Anyway, I was wrong.  Even typing now, my hands are sweating.  So were hiking and 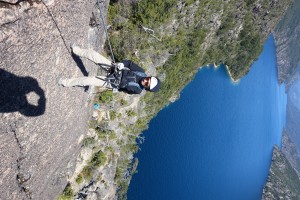 J.J. has a huge Mountain Hardware backpack on him.  I ask him if he brings his home with him in the bag?  He said, no, its the gear for Rappelling.  Huh?  Okeedokee.  We continue…

What I didn’t know was that we were going to stop at a cliff, at least 2,000 feet above the lake and rocks below.  Why are we stopping I asked.  You can see where this is going…  He says, we are going to rappel from here.  Still no clue what rappelling is, but I know one thing, I’m scared of heights — so is Paula.  J.J. brings out all the gear — ropes, harnesses, helmets, metal things that hold ropes to body and rocks.  Anyway, fucking shitting my pants, he sets up, were dress in harness and gives us a quick lesson on how to stand against the mountain face going down.  By the way — my hands now typing are drenched.  I said that I would go first to get it out of the way.  Just shitting, I did it.  I survived.  Paula followed after.  We lived to tell about it. 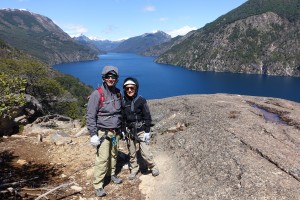 Paula said at dinner that she was really happy she did it — fought our natural fears.  That said, I will never, ever Rappel again.

Nope, once is enough.