Coming back to Amarillo, Texas, their are really two things that I know keep the tourists happy.  The first is a visit to the Cadillac Ranch and the second is dinner at The BIG TEXAN on famed Route 66 — home of the Free 72 oz Steak.  Otherwise, Amarillo feels like an authentic old Texan town — it is the real deal without the glitz. 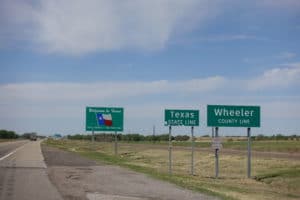 I left Oklahoma City around 9am and had a hard ride because of the high winds trying to kill me.  The ride was about 4.5 hours and the weather was a bit grey until I got into the Texas boarder, or so it seemed.  Once in Texas, the temperature bumped up to a high of 88 degrees which was nice with the breeze and the skies became a bright blue.  So rolling into the hotel around 2pm, I had some things I wanted to take care of — more about that tomorrow.

I also made sure to call for the Big Texan limo to pick me up at 5:30pm. 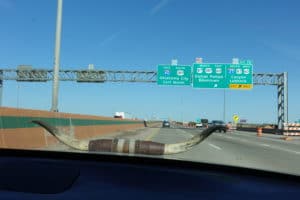 I wanted to beat the tourist traffic which comes a bit later at the restaurant and creates a long wait for a seat.   The limo service is free and courtesy of the Big Texan which operates a fleet of 6 or 7 — 1970’s Cadillac limo’s used to shuttle tourists to and from the hotel, RV site or wherever.  Now these limo’s are beaten up and old.  Each has horns mounted on the front hood along with tons of advertising all around the limo exterior.  My driver was just so funny and interesting — an old and 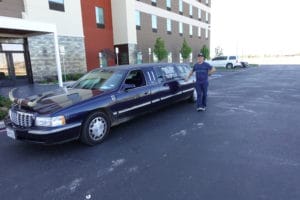 leathery skinned, Texan dude whom I only understood every 3rd or 4th sentence which he spouted.  I asked plenty of times for him to repeat himself.  He had a one track mind — tons and tons of stories about women, gays and sex.  He liked the women and sex but did not like gays and Mexicans, 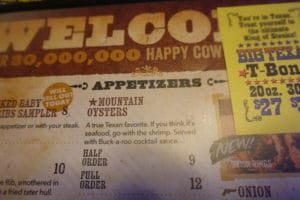 One of my objectives for today was to try the Mountain Oysters — a specialty.  I’m guessing that some are not acquainted with these type of land 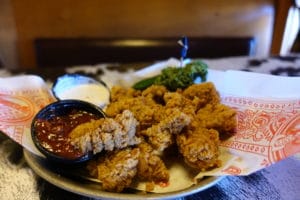 Oysters.  Well, let’s just say that every cow has two of them.  Ok, otherwise known as Cow’s Nuts.  It’s now time for me to pull up my big-boy shorts and take a 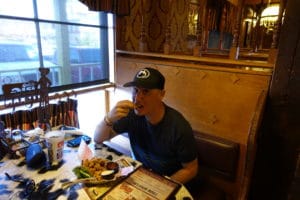 bite into one of those delish and organy heavily breaded and fried meat balls — and so I did.  I had one bite, and it was not bad.  Then a second piece and uggg, yes, it was organy, chewy and a bit fatty.  Check that off the list of foods I wont be eating again — but hooray, I tried it. 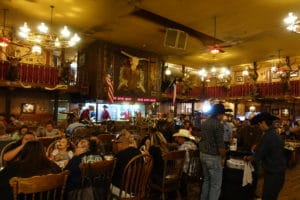 Anyway, what makes The Big Texan so special is that its one of those places that you can imagine has grown over the years to become massive which just is always busy with people passing through town on one of the busiest highways in America.  The schtick is if you eat a 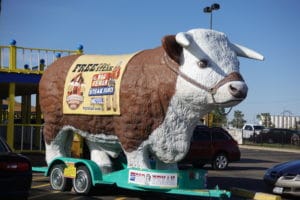 72 oz steak, full meal deal within 60 minutes, you get the dinner Free.  Last year, a young Australian who was touring the US tried the snatch the free meal deal while I was there — it was lots of fun.  They perch the candidate up on a table above the crowd and everyone watches the show.  BTW:  The Australian was beaten.  He ended up paying only 50% of the cost for being a good sport.