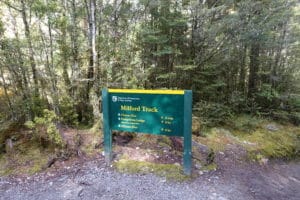 You know how it goes, sometimes you book a sightseeing side trip on a holiday and you get second thoughts just before you go. Well, that exactly happened with Paula and I. Not only second guessed but third and fourth and not to mention we can probably double that because Paula was yapping in my ear at each turn. But I will go right to the punch line – Paula and I loved this trek to Milford Sound. Happy we went indeed.

The Milford Sound Track is supposed to be one of the most beautiful and great walks/hikes anywhere. I don’t know about that, but it’s a 5-day trek through the southwest Fiordland area in the South Island of New Zealand. Confused? It doesn’t matter, just consider it a super nice area with fiords leading to the Tasman Sea and about a million water falls, huge-huge-huge cliffs everywhere spewing streams of never ending water, more streams that you can count and on and on and on. Oh, it’s also a massive rain forest.   Sure, a rain forest… like big deal…

Well consider this; it rains almost 300 days per year in the Fiordland. More so, it rains lots – how about up to 15 miters a year or said another way, it rains about 45 feet of rain per year everywhere in this huge area surrounded by waterfalls, streams, and …. Now you get it? 45 Feet of Rain Each Year! 45 Feet! Fucking Nuts.

I’ll make this story kind of fast. We met our group at the Ultimate Hiking office in downtown Queensland – the city of about 300,000 in New Zealand where you hear about all of the bungee jumping and action sports filled with 20-something’s everywhere. I can only equate it to a southern 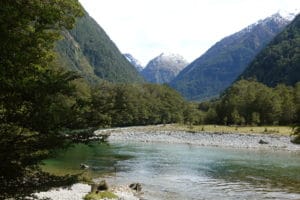 hemisphere version of Whistler in British Columbia, Canada. Its just a big dump of university kids or others either participating or manning water sports on a huge clean lake, sky diving, mountain biking, trekking or just bumming around. In winter it’s all about skiing in the very large mountains surrounding the city – many snow capped even in the summer.

Back to Ultimate Hiking, they have the rights to the Milford, Routeburn and Kepler tracks from the New Zealand government. And boy, they do it right. Everything in my opinion was perfect – just perfect.   For some reason the trek only can accommodate groups up to 50 persons per day and individuals on their own trekking in small and simple huts of up to just 40 – which has to be reserved a year in advance — So because of the facilities along the trek are super limited and also because the New Zealand governments conservation policies are super stringent, not many travel the path. Enough said, this trip is special.

So going on the multi-day Milford Track is really 4 days of hiking and 5 days without Internet in the deep off-grid part of the Fiordland’s. Hiking is pretty basic with only 1 day meaning anything more than eh! Mostly anyone with any athleticism can do it – we had a couple of very in-excellent-condition 70 year olds – one from New York and one from Japan. The rest were in there 40’s and 50’s I would guess. We had 4 guides.   Don’t get me wrong, if your not used to hiking, you’re going to have issues. Nobody complained at all which was shocking given the long days – happy about that. 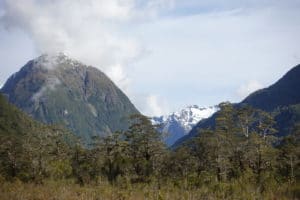 I think everyone – or almost everyone on this trip was active and certainly was proficient in hiking and in decent condition and no kidding, Paula the best condition as usual. I would give the difficulty a 5/10 compared with the hikes Paula and I have done on this trip. Many of the other hikes left me burnt out with exhaustion by the time we went to bed – but they were great and pretty adventurous.  I really pushed myself on this trip and would say that I’m in pretty good condition. The 4 days here were basically 5-8 hours of hiking daily. On the 3rd day, it took some good effort and concentration since the path took us about 2,000 feet vertical which was not too bad and about 3,500 feet in decent but it was very tight steps of loose rocks and streams down which is hard on the knees — some needed all 8 hours to complete. That night, we all were pretty exhausted.

Sleeping conditions were very basic and all electricity was cut off at 10:00pm nightly because the camps were on generator. Paula and I did get a box of a private room with ensuite, but many in the group shared with 5 others in one room and 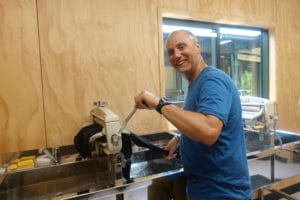 shared a common shower. Nobody cared since it was really about the experience and scenery and just getting outdoors and using your legs, heart pumping and staying active in one of the most beautiful scenic treks on earth.  Oh, forgot to mention, the laundry service is ala early 1900’s — Soap, water and hand cranked dryers.  Check out picture on the right…

Food was excellent but not in a 5-star way. Excellent in a basic and very healthy way — I liked it lots. Nothing fancy at all and that is my style to be honest – simple sandwiches and some snacks for lunch and dinners were good for a camp situation. Breakfast was also limited to some eggs and ham and other stuff. I did try for my first time “Vegemite” – the Australian breakfast spread of champs. Every single Aussie has this super salty spread in their cupboard for breakfast. It was ok in a bad way and salty, but I can assure you – no limit on the stories about the spread and lifestyle history of this goo from my Aussie friends. I will definitely pass next time.

Anyway, the folks at Ultimate Hiking have figured all the bugs out over the years and the trek runs like clockwork.

About half the 35 participants in our group were Aussies – so lets say 16, a quarter were from Japan – 9 and seven Kiwi’s. The remainder of the 5 were American – not many of us. If you know me – I’m not into big groups and being told what to do but this worked out much, much better 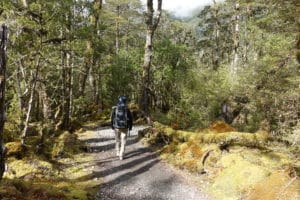 than I had thought. Most were interesting and real nice. The staff was willing to bend over backwards to make the group happy and they were very professional and clearly loved the outdoors and hiking.

Picking one couple would be hard but I did like these two dairy farmers from Australia – so nice. They looked on the outside like a couple who you just don’t want to hang around or know because the woman was round like a ball and kind of short and the guy was super tall, I would guess 6’7”, lanky in his legs but upper body had some girth and huge feet, ugg, and I have to add some messy grayish hair — and both in their late 50’s. But they ended up being real funny, well traveled and just had a nice and easy going demeanor.   Clearly the round lady farmer does some walking on the farm because she was not last person in at the end of the day by any means – she just eats too much I suppose – sorry. Anyway, when I first met them at dinner, the lady asked me where I came from, the normal opening question. “Boca Raton, Florida” I said expecting a blank stare. But she said “Del Boca Vista”? Referring to the infamous Seinfeld episode. I thought that was funny. They both love Seinfeld – so I loved them. They have 4,000 dairy cattle in 2 farms I think. A few milking machines and some laughs and interesting information about dairy farming in a light hearted way. If your interested – not that you are – but where do the old 8 year old dairy cows go after they stop milking? Well, of course to McDonalds. It appears that McDonalds likes the old has-been cows for their luscious burger patties. Who cares right? Apparently its leaner meat – yah right. Let McDonalds save a few bucks by buying the old shit. 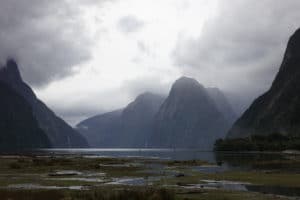 Lots of others on the trip who we chatted with were nice enough and it was all good. No real dicks in the group. Had a very relaxing time but – I would say the last day it was dragging and I was super-happy to peel. Enough of the chit-chat — Time to go and fast. Laughs were drying up and although we all had a satisfying face on, everyone was ready to hit the road to our next destination.

After a hour and half tour of the Fiordland’s by boat, we got on a bus and traveled the 4 hours back to the beginning.

When we finally got back to Queenstown after being trapped on a boat and bus for 6 hours, we had a car pick us up to take us back to Azur – our super duper luxurious and nice lodge. Sooo comfy. I was fine with the trekking huts but I have to be honest – the lodge was a few notches better.

One day left before we go home to the States.