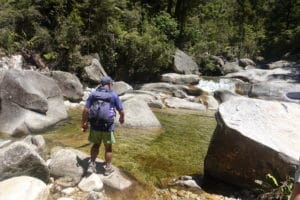 Graham [aka “Grum”] Frith.  Don’t even know where to start. How ‘bout a 62 year old fella who has just returned 2 months ago from a 2 and one-half year bike ride around the world. No kidding, this guy Graham rode a bicycle and a small trailer around the world and has a million stories in great detail. I’m actually in heaven listening to his experiences.  Of course the prominent Kiwi accent doesn’t hurt — it adds to the fun.

Graham is a one of a kind. He has always been the outdoors type. His first love is mountain biking and he is an encyclopedia around that topic – but not in an obnoxious way.   He just loves bike riding of all types. He also loves hiking, kayaking, camping and anything outside.  Paula and I have had tons of guides over the years from Patagonia to Peru but this dude has a super easy going, competent and fun side with the added feature of having a million stories of his life experiences in the strangest places which are second to none.  Especially for someone like me who just needs to be stoked to do the same — get on my motorcycle somewhere off the grid or travel with Paula to a super cool place.

But it gets even more interesting. With his first wife, Graham took his two kids and became gypsy’s for over 4 years in Europe. No fixed 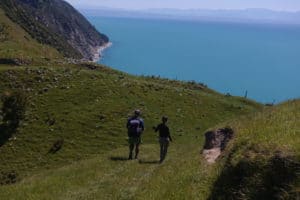 home and no fixed job just out for life experiences, hiking, nature and some city living. But when you listen to Graham and his stories, it totally makes sense – to him. He just lives that way. His kids did not have a television until they were 8 years old. So what, he is super happy. Or at least was happy until he divorced his wife.

That didn’t stop Graham. He met his second wife who seems like an equal match in terms of adventure.   He and she went to Nepal to hang out for 6 months when they started dating. They got jobs there teaching first aid or other stuff and lived off their daily schemes.  I think Graham was about 45 years old at that time. Since then, he has been married for the past 16 years to the same lady who is now an equivalent to a coast guard helicopter staffer who lifts people in trouble with the wench and basket — apparently she is super strong and passed the manly dominated profession. Both Graham and his wife are free-living type people. She met Graham at four locations around the globe where she decided would be fun like Nepal again and Utah — and rode her bike along with him — a total of 6 months of co-riding — along his 2.5-year trip.

Oh, time means nothing to Graham but he is somehow responsible.  He never wears a watch — not even when he traveled the world.  If he was hungry, he ate.  If he was tired, he pitched a tent anywhere.  What fucking manic lives like that?  Graham.  He just knew he needed to travel 8-10 hours and 100 miles per day.  He did the entire trip with 2 pair of pants, 2 shorts, 2 shirts, 2 socks and a wool jacket he used on special occasions.   That’s it for clothing.   He washed once or twice per week but he said that he rinsed his cloths often.  In fact, he lost 40 pounds during his trip — not hard to wonder why.

He lived in Iran for a month and stayed with various families he met along the way. Always with stories about living with friends he knows everywhere and friends he made along the way. Often people see him on the road and invite him for some food, shower and sleep. He went to Uzbekistan, Azerbaijan and all the ex-Russian countries that end with ijan and istan and all those fucking similar countries with stupid endings, India, Nepal, Turkey, Tebet, Europe and the USA for 6 months.  I am sure that I’m missing some places.

Well, when hiking, Graham is great. He knows all the off-the-beaten-path choices with just killer scenery and terrain — much of it, paula and I have never seen before in New Zealand or elsewhere.  He is fun and not serious. Opposite to Kath who with her annoying Oregonian hillbilly and unbearable flower and socially conscious attitude — yuck.   No lectures from Graham although I’m pretty sure the end result is the same.

I wont say much more but Graham has motivated me to ride my bike too. I want to go somewhere crazy and will work to make that happen.  Also, I think I have Paula convinced to go to Nepal in next couple of years. Goal is to hike to base camp of Everest. I plan to make that happen.