Feature image is of at least 30 switchbacks — on the ride down the really steep hill called the Los Caracoles Pass — just after crossing the Chile border from Argentina.  Most of the turns had no rails for protection so it was a bit daunting — but should have been fun.

So let’s start with yesterday and lead to today’s adventures.  Riding from San Juan, Argentina to Mendoza, the wine region for Argentina was an optional extended riding day — which meant that whoever wanted to do the straight shot from San Juan to Mendoza city could do so and it would take about 3.5 hours and get 3 hours of relaxing time in Mendoza.  Whoever wanted to take a diversion of about an extra 180km ride on some unknown gravel and dirt roads could do that too.  Well, I’m bushed and could use the extra time to walk around Mendoza so I along with Will and Bernd decided to take the straight shot.  Manfred, Martin, Bert and the two leads went on the extra stupid ride.  Like why?  If you have to go the extra mile to get from A to B and need to take a hard gravel route, sure, no choice, but to get extra beaten up just for fun — count me out.  The right decision. 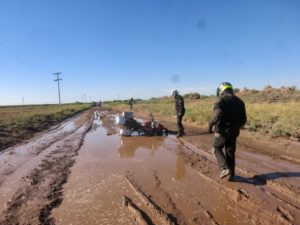 Seems that the route the guys took was not charted and they went about 140km in pure hell of soft sand and a hard rocky river bed which made them buckle back and find an alternative route to Mendoza — not before they all dropped their bikes and poor Bert in a large mud puddle, submerging his bike and all of Bert.  Sucks.  Manfred and all others got messed up too.  Martin got his bike stuck in the sand and it sank the wheels.  Took 4 of them to pull it out.  Jerks for taking that uncharted route.  Meanwhile, Will, Bernd and I got to the not-so-nice and not as promising town of Mendoza and just walked the town.  It was almost how I would envision a real poor Russian village or city.  Suckers who go to Mendoza on a wine pilgrimage will find nothing.  Sure, they make lots of wine and have 100’s of vineyards — and there are about 100km of wine groves and I might add olive trees lining our route, but Will is so picky about what he will take as a tour — has to be the best winery in region or nothing, we ended up with no tour of 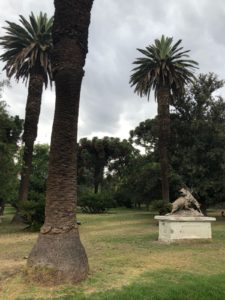 any winery since the town is so South American — everything is closed during siesta hours  — so we just went for a long walk in the town around a dirty pond in the dirty and trashed city park.  That was fine too.  The others met up with us at around 4:30 pm, all beaten up with only half-good stories.  I was a lot more refreshed from the long riding days prior.  Idiots. 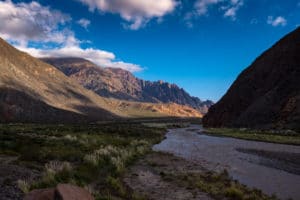 Today was our ride from Mendoza to Santiago in Chile.  I can’t tell you have excited I have been to come to Santiago.  I have heard that it is a modern city in the fucking hell-hole and mess they call South America.  I’ve really been counting days for some civilization.  Not that I’m ready to leave, I do love the adventure tons, but I need a mental break away from the shit of Peru, Columbia, Ecuador, and Argentina.  Today was my day.

The ride was 362km but we know that crossing the boarders into Chile is normally insane.  Chile is the only normal country in South America who cares about its future — and their neighboring countries hate them — but Chile makes sense to any western person.  Don’t let the scum of the rest of these countries fuck up their good thing.  We started at 8 am and the ride was 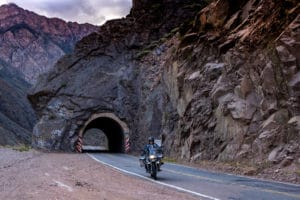 just beautiful — traversing through just epic mountains and scenic roads while in Argentina.  We all really enjoyed that.  By noon we got to the border and were going to meet up with our new group co-lead, Dominico from Edelweiss.  Sadly, Oliver is leaving us and Dominico is taking over.  I really like Oliver but he could only take off a couple of months of work — which he owns a cleaning company in Germany.  Dominico, 43 years old is a full-time guide for the past 5 years and has just arrived from 2 tours of Cuba — back to back.  Anyway, we cleared the Argentina-Chile mess in 2 hours and left on our way to Santiago by 2 pm.

While hanging around waiting for everyone to clear, Martin and Will were talking to another biker who was coming from Chile 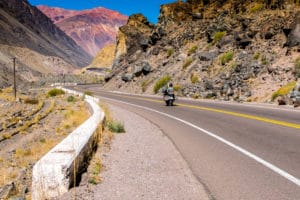 to Argentina.  I was not listening.  After which, Will and Martin said to me joking and smiling in good spirits — your going to love the ride on Chile side — gravel, oil slicks — all good fun.  These guys know that after the last day, riding on another gravel road is not something anyone is looking to do — but who cares.  Anyway, they were fucking around.

Just within an hour of the crossing, we got to to the top of a real vertical mountain with a unique way down — probably 25 switchbacks sort of organized — long rides leading into a switchback and then another ride to another and so on.  Also in the middle were stretches of carved tunnels in the mountain which could not be seen in any photos — super fun.  What I didn’t necessarily like was that most of the way was no guard rails on the hard turns so looking over was a long and bad way down. 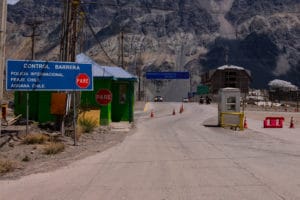 Also, there was decent traffic on this road with tons of large trucks.  Anyway, it looked interesting and another experience.

So the guys were riding a bit slower than normal and I was following the first 3 guys — not sure why but it was comfortable until overlooking the turns and seeing the huge drop down.  Still, they were a touch more aggressive and I got caught behind a large truck going into a corner switchback — I had no choice but to wait a bit.  I decided to overtake the truck on the hairpin turn while the truck struggled to make the tight turn.  I got into the other lane and — whoops!  I slid on that oil slick that Martin and Will were not really joking about — it was true.  My bike went down on the Low Side — means that the bike dropped within a nano-second on the slick over my body and started sliding towards the truck — along with me on the bottom.  We slid about 10 feet and I could see the truck getting closer and so did the driver — I was watching his eyes while I was sliding.  My bike was just shy of hitting the truck by about 3 feet.  Bike down, I was absolutely fine and not ever upset — I got up quickly but now what?  Bert and Bernd were behind me so they ran over to see if I was hurt.  I had no damage, my bike had no damage and the driver of the truck had now stopped in shock — and he could not make the turn with my bike on its side in the way of his path.  Anyway, we lifted my bike and I was on my way – I gave a thumbs up to the truck driver who could not stop staring at me — and he gave me a thumbs up.  Real strange was that I was in no shock or discomfort.  I was super worried that my tires had oil on them and I would go down again, but otherwise, I just kept going and was 100% fine.  Bert and Bernd were more upset than me — which is nuts.  Today I was super lucky. 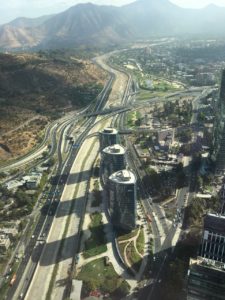 By 4:30 pm or 5 pm we got to Santiago and I was not disappointed.  It is nicer than 80% of Canadian or US cities.  Not sure how or why?  But it is super clean and very modern and very livable, surrounded by stunning mountains — with tons of young people — mostly a white European descent population and I have seen very few South American decent or Spanish looking Hispanic people in this town.  Not a racist comment — just fact.  People are dressed nicely and not shabby.  Kids wearing Vans and Ramones T’s.  Just so much life and fun.   Tons and tons of good-looking young people.  Where are the fat, overweight and disgustingly messy people and atmosphere of Hispanic South America?  No clue, but certainly the Chilean people are hard working and have an excellent government — because this country does not belong in South America at all.  Papa Johns, Dominos, McDonald’s, Starbucks… Everything American and clean and modern.  Signs that make sense — highways paved and safe — Did I say its heaven?

I am so happy today.  So relaxed and will eat some Clean and good food tonight.  Upon our arrival into town, we took our motorcycles to the nicest BMW dealer in the world! — Santiago — for a full service since we have done almost 11,000km’s on this trip so far.  Well, maybe it’s not the nicest in the world — a bit of an overstatement — but equal to any very large American 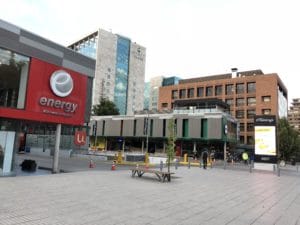 super modern BMW car and motorcycle dealer — and equally amazing — the lights work and are turned on inside — unlike any car dealer I have seen over the past months.  We will pick up our motorcycles tomorrow — our day off all fresh, cleaned and serviced for the last 6,000km ride through Patagonia.

So happy today to be in civilization — even if its only for 2 days before we get back to the hard grind.