Feature image is of the inside of a Eurotunnel rail car which carries people and cars in a bare bones 35 minute ride across the English Channel — from England to France.  George is resting comfortably during the rail ride.

Ever since I landed in London with Paula, it’s been really down time to hang and do some exploring.  I have not picked up my computer to write anything and I have not taken any pictures.  I think it makes sense with my final few days without too much activity.  That will end now — I’m on the move again.

A few days into our London trip, I took most of a day to pick up George from the Gatwick airport where he was sitting inside a super large warehouse.  After filling in some paperwork, paying duties and brokerage George was able to be moved and breath again.  I have to be honest, I was nervous to ride George on the wrong side of the road with London area traffic, but no choice.  I rode over to the BMW Motorcycle dealer just outside of London and stored George until today.  It was daunting for sure to adjust to the wrong side of the road, but again, it was an experience.  Ultimately, it was no big deal — alerting and kind of fun. 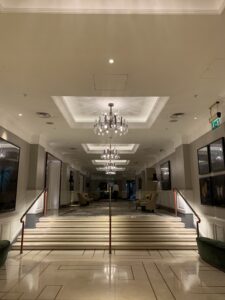 I started early this morning, leaving the JW Marriott with Paula hanging until tomorrow when her flight takes her back to Ft Lauderdale.  I came to the realization that my leg that takes me from London to Tallinn, Estonia — at the Russian border would be a tight 13 days and that meant I needed every bit if time I could get — hence I departed 1 day earlier than planned.  The hotel was dead quiet this morning at 6:30am when I took the 1.5 hour Uber to the BMW dealer in Guildford, UK  where George has been hanging for the past week.

I really had not slept much thinking about all of the articles of clothing, electronics and support product that I have in the 3 bags and one backpack — way too much and too heavy.  My goal was to remove excess items and ship them back home.  I just shipped about 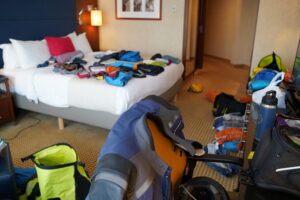 10 pounds of stuff a few minutes ago from my hotel room here in Gent, Brussels. Still, I have another 10 pounds I can probably expunge by the time I get to Tallinn, before shipping gets impossible.  Weight is the killer for a comfortable ride — the lighter the bike, the more relaxing the ride.  I’m carrying a sofa on the back of George now.

After picking up George from Vines of Guildford BMW, I started my ride to the EuroTunnel which I had booked a reservation for George and myself last night.  I really had no clue how this process worked and I only found out yesterday after speaking to a taxi driver and then going to the EuroTunnel website — I then booked a 1:09pm spot on the train.  I’ll get to that in a second.

My objective last night was to film the entire journey on the tunnel experience with my GoPro and DJI Pocket video camera — but like an idiot, I packed the cameras in the panniers on the side.  All that great planning and intensions were thrown out the window — but it would have been hard too.  I am so inexperienced with these very common video tools even though I have owned them for a year, I never have the courage to use them because of my inexperience.  I’ll try to get some value later on in the adventure.  Oh well.

If I think about the event to get to the tunnel, I was relaxed, but on edge too.  What should have been a 2 hour ride took an extra 45 minutes because I kept getting lost within 10 miles of the tunnel.  I also forgot at one point that I should be driving on the left side and I rode on the right — however — a truck was coming head on towards me.  No shit, I was no more than 50 yards away from a truck hitting me face first and I could see the driver of the huge truck staring at me in disbelief.  Lucky enough I came to my senses and jumped back into the left lane, narrowly missing a pancake Phil home.  All of those turn roundabouts messed me up and I got off the wrong exit probably 5 times and that meant I had to backtrack, sometimes for 3 miles — sucked.

Arriving at the tunnel (Le Shuttle) was really something to behold.  It’s a massive property with tons of concrete platforms, routes, roads, bridges and wires high above.  The idea is that you take your truck, automobile or motorcycle along one of multiple roads which leads towards a train purposely built to house about 100 autos each in about 10 sections, with each rail car holding about 5 autos on each deck — the train is a double decker.  Motorcycles go in last and someone is there to show you where to go, drive on and park the bike — meaning angle and location within the train car.  The orange vested staff are really nice people, very helpful and cheerful — kind of shocking given they do this mundane job daily.  I think trucks have their own trains which must be built for those large vehicles.  Anyway, the ride takes just about a half hour to go the 30 mile ride under the English Channel into France.

Once we got to the French side of the Channel, the dismounting into France from the train was very simple and organized without any traffic, partly because the infrastructure is so large handling thousands of automobiles and trucks at one time in long queues, both coming and going from each side.  More interesting is that France looks like France — it is so natural and 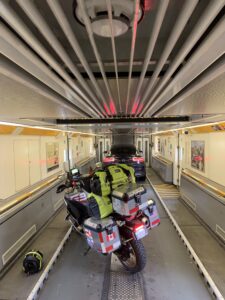 actually very different that our departure location in England.  I would say that the English side was manicured — in fact, I got lost at one point and had to turn around at some country club parking lot, albeit, traversing through a super narrow tree lined uneven country road boarded by old heritage stone walls — super beautiful.  The French side is all unmanicured farms, overgrown crops and weeds, cows that smell like shit littering the road with a pungent aroma like you would expect in a third world country — remember these are the people who don’t shave their arm pits — oh natural is the edict — but its France and I liked it and kept looking at the unique countryside while riding.  Oh, the speed limit was car friendly at 130 kph, or 80 mph.  I drove George at around 75mph because I was so entranced with my surroundings — and quite frankly, not focused which is a bit scary. With all the thought about my stowage weight on George, where I was going, complicated French signage, aggressive drivers…  I was distracted and sleepy too.  At one point, I definitely dozed off.  I’m pretty sure that I have narcolepsy — Its not normal.  At some point I did stop to drink a Red Bull and that helped finish the ride safely.

The ride for the day ended at around 5:30 pm in Gent, Belgium, a seriously stunning old town which I wish I had time to explore, but upon arriving, my goal was to get all my clothing and gear taken out of all my bags, re-organize and ship back home the stuff which I 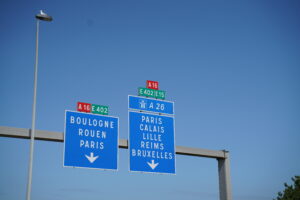 can lose — dropping valuable weight from the rear of Georges backside.  That took me a good 2 hours of unpacking, packing, deciding, and re-deciding which items could leave.  I’m such a packrat and like to have redundancy, but in this case, I need to cut ties and weight with the help of the super expensive DHL courier express service.

Tomorrow is a huge day – Haribo Candy Outlet and Factory.