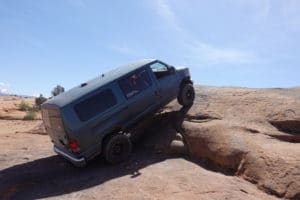 Forget the motorcycle bullshit today — I think we need to deviate from that and talk about the fun part of today’s activities.  Chris and I booted out  for the one hour drive to Moab, Utah, home of Jeep Week in Chris’s  customized 2008 Chevy van – 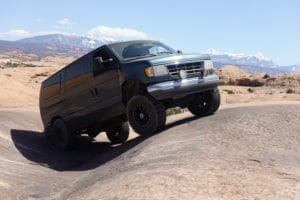 – and I mean big van designed and built for off-roading.  Why you may ask?  More about that in a second but you really need to click on these images to enlarge them in order to appreciate the scale of the surroundings. 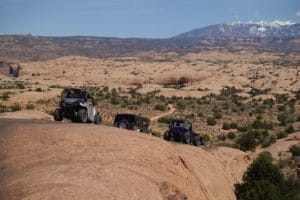 This was another first for me and I was excited to see Moab because wherever I travel along this trip and I tell anyone that I’m going off-road motorcycle riding in Utah, the next question is always,.. Are you going to Moab?  Where?  I had to look it up in Google —  Ohhhh, I get it.

Moab is the center of the universe for off-roading; converted and custom jeeps, things that 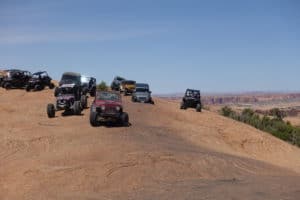 look like futuristic dune buggies, motocross, biking variants and anything with a motor.  That includes the odd-ball crazy hardened truck like Chris’s van.  The reason its so popular is that its just a rocky environment combined with super big elevations — up and down but rarely flat.  Most of all, its a large  community of thrill seekers to gather with no real oversight by the government and supported by volunteers and everyone participating are willing to give a helping hand.  Hooray for those libertarians!!!!!

I had no concept but I was willing to go for the stimulation, a 3 hour trail, designed specifically for any off-road vehicle and adventure seeker who likely drinks gallons of  Red Bull or Monster.  I’ll save the words and get you pictures. 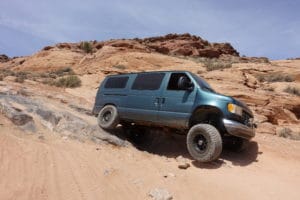 Chris is like a rock star there — first, he knows lots of people.  Second, his van is real big compared with anything else there but he has invested $14,000 into making it an off-road and hardened gecko on these tracks.  There were literally times when any onlooker would think he would drop the truck or slide sideways — but it always ended upright and safe.  His driving skills and experience are clearly spectacular, but his balls are made of steel.  Mine are not, but I felt safe most of the time.  On occasion, I was going to shit the bed and I offered to get out, take a picture and then get back in when the climb or drop was completed.  One of the climbs, I had to go up a near 100 foot vertical rocky hill in my skate board shoes — not built for that sort of thing — I admit it, I panicked a bit half way up hoping I was not going to slip.  Still, it was worth it watching the truck do its magic — from a safe place.

Of course there are a 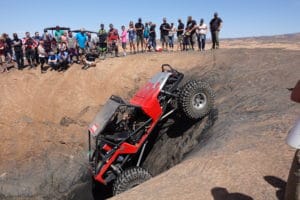 few  side challenges  where anyone can take their vehicle and try to out smart the hurdle.  Check out the picture on the header — thats a hole with about a 40 or 50 foot deep drop —  steep on the entry and super steep on the exit.  When I first got there, near the top of the escarpment and 2 hours into the obstacle course, we parked the truck along with dozens of others to see the show.  The first guys jeep was on its roof and wheels sitting upright facing the sky.  15 minutes later and a bunch of 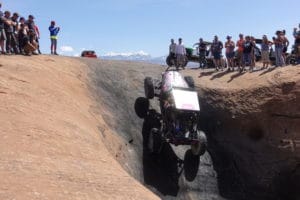 nardy guys  helped pull out the truck with a wench — and some smart actions.  Five minutes later… New participate. 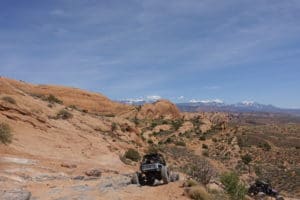 The route was never easy, nor was it comfortable, but it was super fun to see that their are hundreds of people today, the last day of Jeep Week, and probably thousands who came throughout the two weeks to do these outdoor activities.  I come from a different world and never knew.  Great, I love it and 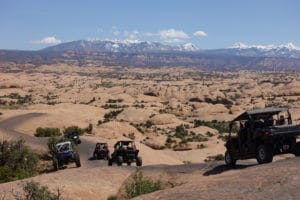 appreciate these people for their love of life and use of the outdoors.

One common thread I have heard more than enough times is the hatred for the “tree huggers” who want to shut down this type of activity to limit  motorized vehicles in the desert.  Apparently our last President’s administration shrank the amount of area for these activities, including off-road motorcycles, in his last days of his administration — I’m only a passer-by but I can see these folks are just enjoying the same environment and topography and probably should have equal rights  but we all know that its all about big money lobbyist with the last President — I don’t see the participants hurting anyone and like Chris, its their life and passion and for Obama, its was his personal growing pocketbook that matters for him, but hey, I’m only passing by.

Tomorrow, off the grid for the day — more motocross lessons deep into the desert.