After going for lunch with Larry Schecter in August, 2014, it had to happen.  I knew it was something which I had to do.  No bucket list or anything, just an ongoing plan to explore unique places and don’t stop.  No-if-and-or-butts.  Neurons were snapping, or burning or whatever they do.  I was going with Paula to Antarctica.  Its a must.  Ok, now for the action plan…

The next day, I met with an agent who told me about Lindblad Expeditions to Antarctica.  National Geographic, the expert in world’s unique Adventure expeditions owns a research Ice Breaker ship called the Explorer.  It holds 148 lucky souls who travel for 2 weeks in the southern hemispheres summer from the southern tip of Argentina, Ushuaia – Aka, the southern most town in the world.  Unlike other expeditions, the ship has specialized staff who are legit National Geographic photographers who teach shooting in this great landscape along with other environmentalists and geologists to learn all about the area from the experts.  I thought that was great.  Travel on the boat for 2 weeks while crossing the Drake Passage, hanging around icebergs, of course sharing space with thousands of penguins, whales, along with other wildlife and natural scenes — taking tons of pictures and visiting a place where very few get to go.

Every day in at sea, you go on a zodiac to shoot pictures and head to land from the Mother Ship.  Their are no docks in the Antarctic seas —  Expedition stays as close to land/ice as possible and zodiacs in either rough or calms seas — luck of the draw – take you out.  You wear cold weather parkas, waterproof Gore wet gear, top to bottom.  Heavy custom boots are also needed.  Love that.

Pain was setting in.  How fast could I book.

Paula was about 20% into this idea.  Getting trapped on a boat for 2 weeks, getting sea sick in the most active seas in the world, bundling up in the winter was not her cup of tea.  The Marines Drill Sargent going hiking in Patagonia and South America mountains is her thrill.  Good, were both happy.  I booked a rugged and very outdoors trip through rural Argentina along the way.  But we all know Paula — the best!  She is a trooper and allows Crazy Phil to be Crazy Phil.

It was within 24 hours from learning about Larry’s trip to the Antarctic that I had booked my own trip down.  Well, its now November 12, 2015 and were on our way.  Just left Miami and now in Houston.

As I said, the trip morphed.  What started as a trip to the Antarctic has now turned into a 30 plus day adventure starting in Rio do Janeiro, Brazil and heading down from the top of Argentina all the way to Patagonia and then finally in Ushuaia in 2 weeks.  Coming back, we stop in Buenos Aires for a couple of days — then back to Miami.  All throughout we have booked an adventure travel program.  We start with 2 days in Rio to decompress and then get to business.  Living in Florida, I really could care less about the warm weather or beaches so the faster we can get going into the countryside, mountains, local towns, local people, icebergs and away from Rio, the happier I am.  That said it’s the western hemisphere in December so it will be warm until we head really down south and sure, Rio will be fun.

The trip is basically comfortable hotels the entire way however I did use points to book my flights to and from South America.  Flying United.  Using Air Canada’s Aeroplan points can only mean one thing — Trouble.  Aeroplan should be called “NOareoplan”.  They never have flights.  I ended up booking a 24 hour-two day flight from Miami to Rio (which is only an 8 1/2 hour flight direct).   Listen to this; 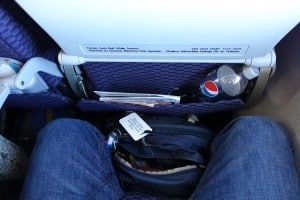 Normally, I don’t care if I fly economy either — of course.  I do it all the time.  Out of Miami, United is a nominal carrier and never used.  But on United, I learned it’s the world of “taketh just a little bit of space from the stupid consumer at a time” until you get no space.  Check out this picture to the left.  I’m not a big man.  My legs were cramped so much, I could now try out as a contortionist in the circus.  Note to Self:  Don’t fly United economy and stick with Jet Blue, American or anyone else.

In the end — Its all about the adventure so poo-poo, who cares.