Feature image of an Inca medicine man — or a man representing himself as a direct descendant of an Inca medicine man.  Again, I call bullshit — but it’s fun.  I took the picture and of course the guys hand comes out for cash.  I gave him a few pennies and he was pissed.  Oh well, I got my picture — cant feed everyone in Peru. 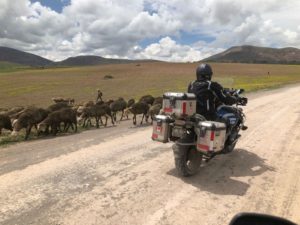 The past few days have been a combination of riding and chilling.   Yesterday we rode from Cusco to Puno in Peru.  It was a full day of riding mostly flat but high altitudes — somewhere between 13,000 and 14,000 feet high.  Its farming country although its cool out and although summer, layers are worn.  Tons of real small shacks, segregated fields and lots of animals living free range.  The route was also mostly paved although we did have a 40km ride on hard packed gravel — although I did have some scares when the bike slipped away from me, but nothing like a drop or anything.  In fact, its been a while since I have dropped.  Last time was in that super high pass with 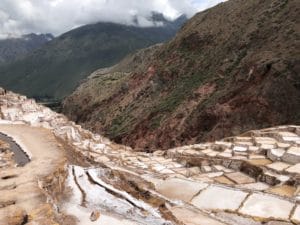 snow. We did go visit a mountain with salt patches split up for different families to manage and farm.  Again., Paula and I visited this same site a few years back but the ride on bikes was fun since it could only be reached by a gravel road with lots of curves and inclines and declines.  The pretty large site is very impressive because really out of nowhere is this mountain which produces large volumes of salt and can be farmed every 20 days by the local families who each get 15 sections of I would guess of about 500.  The poor souls who get the salt patch at the bottom of the hill and have to farm and haul up the salt would in my opinion be the town loser — Its a pretty big decline in this mountain side hill. 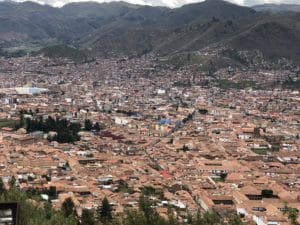 Anyway, after a good 8 hour ride, coming into Puno is like a Hollywood movie set.  When you look from afar, its is a real neat place built into mountains and a decent sized city/town with lots of colors and square geometric shapes.  But when you get into the core, that is when the lie shows up clearly.  Like most, if not all Peruvian towns, its like an Apocalyptic event occurred.  I can’t think of one building that would be habitable in the States.  Half do not have windows.  Most are concrete but not completed and never will be completed and its dirty and broken — everywhere.   Its amazing how something from afar is so good but close is so bad.

Puno, Peru sits on Lake Titicaca, the highest navigable lake in the world at around 12,500 feet – headache zone.  The lake is also 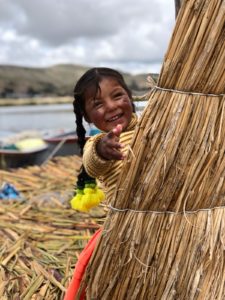 the largest lake in all of South America.  It starts in Puno, Peru and ends into Bolivia and that’s where we are terminating our ride today.

This morning we had a proper field trip for once with a lazy guide.  It was to visit the straw islands of Puno on the lake.  I have been there with Paula and its exactly as I remembered.  Its seriously interesting that a group of about 100 families each live on their own island which is about 100 feet by 100 feet.  They not only live, they cook, they raise their kids, they take shits, they raise duck and some even house dogs.  The straw island is also super stable.  Each of the islands are anchored to the next so they form a string of islands.  Since the Inca times, these peoples decedents have lived on these islands and have honed a method which includes anchoring moss and straw mixed which is about 6 feet deep.  The moss/straw mixture grows and lives in the water and keeps the islands buoyant.  Following that, the island has about 3 feet of straw above the moss which is cultivated from the local water  to make the island walkable and dry.  They replace the straw every 3 weeks and replace the moss structure every 30-40 years.  Its interesting for sue. 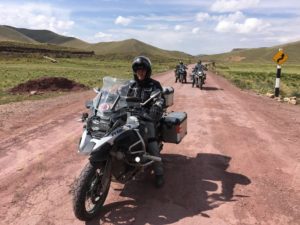 From the island, we hauled out on our bikes to leave Puno and head to Copacabana, Bolivia.  That means we had to cross the boarder.  The entire ride was only 143km but it was slower than just bombing along.  That said, the scenery followed Lake Titicaca and great farms and hills.  I went to this area with Paula for a hike and visit some locals making some knitting goods, but this ride went past that area.  Just neat to see locals live the way they do.

Getting to the boarder it was very different than any other crossing we have done to date.  First of all, it was super quiet.  We walked into the first office to leave Peru and were the only people there — other than the lazy government workers.  After a dysfunctional series of events which almost left us without an exit stamp for some stupid reason unknown, we got our stamp to exit Peru.  Then to exit customs with our bikes.  That was more interesting.  The dude there said that the computer has been down all day due to a lightning 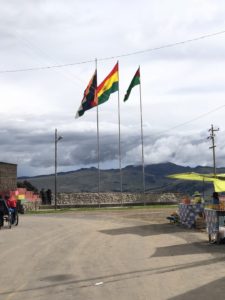 strike.  I sensed it was bullshit since it was 3:30pm the next day and still not fixed.  Turns out I was right — the dick wanted money to let our bikes leave Peru.  Marc was going to negotiate since he speaks fluent Spanish. Now for the interesting part, how much?

Now to Bolivia and that was the absolute best experience.  They don’t give a shit.  Unlike Columbia, Ecuador and Peru, they just stamped anything.  If I gave an autograph picture of Krusty the Clown, they would have 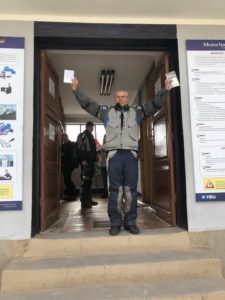 stamped that too.  We were in and out in 20 minutes, a new world record.  We bombed out before someone changed their minds.  Bernt on left got his final papers signed.

On to Copacabana, Bolivia on the shores of Lake Titicaca.  No, its not the same as Rio’s famous beach.  But it is a hot spot for kids backpack traveling.  First time in this entire trip have I seen young people traveling in volume in one place.  Who knew?  In fact, to date, we have seen very few foreigners at all in our travels.

Some bike scares to note:  First was coming out of Puno, Marc chose a route where we went up a series of super steep inclines which each led to a blind level road perpendicular to our road.  Confused?  Similar to San Francisco, but way more steep, Imagine going up an incline which is seriously steep and at the end, a road was atop but you could not see if cars were riding on that road — and on a motorcycle you just cant stop on the incline or your fucked and drop the bike — so you just go onto that oncoming road and prey.  Well, there were a series of 4 of these inclines — one after another.  I was fine riding up, but crapping my pants that an oncoming car would take me out at the top on each of the platforms.  All was good.

Next was a piss off to my building comfortable riding ego.  Coming into the hotel parking lot, we went down a steep and unstable cobblestone hill and that was fine.  My bike jogged a bit, but not too much an issue.  The issue was turning into the hotel, there was a deep dip and I kind of freaked at that.  I wanted so badly to gas my way into the lot, but I just couldn’t.  Will, Marc and Bernt ahead of me did it fine, but I froze.  I did wait and the guys pushed me in.  My heart broke — I have been doing so well and that was a misstep.  Nobody cares obviously, but I do.  Leading into probably the toughest ride of my life in a few days, I did not need that.  Anyway…

Tomorrow, onto La Paz, Bolivia and I’m told its a bit of a shit hole.  I’ll let you know.