Feature Image:  Is of a lady holding a leech for her miniature reindeer at a small village festival held today.  These people are super poor but living life as best they can.

No Kazan is not a Super Hero stupid, Kazan happens to be the name of a Russian city eastbound of Moscow. 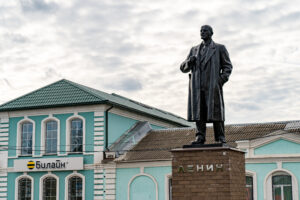 I have not written much about my riding and experiences mainly because of time, or lack thereof.  Its been a different type of ride this time as compared with my great experience a couple years back through South America.  When you have a group of 11 riders, well it has its pro’s and con’s — without too much details, the pro is that we do have a fun group of travelers and all are definitely capable riders so nobody is dealing with their bike or bad skills and further, its easy to pick a friend for the day and just hang.

The con’s of such a large group is a bit longer: Most of which is that you have no time to do individual endeavors.  In a group of six, you ride, stop, take pictures of anything that interest you along the side of the road, get back on the horse and catch up with the remaining group a few miles up.  Not the same as a group of eleven, nope, you can’t stop and that’s a crime.  At night, it seems like we are always out of time after long riding days because we stop so much and too often — I suppose to keep

everyone happy.  I would ride more, stop less at scheduled stops and each individual meet up at a specific location ahead and do as you wish in the middle — take pictures, take a crap, take a ride down a side road — whatever you want — its your individual ride.   Not so with eleven people riding, its a long train and you cant break away or the chain is broken.  That sucks.

One last thing that is just not my favorite item while riding during such a large group is that when we stop, we are going to tourist locations — most of which are bullshit and not where I would want to stop.  For example, today we stopped at some Russian youth camp somewhere between Izhevsk and Kungur on a little lake.  Yes, the camp was a mirage in the middle of poverty — we entered through a gate maned

by a few rough looking guards and got into a clean, new and uncommonly modern log buildings which house a camp designed for sporting and kids or some sorts.  Now the only issue is that it was empty — no kids and little staff.  Let me make this clear, its still in August, we left the real Russian rural impoverished communities and got to a clean and modern camp, empty.  What does that say?  It says that this is what socialism is all about — when you don’t pay, you don’t care.  This camp has no profit motives because the government owns it so its a total waste.  We waited an hour for a cold coffee and left — How stupid is this economy — good luck America should the drivers of socialism win the minds of eager idiots — enough said for now.

So the rides daily throughout Russia have all been pretty similar; long, flat topography, dark late autumn cold and often rainy 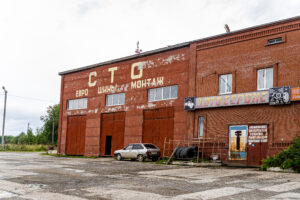 skies and grey clouds.  While riding in rural Russia, there is no doubt that this is a very poor country littered with small wooden houses which should be condemned in most cases.  We’re here in late August and the temperature is in the low 40’s Fahrenheit and rarely do any of these houses have a solid roof or any insolation — no, they are designed for the Deep South in the states where it never gets cold.  I can’t imagine what its like to be inside these homes during rain, snow or higher winds — virtually all homes in Russia are exposed internally to the elements and clearly there is no funding to repair.  Apartments are absolutely all in a state of erosion to the point where virtually none have had any investments in 40 years.  Externally these apartments have layers of their skin falling off, be it concrete, brick or glass.  How can I say that all apartments are in this state?  Easy, they are almost without exception. 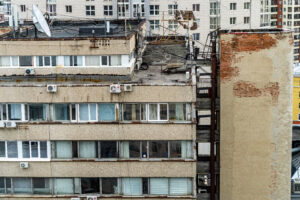 Now this all leaves me a bit frustrated because I love to shoot images while traveling of real people — its definitely my favorite thing to do.  I tend to not shoot images because I just dont care about ice caves, youth camps, or glistening government buildings is not of interest to me.  One last example happened today, we were riding through the countryside and its very common when entering a new town or village, the community or probably government put up some kind of monument when entering the town, probably not much different than some American towns.  In the case of Russia, because the government does everything, all towns have these monuments showcasing something about the town.  By way of example, we could pass a town that is known for its wheat and oil pumps, then the sign would have some kind of rudimentary metal wheat symbol and oil tower — 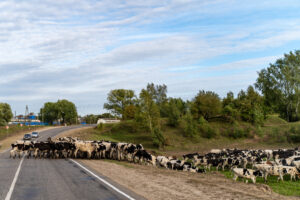 but very basic and old and more likely in a late state of rust eaten metal pipe.  Today we passed an old monument that gave me a second look — it was a in the structure of a 20 foot water tower, but for some reason it had the letters “CCCP”, the old Soviet Union letters and this monument had character because it was large, rusted and breaking down. I drove by and thought to myself that I have to peel from the train and turn around to shoot George in front of this blast of the past — I debated for 5 minutes, but that would have created havoc with the train of bikes so I decided to just be miserable and go forward with only a fading memory moving forward and no permanent image.  I really have to say that bugs me but not like I carry my feeling into the group — its nobodies fault — its just reality.

Enough of the bitching — this is the group and adventure.  On the whole, its fantastic to get the honor to see the real Russia on a bike and the riders are as I said, super nice and easy going.

So yes I was in Kazan, the capital of the Tartarstan Republic.  The what republic?  Is that the same as the Conch Republic, aka, the loonies who want to create a new country currently known as Key West, Florida.  Nope, its not the same — and to be honest, I dont really know why in the country of Russia there is a city in a republic but who cares, Kazan is a sleepy city in the middle of nowhere which approaches the invisible wall between Europe and Asia within Russia.  For those uneducated, as I was, Russia houses the distinction of living within the continent of both Europe and Asia and today for example, I will be crossing from Europe into Asia.  But while in Kazan, you can see that things are changing — peoples faces features are moving from caucasian to asian — or a mixture like Mongolian.  Let’s get to some interesting standouts about Kazan — the city is new and old and its obvious.  Government buildings are new, massive, modern and clean.  Churches are glistening with bronze tops and millions of dollars invested to keep them that way.  Well, private buildings are dirty, dull and just livening life on the downside.  Its so obvious, this region is lusting with oil exploration and revenues — so what does that mean?  Sure, the government gets the money and the people, well, not so much.  Again, its the BIG government game, dah, the people get shit.  Please, please learn from this, socialism is a horrible game to dangle with Americans — please.  No free anything or the government grows — and revenue intended for the middle class?  Come with me for a ride through Russia before you move your bullshit lips.