Feature image is of the entrance to the buddhist Monkey Temple in Kathmandu, Nepal.  Its our first real look at the colorful flags that we expect to see everywhere in Nepal.

It’s been real hard to get to my journal.   The last few days have been packed with either touring Dubai for a second and third 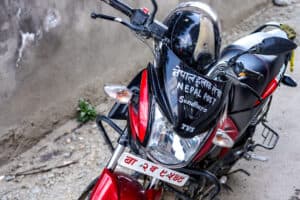 day and then crashing dead tired from jet lag  — from Dubai to Nepal — while now we are in Kathmandu, a real eye opener.

I’ll just finish saying that Dubai is unreal.  Not a place to visit, but if in transit, you will likely never see anything like it again — has to be the worlds biggest construction site in human history.

I certainly will revisit the Dubai days later, but getting current with our day in Kathmandu is probably more fresh in my mind.  We got to Kathmandu yesterday later in the day after a 4 hour flight.  Interesting enough, we had to bypass Pakistan since their airspace is closed due to flaring issues between India and Pakistan.  Anyway, center seat ignored, all was ok — we made it finally to Nepal.  Yahoo and Finally, were off on our journey to Base Camp. 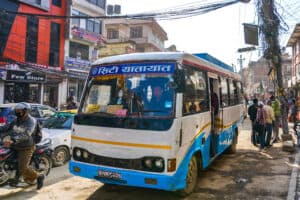 So the drive from the airport to our hotel was certainly an eye-opener.  Sure, I’ve been to some real poor places like Peru and Bolivia, but Nepal we can say, steps that poverty level up quite a bit.  This place is piss poor but I will say seems somewhat functional.  I think if you mix the chaos of Vietnam traffic and volume of people with the rubble and roads like the worst you can imagine, then sure, that could be Kathmandu.  As with most of these remote countries with countrysides and urban centers, the poor country people migrate into the city until it busts through the seems.  So if you took a broken city and pick up and drop 5 million people into it — well, its active.  I always get a kick our of tree hugging North Americans who fight to keep one more tree or one less straw — they need to do some traveling and see the rest of the world — its a dump and a carbon filled dirty smoke stack 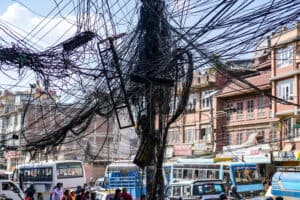 bellows of autos, busses, street fires and yes, animals who blow farts.  Be it South America or Asia, the reality is that stopping American people from enjoying the use of a fucking straw is ignorant.  Anyway, thats my rant after doing enough third world travel which dicks in California have never seen through their utopian assholes.  North America is not the problem.

Moving on — We met with our guide for just half hour after our arrival to our hotel, the Shangri-La.  His name is Prickass I think.  I asked him a few times to restate his name but I seem to strike out.  But phonetically, his name is Prick like, You’re and prick… Followed by Ass, like you’re an Ass.  So when you conjoin, I think it’s safe to say that our guides name is “Prick-ass”.  Done, I nailed it.  So he gave us a real high level overview of our Base Camp trek.  I only could half listen after just coming over a bad cold and my A.D.D. was kicking in.  I got his name so that is all I really needed to know and I’ll figure the rest out later.  We will meet the next morning at 10:30am.  I just went to bed and crashed — slept without a break until 9:00am which was terrific. 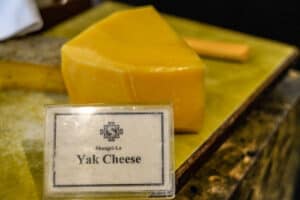 Had breakfast the next morning and really nothing interesting until I found my new favorite cheese — Yak Cheese.  Had to document that moment.  When the host of the empty restaurant saw me freak out over Yak Cheese, he offered to bring me the entire roll of cheese — I took him up on that for a picture, for sure.  We waited about 10 minutes, which may not have been worth it — but was fun.

This morning we met with Prickass along with a city guide.  Don’t know her name — too hard — sorry and don’t blame me please, I tried.  She took us along with our driver, Dennis, a Nepal native who does not speak a stick of English — but has a cool englishized name —  to check out a few of the World Heritage sites in the city.  The drive to the first location was as you would expect — a cross between auto dodge ball and some sort of bumper car ride — too bad there are small motorcycles and people who get in the way of the fun.  I saw a bus squeeze to a wall in order to go parallel to our car heading in the opposite direction because 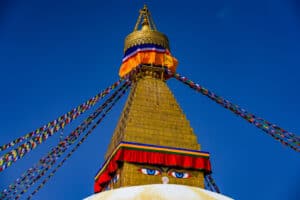 we both had no room on either side — problem was that there was a person walking on the street along the wall.  I absolutely thought that the bus had squished that pedestrian.  I checked after and nah, the guy was still alive.  Reality, is that with these narrow streets with thousands of bikes, cars, busses, trucks and people sharing the rubble, massive potholed roads, its just a game for me.  I honestly was wonder how anyone gets a drivers license — do we really think that such a certification exists?  I guess not.

Ok so to the first site and it was called Swayambhunath — let’s just call it “Monkey Temple”. Do I need to explain why they call this temple its name?  Tons of monkeys in the mountainous Buddhist temple. I am horrible at getting to the details about the facts around the site, but since I am very visual, I can say that its fun to see the local people do their thing — with very few 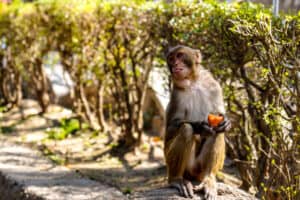 tourists, so its real life here.  I think it was a new-moon so the place was pretty busy since that is a religious time of the month but I dont care.  Watching tons monkeys steal food from worshipers and chomping was worth the cost of admission.  We did see our first sign of the colorful flags which we should expect to see all along our trek up to Everest.  Seems that the flags have 5 colors representing; water, sky, ground, fire and something — whatever, they are super colorful and in huge volumes draping the entire temple.

We then drove to our next location known as the Temple Pashupatri — A Hindu Monastery and some kind of massive community — which I would not call a tourist thing since probably 95% or more were local people.  This place had like a billion people there that were dressed up like the most extreme religious clowns.  I don’t mean that with disrespect at all — its their religion and I am not judging, but they seem like a hybrid of hippies living in a commune somewhere hidden in Southern 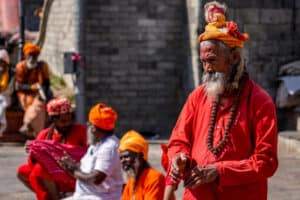 California and devout people wearing long beards, shag carpet tops, crazy sunglasses — mostly wrapped in an orange house coat and plastered with colorful face paint.  Now, I really want to say that I am not being judgmental — I’m told that this type of people are Hindu wanderers, known as Sadhu people.  I can only say that I was in heaven — these are my people.

Upon entering the temple, we did hunt around the thousands of people and we were told that this place is used to cremate loved ones — then the ashes are dumped into the river that flows through the monastery.  Its real dirty and smoke burning throughout.  Of course I asked if the smoke was a dead body and of course the answer was, yes.  Dah.  I’ll spare you the details, but in one section a dead guy was 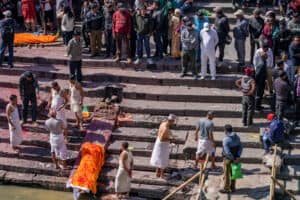 covered and leaning down towards the river — feet exposed.  A few men were doing something but I watched for 20 minutes and it seemed like they were like mice just coming and going.  The direct relative next to the dead body was having his head shaved to mourn.  Anyway, I learned that the Hindu funeral is a public event since about 100-200 onlookers were watching this all go down — and next step for the poor dead dude is the barbecue.  I liked the spectacle. Poor guy wrapped in orange on the left has his feet out.

We did visit another buddhist temple and went back to the hotel.  Our job now is to empty 10 pounds each from our bags we will be taking on the trek.  Seems like we are limited to 30 pounds each.  When you take into account that we have a sleeping bag, toiletries, soaps, boots, clothes for 15 days of sweating in cold climates, camera 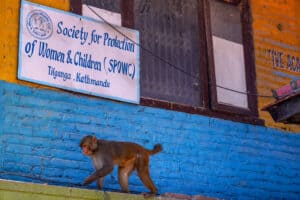 gear…  Well the only solution is to jettison clothes and amp up the smell when wearing my clothes twice or more.  I may end up smelling like those monkeys —  Not my issue — and Paula never sweats so thats not a problem for me, she won’t smell, I’m good.  Mission accomplished.