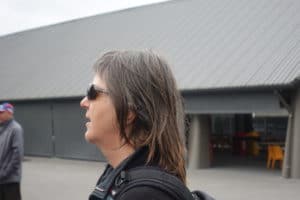 Meet Kath, our guide for the Northern Island part of our trip.  I thought that I would introduce her since she is somewhat permanently attached to Paula and myself for the first portion of this trip.  Well, we’ve actually blown her off a bit in the last day but hooking up again today.

Kath is — well, unique.  I wish I could nail the perfect description, but I will surely fuck it up with a nuance missing.  She is like a complex fine wine — very difficult to describe.

As I mentioned before, she hales from Portland, Oregon.  I think this means that she started life a bit flowery and I think from another planet called Nutso.  Check.

Physically, I wont go there too deep since that would be quite rude, but I have to focus on one or two main areas, first her teeth and I will say one word there — “fragile” and on the verge of extinction.  The next physical attribute worth mentioning are her man-hands which are the size of sausages.  I just can’t stop staring — sorry, its rude, but its so interesting.  Take Sarah Jessica Parker’s hands and double the size.  Yes, no exaggeration.  Of course Kath considers it distasteful to use anti-perspirant.  Both Paula and I caught whiffs of her natural perfume many times on our hike and in the car.   Why do some people not think that this new invention called anti-perspirant is worth the cost?

In her mid-twenty’s she left Oregon and traveled until she found New Zealand.  Found home — Off the grid and loved it.

Kath is now in her 50’s, married twice, both men dead.  I need to learn more about that.  Either real bad luck or their is a side of Kath which is deeper.  That said, Kath tells stories which are l-o-n-g, super animated and drawn out like a hillbilly from Oregon.  At many times, I tune her out.  Like really tune her out.  Its actually amazing that humans can do that.

Net, net, Kath is a cross between a lady version of Grizzly Adams, a person who prefers to live off-the-grid and a nice 50+ year old lady who is living her dream without rules and regulations and government.  Hmmm, she might be a Republican.

Anyway… She is nice and willing.  Today were heading to the Tongariro Crossing, one of the most scenic hikes in the world.