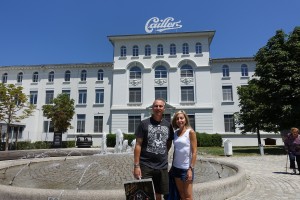 Ok, lets play the game — Who likes chocolate better, you or me?  Don’t even bother, lets agree to disagree.  My mind gets messed up when I am around chocolate.  In fact, often, its my dinner along with ice cream (frozen yogurt).  Love the shit. 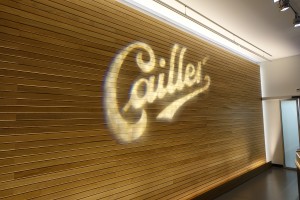 And I represent one of the 20% of superior intelligence who think Dark Chocolate is the best of the best.

So its for that reason that when I knew I was coming to switzerland, it became a bit of a mission to work around visiting chocolate factories.  I tried Lindt first.  Big right?  Bummer, no tours and it’s near Zurich — I’m there.  Next, Toblerone is made in Bern.  Going there too.  No tours!  Fuck, whats left?  Ok, so I try Nestle — I know they are headquartered in Switzerland.  Problem is that each time I google chocolate tours for Nestle, I get this company called Cailler.  Tripadvisor gives the tour a great rating.  What the heck is Cailler?  Anyway, locked and loaded…  Tour is set and we’re going to sleep in Lausanne because its close to the factory.

Turns out that Cailler was the first chocolate maker, and biggest in Switzerland back in the 1800’s.  Making a long story short, a guy named Henri Nestle merged companies with Alexande-Louis Cailler and another guy named Kohler, all from the Gruyere region of Switzerland in 1929 to form Nestle Company.  Done, now we know.  The oldest and biggest chocolate in Switzerland is Cailler.  Nestle headquarters is 30 minutes south on Lake Geneva in Vevey.  Enough of the history lesson. 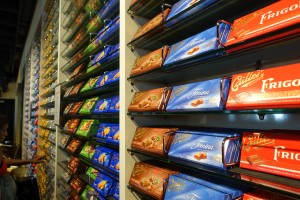 Chocolate tour was a 9/10.   Excellent marks given for environment.  You are in gods country — Factory is at base and huge mountains in background, lots of green grass and while modern facility, the buildings vary in age from late 1800’s – early 1900’s to keep the heritage all the way to a modern new facility.  Huge place.  Tour was hokey, but fun.  I was in the middle of a ton of little pint sized kids all around me.  All good but have to subtract at least a point for that – maybe more.  Last points given for testing of chocolate.  Lets just say that tasting of various chocolates is unlimited if you want.  Enough to leave you sick when you leave.  I gorged on dark and at one point, was downing about 100 pieces per minute.  It was a spectacle.

So after the tour, we jumped into the car to visit the epicenter for a famous cheese in Switzerland, Gruyere.  Again, fucking amazing experience.  I really had on clue about Gruyere although I have heard the name before.  I did a Google and found 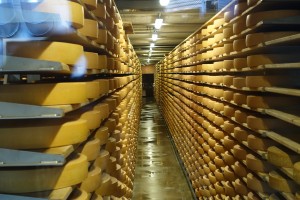 out randomly that Ranker.com puts Guyere as #5 most popular cheese in the world.  Who knew?  So its a regional thing — like a 100 factories in a cooperative which make this great stuff and certify it as authentic Gruyere.  Lots of French fakes, I’m told, but hey, I’m not a cop.   And I can say after going through my expert testing and limited knowledge, its spectacular.   Depending on the age of the cheese, the profile changes dramatically.  From soft and sweet in early stages, to sharp and amazing with age.

The factory tour we took was ok since it seems that watching people make cheese is akin to watching a 3-day cricket match — real slow and boring.  Interesting though, this place  always store about 4,200 wheels of cheese for aging.  Takes tons of milk to make one round disc.  Finally, between the huge production of chocolate and cheese in this area, they had traditionally sourced the milk locally which means that their are tons of milk cows grazing the area — I can’t remember the numbers, but mind boggling amounts. 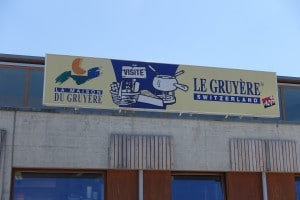 Alright, I get it, who cares.  Let me finish by saying that we went to the town of Guyere which was typical tourist trap for europeans visiting and I guess, lovers of cheese.  But totally fun.

Ok, next, hiking…
It was about 2:30 and we still had some energy so we took off 5 miles to do some hiking.  Idea was to go for a couple of hours and then go back to Lausanne which we still have not really visited since landing there a day ago. 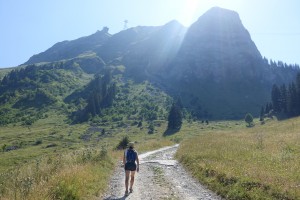 That hike actually lasted 4 hours.  I’ll keep it short… Most people when they see a train on cables going up the mountain, they say to themselves — hey, it must be a wicked track up to the next level.  Yah, right.  When married to Paula, you get a

different picture.  Think boot camp.  We decide to go up a 45 degree incline for about an hour — aways up — always 45 degree angle.  I’m dying.  Picture on right shows what I see the entire walk.  And if I slow down, I feel like I’m letting the sergeant down so I keep going without too much of a fuss although I’m sweating and burning lactic acids in the 85 degree temperatures.  I’m not complaining, but I will say that I wanted a helicopter to pick me up half way — it was great when we finally got to the next level, meeting up with the train station.

We then went for another hour along a great path which followed the mountain-side.  Together with amazing cattle grazing, the views were spectacular. 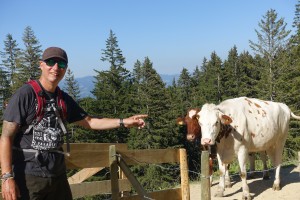 We then circled back to the gondola station to go up to the next 2,000 ft elevation higher and check out the peak.  What can I say — were in the Swiss Alps, overlooking the French Alps.  Pinch me!  If I sound redundant, fuck off, its that amazing. 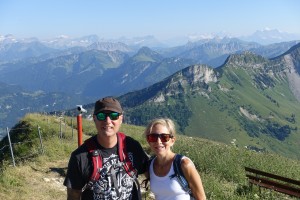 After the 4 hours of trekking, it was  time to go back to Lausanne.  I had an incredible Cheese Fondue (Gruyere of course) for dinner overlooking Lake Genevea!
Enough said.  Fucking amazing and busy day!!!