Featured image is a sign of the famous Patagonia Region and our stop at El Bolson — along Ruta 40.

So being a big person, I admit that I was wrong.  Big mistake.  I was hasty in my last post assuming that we are coasting to just 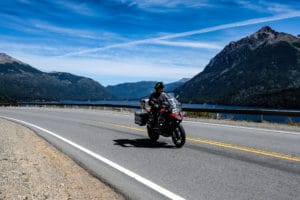 basic scenery — lame surroundings and the best was the past.  Today all those negative thoughts were dispelled.  Our ride was absolutely amazing, from the time we left San Martin until we got to El Bolson with our fun stop in Bariloche.  Just a cornucopia of brain-bending scenery, atmosphere, clean-crystal-clear glacial lakes and massive mountains tracking our entire day. 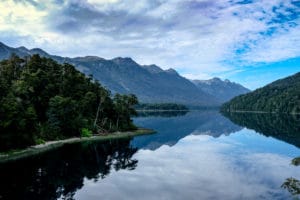 It really only took less than 30 minutes out of San Martin and we were back into the mountains — or large escarpment in a big way.  I hate trying to describe the surroundings because everyone has their own experiences — and if I give an example, it may be meaningless.  Also, I find that people always love their own local surroundings that it clouds their reality of what is great.  How many times have you spoken to someone who says that their local recreation area is the best in the world? — countless.  So here is my attempt at explaining the first hour of our ride.  Think Big Sur, California, and its dense green treed mountains – but that is too small.  Manfred said it reminds him of Salsberg, Austria’s lakes.  I would also throw in the Pacific Northwest of America with its rugged mountains.  Mix it all together and you get the idea.  7 amazing very large lakes, massive mountains surrounding all the lakes, green trees and lots of 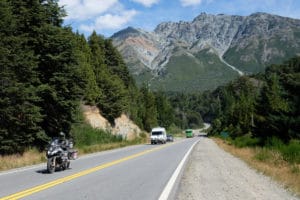 vegetation.  How about just spectacular paved roads that never go straight — always are curing around the mountains and lakes.  Get the idea?  Fucking great!

I should add that in the mornings the temperature drops to the mid-high 40’s and its cold.  We dress for success and nobody cares, but its cold.  By afternoon, the temperature raises to the high 70’s.  Such a swing in temperature in one day is amazing.  But we are getting further south daily — and as I have said, days are getting longer which is super cool.

We stopped often for picture breaks.  I took only a few because who gives a crap about another picture of the landscape, but let me tell you, I should have taken more — it was that nice.  I was totally amped by the visual inspiration, knowing that in a few weeks I will be back to flat riding and certainly straight Florida — major unhappiness about that.

Anyway, we had a coffee-stop in a resort town where we all thought could be heaven.  Its now the last 2 weeks of summer holidays in South America for families [its summertime here] and the top of the Patagonia region is resort laden with ski hills, mountain bikers and tons of travelers.  Our next stop with probably the most famous and popular ski resort area of Argentia, Bariloche.  Paula and I were there a couple years ago and the one thing I remembered is that it is also the Chocolate capital of South America — also known as Little Switzerland.  There are dozens of specialty chocolate shops in that town and I remember every one of them — not really, but I did remember one of them after revisiting because it was so large.  We all stopped for a quick lunch in Bariloche — Kanit [Will’s real name in Thai] and I chose McDonald’s — my first American food since Mid-December before I left for my trip.   Big Mac, small fries and diet coke — It was so good.  Following that was my first McFlurry in ages and then came the free chocolate samples and then the 6 pack of chocolate truffles.  I was happy — and unhappy at the same time. 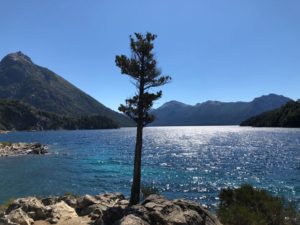 But that said, things were only going to get better.  The scenery was going to increase — let us say 5 notches.  don’t know exactly what a notch is, but its a lot and 5 of them are even more.  Man, the mountains followed us for 130 km.  It was insane and more the entire ride — and to boot, ultra curvy roads with you guessed it — No Speed Limits!

The pictures I added here do not give the size of the mountains justice.  They are very large and one after the other lined up.  One of them is snow-capped and so large that in fact, it is 1,200 km away from us in Chile.  Can you imagine seeing a mountain in the background that is 750 miles away and still is visible easily in the landscape?  Hope that gives you an idea that this is not your normal mountain spread – the Andes are even super special to the hardened and well traveled Europeans.

But before all that — don’t let me forget that I dropped the bike again at zero speed.  leaving town, the hills were San Francisco steep going up and almost the same issue as a month back, I was following a small piece of shit go-cart car which was going up the hill in front of me and it could not decide if it was going to stop, turn right or turn left.  I was going up the hill and waiting for a decision.  The asshole stopped mid-hill without notice —  and I stopped without giving my bike gas — and that’s the formula for a drop.  Any machine that weighs 800 lbs and gravity wants to penalize you for your stupidity — gravity always wins.  My bike dropped while I stopped halfway up.  Looking around, I decided to stare at the bike and hope for a happy outcome.  Almost immediately a car stopped and another guy came from nowhere and asked me in Spanish if I needed help.  I said yes.  The guy weighed maybe 130 pounds wet.  The other car and guy was normal size.  I’m looking around thinking that I guess I need to help too, but I am certifiably useless.  Lucky enough, the skinny guy took my handlebars and I swear almost lifted the bike by himself.  I barely lifted a finger.  The guy from the car supported the bike while I jumped on.  All within 1 minute, I was off again.  No fuss and no damage.  I debated telling Kanit about my experience — I decided it was no value.  He was just up ahead and never asked why I was late the one or two minutes.  That was ok.

We ended up in the very small town of El Bolson, Argentina.  Hardly a restaurant and certainly no Diet Coke for sale in the entire town, but the backdrop of massive, detailed and rugged mountains all around us — beaming in the light of the golden hour.

Sigmond Phil Says:  To conclude, don’t be negative about the future.  Just as you give up hope — something amazing happens and your scars are healed.

Image of the lake with a tree in the center is taken by Manfred.