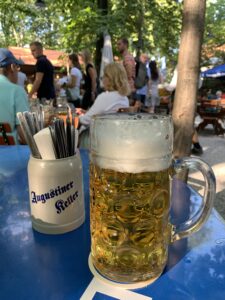 Anyone who knows me, knows that beer is really close to the last beverage that I would reach for if I were on a desert island, thirsty for some wet happiness.  Its not that I hate beer — and its not that I have anything agains beer — and its not that I judge anyone who drinks beer, no I get it, its a relaxing tasty drink for probably a billion people.  I just happen to not like the taste — like some people dont like eating olives, which I love.  Get it?  Ok, enough of that set up.

Tonight, I went to the Munich Biergarten and like I have the two previous times, I had such a great and almost euphoric time there.  So much fun just hanging with about 3,000 or more thirsty social palettes in a giant park setting; drinking beer, chatting, laughing and wandering around in such a great fresh summer night.

Let’s double down here if I still have you, throw in a food-fest of authentic schnitzel, pretzels, bratwurst, boiled potatoes, 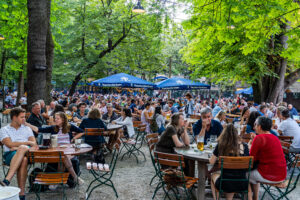 sauerkraut and I can go on and on — great street food full of happiness contained in this enormous park with happy people.

So lets roll this in — I would not go to Munich in the summer time without having dinner at the Biergarten.  Last night I went to an authentic German pub and met my 71 year old Kuwaiti friend, and that was fun.  Tonight we can amp that up by a factor of 5 at least.  And let me make it clear, as I said, I’ve been to same biergarten twice before with Paula so I know its no fluke that this evening 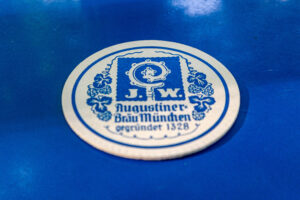 was such a fun event.  Paula and I shared the same great experience while here, so maybe the people have something that can be copied or bottled?  I dont exactly know the history of beer, parks, German people and culture, but it definitely dates back to at least 1328 — and how do I know that?  I have a paper coaster that I took a picture of and it was dated 1328.  How is that for sleuth journalism?

high temple of happy bubbly, I decided to have someone else drive me.  I settled down on one of the thousands of benches and tables.  Its real easy to pick a place and just set your butt down — no requests from a server — just sit down and get involved, which I did.  I called over my waiter who like all the others were dressed in traditional German lederhosen and women wear traditional dress — and crazy enough, more than I can count, visiting men and women are dressed in the same couture prancing around the park, by choice?  Yah, they do — almost like every night is halloween for these Deutsch folk.  This is a conservative temple — visitors all look alike here.  I didn’t think about that at the time, but now writing, that is kind of strange given the multi-cultural town that Munich has become — but then again, much of the Munich population cannot drink alcohol according to their faith.  Anyway, I ordered a beer without hesitation — its a must.  Like the night before, I gave the choice in the blonde grainy bubbly to my new friend 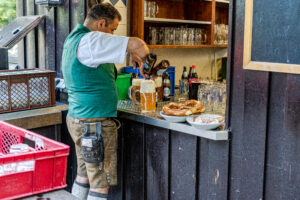 who serves as my advisor for the night.  He brought over a huge and heavy solid glass mug, so heavy that I don’t think Im man enough to lift with one arm — but I did because I didn’t want to show my lack of upper limb development to anyone around me — who could give a shit either way since everyone is involved an a loud but nice park-like amplified chatter.

I took a sip and now I was one of them — I became German at that moment.  I should add that it tastes great too — a great selection from my host for the evening — light and tasty.

My waiter was a tiny guy.  Think of what I said, I’m in a GERMAN biergarten surrounded by large and physically demanding 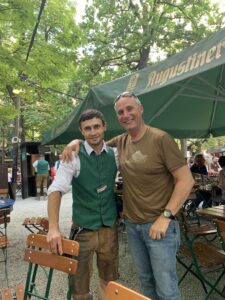 German men and I’m being served by a tiny, skinning guy — so what’s up with that?  Well, as it turns out, my friend Dima comes from a former Russian country (can’t remember name) — he is not German, ah ha, makes sense.  Anyway, Dima, my new best friend for the night saw that I was shooting tons if pictures with my Sony camera and he offers to take a picture of me in the park — I say sure.  Dima takes ahold of my camera and seems to know what to do and he says that if he could buy a new camera, he would buy another called a Fuji X-T3 — I now know that Dima and I have a connection.  He tells me that he uses his cameras to shoot pictures but also shoot videos of his motorcycle racing events.  Even better, another connection.  That gave me an ear to chat with over the next 90 minutes while I wandered around, shoot images and had so much fun.

If your interested, I always try to eat local — not quasi local, like a German salad, no, local.  So I ordered a Bratwurst Mixed plate — 5 different types of Bratwurst, potatoes, sauerkraut and some kind of secret sauce. 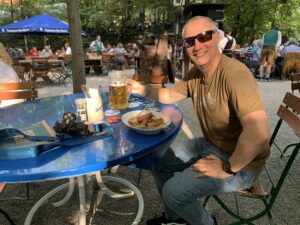 continue our chatting about motorcycles.  Generally, all I have to do is open up about my trip and you get an automatic opening.  In this case, I was equally interested in his semi-pro career in moto-racing.  He spends virtually all of his earnings doe to pay for his two loves; camera gear and tires, brakes and maintenance to feed his passions — and this little munchkin makes very little by way of earnings.  Anyway, it was so great having someone to spend my time at the Biergarten.  If your interested, you can visit Dima’s Instagram @fly.d17

To conclude; yes, I did drink about 3/4 of my 30 oz mug of beer, I felt on the verge of being wasted — and better, I think I had to take a piss after like a local — at least I think it was because of the beer — Anyway, I had a great, great night in Munich.