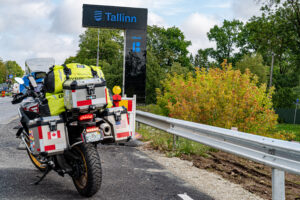 I know what you’re going to say, can’t you think of a better headline for the post, like really, hurry up and wait, how lame?  I have to say, in this case, it’s true, it’s now August 15th, and I’m hanging around waiting to get going on my next leg of travel with a new group of strangers — albeit, sharing a common interest — here is the back story.

My last post was while I was in Krakow, Poland and I visited Auschwitz, that life altering visit.  Leaving that town, I left somewhat quick even though I was really impressed with the place — although frankly, I just got in and got out worried that I had to respect my countdown to the August 15th kickoff.  Manfred had told me that Krakow is a place worth touring — no time, so I thought — bummer.

Lets go back even further, I left Paula in London on August 1st, one day earlier than I had originally planned because I really 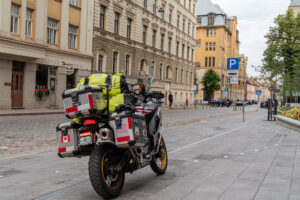 did not know what was ahead of me in order to get to Tallinn, Estonia, the top of the Baltic States and the jump off point for the  tour into Russia — its actually, the neighbor country bordering a day or two into St Petersburg, Russia.  I planned roughly my trekking route in London, but my future was wide open – not knowing if it was going to rain along the way, and if so, for how long I might be delayed —  else, what would catch my interest and I thought that I could stop, smell the roses and move on — well, that was not reality.  The real story is that as the time got closer to the 15th, I got more and more tight, even anxious and wanted to ensure that nothing could stop me from getting into Tallinn, on time — to the point where I kind of screwed myself.  I rushed visits to towns which seemed interesting in some cases, spent time in other locations where I could have moved on to another interesting city or town and in the end, messed up my timing and got to Tallinn too early — and now, worse, the group kick off is really not starting until the 17th — two days later than any of the riders I met were anticipating.  If I had to be totally honest, I really should have booted over to Amsterdam early on, just after landing on mainland Europe, then after Germany, I should have gone to Switzerland.  Would have, should have…  But I’m getting ahead of myself here.  Let’s just say that it’s the morning of the 15th of August and I’m  ready to move on.

After leaving Krakow, I booted over to Warsaw, the capital of Poland.  Again, Manfred had told me that Poland is the new 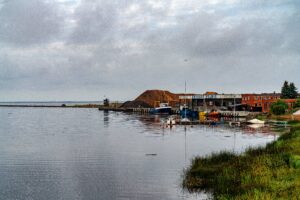 European powerhouse — and as I am learning, I think he is right, well, of course he is right.  The infrastructure is virtually brand new as I discussed, and that includes roads, highways, gas stations, bridges and buildings… You get the idea — Poland is starting its growth stage in a big way.  Trying to get a handle on Warsaw, Polands largest city is not easy.  Look, in some ways, Warsaw is a 50% modern functional city — not like a fully modern place since its pretty big and there are lots of signs of old buildings and historic unrestored eye sores.  When looking inside some of the stores, they are still a mix of archaic process, messy and unkept strip malls and in other cases, fully modern, so let’s say Warsaw is 50% modern.   That’s pretty huge progress 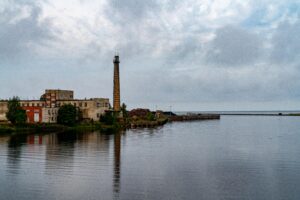 considering that this country has the same population of Canada at about 38 million people, a place with a strangle hold from the USSR for dacades and a history where it was beaten the crap out of — from the hands for Germany and Russia during the second world war.  I settled into the Weston hotel comfortably with its executive lounge and ok location.  Like any larger city, its hard to get a great location because no matter what, you will need to boot around in a car to get anywhere.  My hotel was really in the financial district next to 30 or 40 story glass buildings headlined by EY and Deloitte and others. As a for your interest — some of the newer buildings are modern glass and steel, but not very tall when compared to North America.  I was paying about $100 per night and not in the touristy hub, so that was eh, not great — but the price was great.  I really did not get a great feeling about my stay because I felt barricaded too much and I really did not want to jump on George every time I was getting out and I needed a break.  Two days in Warsaw was enough and quite honestly, wasted time. 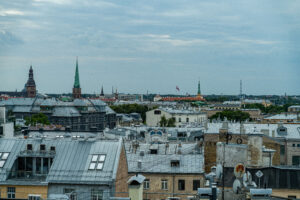 I now had time to think about my next city to visit and unfortunately my decision was aimed at any location to get closer to Tallinn — again worried that some unknown event would mess up my timing.  I chose to boot over to Vilnius, Lithuania, its capital.  My choice of a second location, which I should have traveled was to Minsk, Belarus.  I did some research and Minsk looks like another very modern, new, exciting and very youthful location, a place which I’m pretty sure that I would never visit otherwise, but again, the stress of moving closer to Tallinn took over and I was still a distance away from Tallinn, that I wanted the security blanket of getting closer — mistake, but can’t go back now.  But then again, it was a full days ride to get into Minsk and another full day to Vilnius — so two days taken out of my end goal.  That was the stressful decision to make — I chose safety.

Vilnius is nice, not much more to say.  It’s small and it’s the first of the 3 old Soviet Union Baltic States; Lithuania, Latvia and 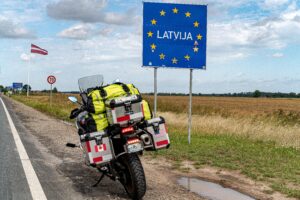 Estonia — in order of distance to mother Russia. I was pretty uninspired by Vilnius although its not bad, but I think it was the first time that I felt like I was getting closer to Russia.  The buildings were both historic European and rectangular purpose built utilitarian with Russian influences.  It’s only been about a week since I stayed there, I’ve almost forgot the place — kind of sad, but I’m not sure that I care much.

The second stop of my Baltic trail was to Riga, the capital of Latvia.  I was a bit more surprised by that city, its located at the 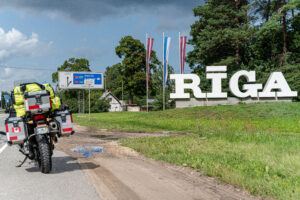 top of the country by the Baltic Sea.  The riding again was not too inspiring and long.  Roads were all very decent but getting edgier compared with Poland, Germany and other more advanced locations.   The surroundings were really only just trees, open unused land with the pop of an occasional farm — but mostly trees and fields.   That said, as I got into the city, the world changed radically.  Lets say that outside 10 miles of Riga, you’re definitely in the countryside or a bleak Russian looking building or two.  Commercial and industrial buildings are the standardized aluminum square box — some large, some small, but very simple and often unkept surrounding.  Once I got into Riga, that all changed and the core of the city was actually nice, clean and becoming gentrified and that’s where my AC Hotel was located — really the epicenter of the small city.  Again, I paid $100 per night and that included a full breakfast in a very newly built, 2 months old — and an extremely modern hotel.   Immediately upon parking George in front of the hotel, taking my bags off, I met a guy who was clearly American.  We started talking and he was super 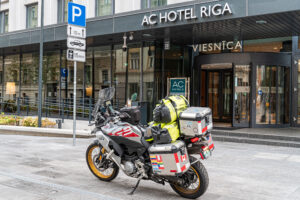 interesting.  He and a few other guys that I also met later work for the United States Military as a liaison to the host country between the US and in this case, Latvia on behalf of the military.  He has traveled the world, living in Germany spending weeks at a time to build relationships between governments and militaries around the globe and the US military.  Great guy and we chatted for probably 20 minutes.  He loves Latvia and thought that he and his wife could easily relocate there as his new hub — although the weather in this part of the world gets fucking cold in winter and apparently not so warm in the summer, but my military buddy hales from Wisconsin, another cold and rural location so I can see his perspective.   I can honestly say that after hanging in Riga for two days, my impression does not echo my military buddy — its a small, bit backward and super, duper quiet Scandinavian place in really the middle of nowhere. 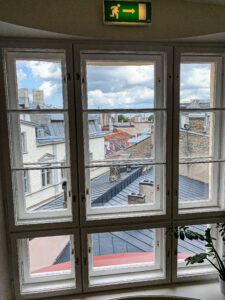 I had a few wish list items on my mind to achieve while in Riga and first was to get a haircut and second was to get my laundry of two weeks completed and last, get another pair of jeans because the weather was changing abruptly such that the mornings were getting a bit of chill in the air — catching me totally off guard and unexpected.  Getting jeans is fucking crazy since I have sent back all my long pants a few weeks back because my estimation was that I would miss the cool weather — oh, not so.

I was now in shooting distance of Tallinn so rushing to the end has now turned into coasting and in fact, I had excess time — mainly because I’ve really have had no obstacles like rain, breakdowns, food poisoning, a plague of locusts,  or whatever could have messed up my travel plans.  So I walked the town of Riga quite a bit, had a great dinner at a restaurant and music pub packed with 20 and 30 somethings — that was great.  Other things that come to mind is that I can see that Riga is another of those small cities with in this area with a incredibly tiny gross domestic product, one of the smallest incomes per capita in Europe and fighting to modernize.  I liked the hotel’s daily rate and 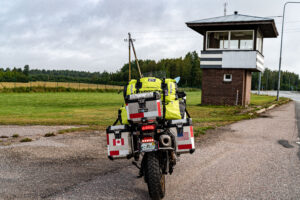 situation so much that I decided to stay an extra day — specifically thinking that in less than a week, the tides will factually change the the comfort will disappear abruptly as we head into Russia.

You know you’re in the former USSR when you cross the border between Latvia and Estonia and what do you see?  an entire row of guard houses, intact as they were during the Cold War era.  At first, I was not sure if I had to stop and they were still active.  It actually took me back for a second.  Its not like in Berlin 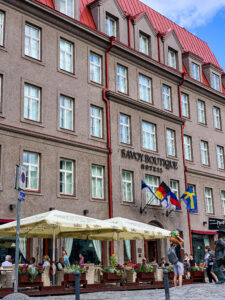 where its a visitor show — these were for real.  Not exactly sure why on earth they never took them down and bulldoze them.  I moved on.

Its now time to haul into Tallinn, finally, and I suppose — end the first phase of travel which has taken me from South Florida to Toronto to London, UK and then across Europe to the North East Scandinavian country which immediately neighbors Russia, Finland and Latvia.