Feature image is of a wall of retail bags with probably 50 or more individual types of Haribo gummies in cherished rows and rows of these delights. 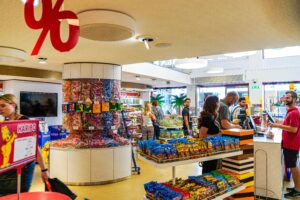 I’m here to try and answer the age old question; what is better, Haribo Gummy Candy or the German Autobahn?  Some of you may think, who cares?  Well, I don’t like you people.  I am talking about two very important emotional tags which go deep into the heart and soul of any breathing human being.

Of course Haribo gummy berries are a staple in our home in Florida for almost a decade.  I buy 5 pound bags and keep jars filled throughout the house — even though they are eaten daily by me and I think even GP sneaks a few.  I have become quite the efficienato of Haribo gummies and gosh, it makes life so much a better.  When I found out that its possible that the giant manufacturer of these gift from the gods may be on my route between London and Tallinn, I made sure it was 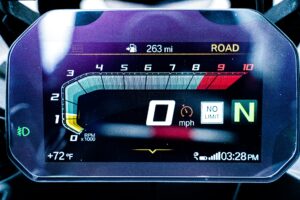 going to happen — hopefully visit the factory on a tour and get my share at the outlet store in Bonn, Germany.

Riding the Autobahn for any normal coded male (and female) is the ultimate in auto euphoria.  So what is this Autobahn which brings so much emotion out of any able bodied driver?  Let me explain in one word; speed.  “Autobahn” loosely translates from German is “Highway”, so nothing special there.  The unique and best part of just saying the word Autobahn is that in roughly half of the tarmac, there is no speed limit — Unlimited Speed.  More about this in a bit.  Check out the image of the LCD panel from Georges dashboard — the word “NO LIMIT” is a speed limit that you don’t see anywhere in the world that I know of.

With that said, I took off from my hotel in Gent, Belgium at around 8:30am and planned to get as close to Stuttgart as possible.  The goal was to go on the 3 hour ride to Bonn, see what is possible with Haribo tours or whatever.  Then following that, I was going to ride over just a half hour over to Wunderlich, the third-party manufacturer of BMW motorcycle parts to get some items which I need.  The cost of buying directly from Wunderlich in Germany vs USA is almost half cost.  I need a comfort seat, a protector for my front light and clutch and a fifty percent savings is well worth the ride there.

I did have some experience a few times over the years riding the Autobahn with Paula and I took a picture of my driving over 200 kph and kept that as my screensaver for a while.  Then a week ago, I drove it to Frankfort from Brussels in a automobile on a side trip.  But going at least 110 miles per hour (sometimes faster and I won’t tell) on a motorcycle and your being passed as if your standing still by a ton of cars blowing enough air to almost knock you over, that is just a raw emotional feeling that you should not forget.  I honestly have to remind myself that I am going at limiting speeds.  George handles a cruise of 90mph – 95mph with joy.  I have to admit, at 110 or greater, George is asking me to slow down and start using the other side of the brain — the part that actually thinks of consequences.  I tend to listen to George on this matter – but a few seconds later, I forget about Georges advice.  Anyway, if you dont get it by now, riding the Autobahn is just so much fun and I wish it would not end after leaving Germany — but it will.

I got to the small city of Bonn, about 300,000 people, found the Haribo outlet store which was on my map as the “outlet store” and I would not say that I was shaking, that would be bizarre, but I was so excited.  I parked George, walked over and asked about factory tours.  Nice young man told me that this is no longer possible, but I could go to town at this discounted shop in heaven.  So I did.  I walked around at a pace which really was not normal — my eyes were spinning and darting like a psycho — my camera shooting tons of images.  Anyone watching me would think that I was a madman and probably should be committed.  But who cares about those haters, I was having so much fun checking out the hundreds of varieties of gummies in a store about the size of a Hersheys retail store.  I ended up buying about 20 pounds of delights, a couple of gummy bear key chains and a 4″ plastic Gummy Bear desk weight.  As for age, yes, most were school kids again and most adults were hosting their kids.  Do I care?  Not at all and I feel bad for all the universe of adults who gave up their childhood too early.

Leaving the Haribo store and town, I was feeling so great — but also confused on what I was going to do with those heavy bags of candy that I now have to deal with — ship back to the states?  There goes the savings for sure, but on the other hand, its kind of fun eating candy when I get back that I bought directly 5 miles from the factory.

I did go to Wunderlich and spent a good 2 hours there and that was fun going into a small town really in the German countryside, far way from any cities.  I bought the parts and it was raining so I took off to my next stop, a hotel close to Stuttgart.  It was spitting rain so I was extra cautious and the speeds were drowned out to a cautious 60 mph.  I decided to stay in the small town of Heidelberg, just 45 minutes from Stuttgart because it was getting late — I finally got there at 7:30pm, just in time to get some food and go to sleep — long but exciting day.

Anyway, the answer to the question…  Haribo vs Speed.  Well, I think that I will play politician – I love them both equal.