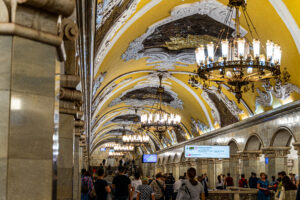 Feature image is of one of the historic Moscow subway stations.  Notice the ceiling details with stars and other Russian symbol inset along with lights — Just beautiful feeling in station.

This morning I met up with Karin, Stefan, Charles, the two crazy Swiss, Marten and Bruno along with Rolf to go on a tour of the 5 or so famous subway station stops.  The Moscow subway is sized about the same as any larger city in this case, in a circular ring format.  It dates back to the 1930’s and after visiting and using the system for probably 6 or 7 stops, none are modern — all are very utilitarian and seem to work.  Hallways are very wide and traffic of people is light for a city of some 12 million inhabitants — not exactly sure why.  Trains locomotives and the cars are very old and loud and I’ll add, shaky when inside moving at seemingly higher speeds than the normal ride in other countries.

Anyway, the feature here is that there are 5 or 6 stations which were built in between the 1930’s and 1950’s which are 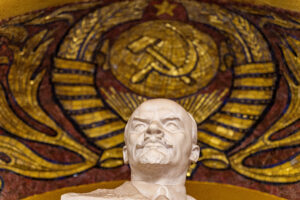 incredibly ornate and detailed with artwork, sculptures, detailed tiles, chandaliers — each station as different as possible — some art deco, some just paintings on walls, ceilings or even in the tile, some include hundreds of sculptures of the story of Russian plight or whatever….  I’m told that they were used as bomb shelters during the Cold War and I can see that in a way, each station is very large housing these beautiful pieces of art and design.

Charles and I shot lots of images while Karin and Stefan took in the atmosphere and mostly waited relaxed on Charles and myself.  After the second or so station stop, we lost Rolf and the two Swiss — they went shopping or something.  Karin, Stef, Charles and I went on to complete 4 more stations — each time by riding to the next 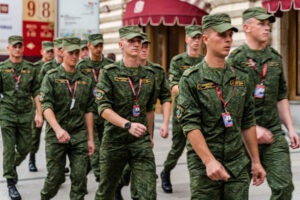 stop on the 1950’s subway cars.  If not for Karin putting on her thinking cap, I would never know where to go because like any large subway, there are probably 4 or 5 lines to chose from and also the stations which we sought were sometimes 3  or 4 stops away but in this case its all written in Russian and that amps up the difficulty standards out of my league — I just relaxed and let the others drive.  It was fun and interesting. The worse part was that at each station we finally arrived to shoot pictures, so to did 1,000 Chinese groups come to visit and they as in all instances everywhere on earth swarm and ruin the moment — but what the heck, they are there to tour the relics of the past too.  I waited for the 5 seconds when I had time for them to leave and the next group of Asian stops arrive and explode on the scene to take my pictures.

After an hour or two of riding the stations, we had a bite for lunch outside the giant station building — I had a Diet Coke since 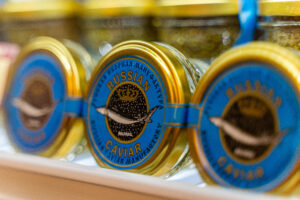 the food choices were not that appetizing for me — some fake Italian restaurant which looked like it was plastic food.  I did notice that my eye piece of my camera had fallen off somewhere in the past half hour and that is not good.  It means that if I shoot pictures, the light will shine and I will see a reflection each time I look into the eye piece lens.  So I looked up in Google for a local Sony camera shop thinking that I had a 5% chance of finding this small piece needed to replace and repair.  I found a shop about 5km away which looked like it had good ratings so I decided to leave Charles, Karin and Stef behind and taxi it to the shop.  The taxi ride was long and waved through the backstreets of Moscow and I liked that since I got to see a different side which I had not prior.  Finally arriving at Pixel24, the camera shop — which was tucked well behind a small door which was unmarked and took me a good 15 minutes of trying to communicate with locals to help me locate, I managed to get to the shop 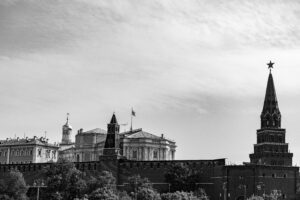 which was small, but fantastic.  The camera shop had as much inventory of current products as you would see in any shop in Miami — probably more.  Incredibly enough, they had the $30 piece which I was looking for and it fit perfect.  Had I not found this part, I would have been shit out of luck, probably for the entire tour since I don’t see too many locations where I could get a replacement between here and Bangkok.  Anyway, it all worked out.

I got another taxi back to the hotel — $15 USD for a one hour ride back — a fair price I think.  I got to see a great slice of Moscow on this ride and I thoroughly enjoyed it.  My friendly driver did not speak a stitch of English like most of Moscow residents don’t, but it didn’t matter, we each had a role; his to drive me and mine to just enjoy the ride.

Dinner that night was at a nice restaurant just a few blocks from the hotel.  I ate a broiled sea bass which was tiny, whole including the head and was bony but it was fine — the tiny amount of meat I could muster.  The scenery of the restaurant was interesting in that it was packed with probably 20 tables or more and housed inside a very old pharmacy with high ceilings, the entire room painted in white and dating back to the 1920’s I would estimate.  Plaster moldings on the ceilings and walls are abound and are simple but give you the feeling of living in that era.  I sat at a table of 7 with Feroz, Amina, his wife and resident of his rear seat during this tour, German Marten, Karin and Stefan.  The two of Marten and Feroz had a strong disagreement just a few hours prior in our team meeting — well it was more like Marten went after Feroz like a dog to a bone and Feroz barked back politely —  but all was good again on the surface.  Discussions focused mainly on Muslim life today.  Amina is a deeply religious muslim lady, she does not drink, no meat, preys 5 times per day — every day, lives a very strict muslim life.  Feroz is 80 percent religious except he drinks alcohol and seems to be a bit looser.  The restrictions on Aminas life is long and hard for a disbelievers like the rest of our table to ever understand but tonight was not about questioning — it was about learning another side.  Marten took the same tact although you can see Marten is definitely not understanding the scene.  So we spent most of the night learning about their life as Muslims.  Today both Feroz and Amina spent the day at the local mosque here in Moscow — a giant congregation according to the two experts and we saw pictures of thousands of visitors to the house of Allah today since it is Friday, the holy day in that religion — like Sunday to Christians and Saturday for Jews.

A topic of disbelief during dinner which took maybe the most attention was when we started talking about polygamy in the Muslim faith — having multiple wives.  Wow, what a topic — and the two teachers at our table were serious about the fact that it’s possible and legal in their faith.  As long as the man promises to treat each wife equal, it is allowed — although maybe not that common today, still, it is not unquestionable.  Amina, a very serious lady who always includes some religions topic in her conversations agreed with Feroz in that it’s fine to invoke polygamy if the circumstance is ok.  Feroz used the example of Ashley Madison, the web site where married people have sex with one another, enabled by the site.  Just by way of background, that site was my customer in our data center and they do make tons on the service along with their 10 other high traffic deviant content sites.  Anyway, Feroz was pointing out to the hypocrisy of Christins who say its bad to have multiple wives but its ok to fuck around behind the backs of their spouses — in muslim law, it is all out for everyone to buy into — I guess it really means, for the man to buy into.  Conversations were all eared by the non-muslims with the utmost respect and nobody questioned what were hearing on many topics which seem strange to western cultures but were totally normal in the lives our our two observers… That was fun and interesting.

I did learn something interesting about German religion and background.  It is a law enacted in Germany that all residents must pay a 5% tax to cover the cost of managing, restoring and maintaining churches, mosques, synagogues or any house of faith — baby its used for other religious purposes, but the idea is that church and state are tied together.  Should a German resident declare him or herself a non-religious person, they need not pay this tax.  So each of Marten, Stefan and Karen all signed documents to the state envoking their right to leave religion.  Karin told me that she signed the papers at age 16 when its legal to do so.  None of the Germans at our table have any association with religion.  That is an interesting law and response to the law.

The night ended walking back to the hotel and to bed for the ride out of Moscow tomorrow morning.