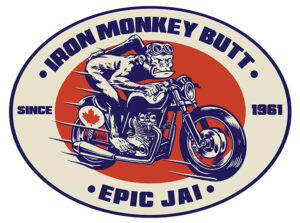 It’s been bothering me, and I just had to deal with it.  The need to give an inanimate object a human name to give it life — its that simple.

I’ve been referring to my 2019 BMW Motorrad F850GS Adventure as my “bike” or as the “motorcycle”, most recent as the “Iron Monkey Butt” and even the “Monkey Butt”.  I don’t know, it all feels so wrong.  This kinetic piece of moving art needs a name and I shall call it, “George”.

Now, why George?  I gave it all of about 5 minutes thought while trying to sleep on the plane ride to London and here’s why.

Two cartoons; first is George of the Jungle, that 1970’s hit on Saturday mornings, well maybe not a hit, but anyway, it was a popular cartoon.  George was a gorilla and had something to do with the jungle I guess, I really can’t remember, but here is the rub, my friend Sheldon’s neighbor was a little German boy who immigrated to Canada, named George.  His dad was so German that in the 1970’s he had a Mercedes diesel automobile — and at that time, nobody had a diesel unless you were super German and never forgot about the fatherland.  Anyway, German, George, Monkey…  Thats one reason.

Second reason is another hit cartoon, Curious George.  I guess, specifically a book by that name.  Again, I’m no expert but George was a monkey who was curious?  Adapting it to the F850 and even me, I guess we’re both curious and like to explore — huh, how is that?  Who cares, it sort of works.

Last reason, I like the name.  It just fits for a pile of metal parts which combine to make a whole lot of adventurous fun — George, the Iron Monkey Butt.

So from hereon in, I will be referring to my bike, the F850, the F850GSA, the BMW, my motorcycle or the Iron Monkey Butt… as George.

George and Phil will have some great times ahead.